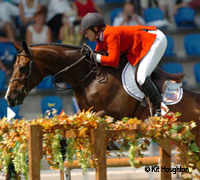 Beezie Madden and Authentic during the 2004 Athens Games. The pair is back for the 2008 Games.

As the opening ceremonies for the 2008 Olympic Games get underway on Aug. 8, notables in the equestrian world had a celebration of their own. On Aug. 5, the equestrian events of the 2008 Olympic Games were presented to an array of distinguished guests gathered in Hong Kong to honor the achievements and sporting successes of all those who will be competing on the field in the upcoming days, and those who have helped behind the scenes to bring it all together.

The Federation Equestre Internationale (FEI) President HRH Princess Haya, and FEI Secretary General Alex McLin attended a dinner at the Hong Kong Jockey Club/Beijing Clubhouse, where notable guests such as International Olympic Committee (IOC) President Jacques Rogge and former IOC President Juan Antonio Samaranch, as well as former FEI President Doña Pillar and representatives from the Beijing Organizing Committee for the Games, the Equestrian Company, the Hong Kong Government and the Hong Kong Jockey Club were also united to support the endeavours and efforts that have characterized the lead up and preparations for the events in Hong Kong.

HRH Princess Haya confirmed the great collaboration over the past two years. “This short timescale has made no difference to the preparations because of the close partnerships we have enjoyed working with such enthusiastic and dedicated associates. President Rogge has said that this Games is a historic moment for the Olympic movement and so it will be for horsesport.”