I was drawing up my vaccine doses for a farm call while the barn owner, a nervous woman named Lauralee, was fussily catching horses and moving them to their individual stalls for their checkups and spring shots. The farm cats wound around my ankles and stood on their hind legs to inspect my tote. One explored the innards of my work truck, finally curling up to sleep on a grubby Carhartt coat on the back seat. I made a mental note not to drive off with the cat at the end of the visit. 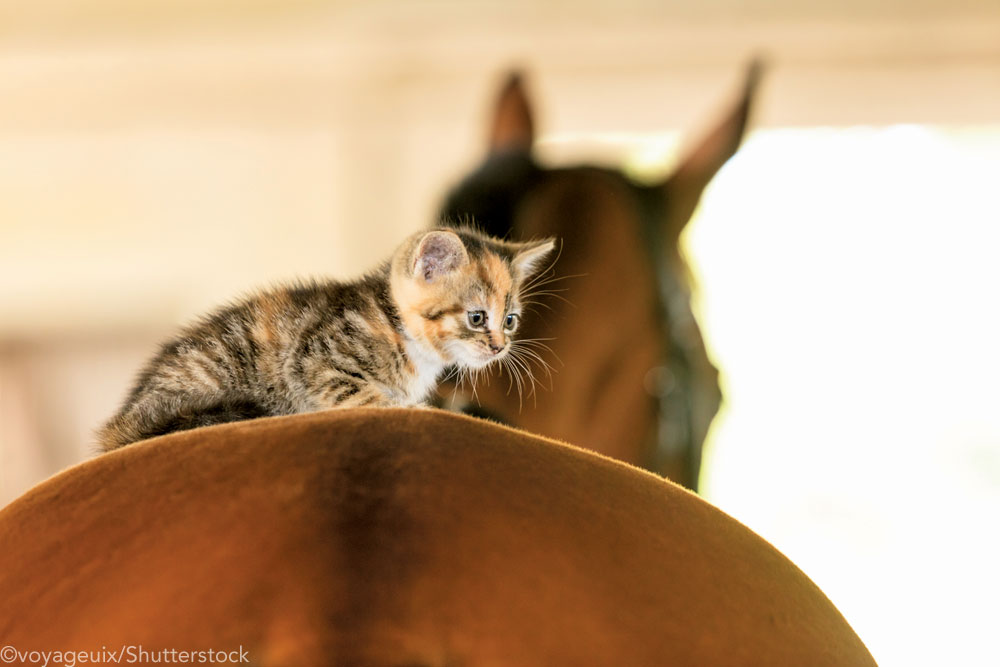 Tote in hand, I entered the barn. Lauralee was in full swing.

“Courtney, I’ve collected and bagged manure samples and labeled them. They’re in the refrigerator. The farrier adjusted Ricky’s angles because his hips were popping, and he explained that he needed to add some compound to the toes and put special shoes on because there was an imbalance, so I just need you to make sure the hip popping has stopped.

“Babe just isn’t herself, so I’ve talked with Dr. Yesman, who felt that she needed bloodwork, and also to check her urine, so we need to collect that. I also want to X-ray Everett’s left hock, not the right, because I called Dr. Brilliant and she thought the hock was the problem, but I don’t want the full series, just two views that she said gave the most information, because I really can’t afford to spend a lot on her or any of the others because my husband says you charge way too much. So that’s our list so far. And Dr. Amazing will be out tomorrow to check teeth and do dentals.”

I shook my head. Lauralee was a notorious pain in the rear but in the past, I’d at least been asked to examine the horses and offer my opinion, and since she paid her bills promptly, I’d kept her as a client. But this was too much.

I knew of Drs. Brilliant and Yesman, and was generally appalled by their medicine, and Dr. Amazing traveled through the area once a year doing teeth and taking a great deal of work away from the local vets, so I was no fan of his either. There were many excellent referral vets in the area, so why did this woman always have to latch on to the dodgy ones?

I insisted on doing exams before I’d consent to any diagnostics and on cue, Lauralee fussed about the cost and again quoted her husband who thought vets (i.e. me) were too expensive.

I looked slowly around her brand-new barn with custom rubber floors, shining tack trunks in front of every stall and a tack room full of expensive equipment. The feed room was stuffed with every pricey supplement, treat, cookie, top-dressing, oil, grain, cube and pulp on the market. The recently finished indoor arena stood nearby.

I gritted my teeth and began my exams. Ricky’s distorted feet were grossly imbalanced with poorly fitted shoes, the expensive compound stuck to his toe was falling off, and he had a suspicious painful swelling over a fetlock. Everett was lame on the right front, not the left hind, and there was a thread of heat running up the inside of his cannon and swelling and pain to palpation over his splint bone. Meanwhile Babe was in raging heat with normal vitals and urine staining down the insides of her hind legs.

Lauralee didn’t care. She wanted her tests, so I shrugged, drew blood and collected urine from the screaming and squatting Babe, X-rayed the wrong leg on Everett, and made sure Ricky’s hips were OK. Lauralee texted three days later demanding hard copies of the X-rays and the labs.

Cat’s Out of the Bag

I had to go back out a few days later, and Lauralee let me know that she’d Googled the (totally normal) bloodwork and urinalysis. She had a list of diseases for Babe, a diagnosis for Everett from Dr. Yesman, and she’d sent copies of Babe’s labs to a homeopath. And I’d forgotten the manure samples in the fridge.

I fetched the poop samples and abruptly decided I’d had it with Lauralee, her poop, and her Googling. Grandly I marched over to her, handed her the baggies and told that I would no longer be able to provide veterinary services for her. She stared at me, for once shocked into silence, and with great dignity I wished her well and drove away feeling pleased with myself.

I was several miles down the road gleefully reliving my speech when something landed in my lap, scaring me so badly that I almost drove into an irrigation ditch. I’d forgotten to de-cat my truck when I’d made my amazing exit, and I’d accidentally stolen Lauralee’s barn cat.

Great. Now I had to go return the cat. Could I leave him at the end of her drive? No, he could get hit by a car. Maybe I could hike up in the dead of the night and run for it after dropping the cat near the barn? No, they had several dogs who would surely sound the alarm.

Slowly, I turned around and headed back to her place. As I pulled into her driveway and stopped at the gate, her stone-faced husband pulled in behind me in a brand-new Audi S5 Cabriolet. He tailed me up the driveway, goggling as I got out and set the struggling cat on the ground. Mercifully Lauralee was nowhere to be seen, and I drove off quickly. I looked back when I reached the end of the drive and the husband was still staring after me.

It somehow seemed an appropriate, albeit ridiculous grand finale. And if I’m being completely honest, this is often the story of my life. Vet practice is always ready to take us down a few pegs, and on days like this, I figure that I must be the most humble person on earth.