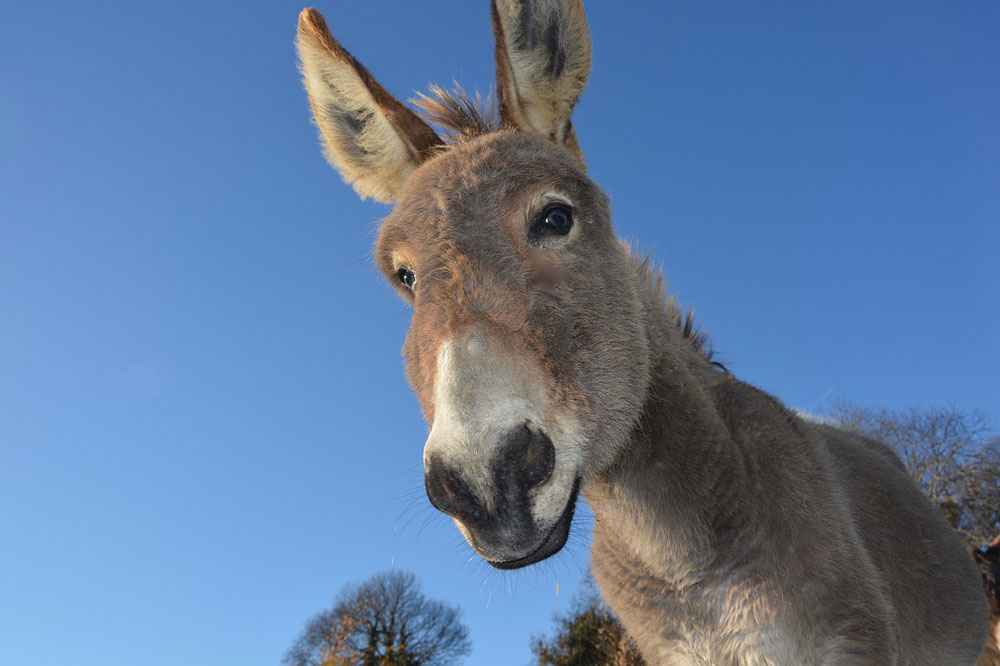 Our fearless vet plays a game of catch as catch can with an untrained donkey.

The woman was not someone I knew, but she sounded nice enough on the phone.

“Hello, Dr. Diehl. I’m very worried about my donkey. I’ve had him for several years, and I’ve never seen him act like this.”

“What seems to be the problem?” I asked.

I explained that donkeys could not vomit, but wondered if he might be choking, a condition where feed gets stuck in the esophagus leaving the animal unable to swallow, producing a bilateral nasal discharge.

There was a confused silence on the other end of the phone, and I tapped my fingers on the desk. The silence grew longer.

“Or perhaps he’s refluxing.” I suggested into the silence. I explained the phenomenon in greater detail, warming to my topic, but the sound of her sniffling stopped me.

I realized that my long medical descriptions were just confusing her. Ashamed of myself, I quickly offered to come see the animal as she sobbed quietly. If I rearranged my afternoon calls a little, I could just fit them in, and she sounded relieved as she gave me directions to her place.

I drove up to the small farm, and could see my patient far off in the field, three alpacas grazing nearby. Annoyed that he wasn’t caught and waiting for me, I parked my truck, set the brake and marched over to the owner to explain a few things about being ready for the vet. My day was very tight, and I didn’t have time to chase an untrained donkey around a large field.

She looked at me blankly when I asked where the holding pen and stocks were. I suggested a halter, but she didn’t have one of those either.

“Oh, I don’t think he’s ever been haltered, Doctor.”

I looked at her. “How am I supposed to examine him if you can’t catch him?”

She shrugged. “I thought you’d be able to sedate him or something.”

“But we still need to catch and restrain him safely for that. And he’s never been haltered before?”

She started to cry again. “I’m so worried about him. Is he going to die?”

I studied the far away figure grazing happily. “He looks pretty comfortable from here.”

“What should we do?” she sniffled, her face blotchy.

I sighed and went back to my truck. I had a lariat, which I wasn’t very good at using, but had made a few lucky snags in the past.

“Let’s walk out and try to catch him.” I said. She cheered up and trotted along next to me. When we were about halfway to the animals, something occurred to her.

“Maybe grain would work on him!”

She looked at me blankly. “Oh, I don’t have any. I thought you might.”

I explained that I didn’t carry grain, hay or other feeds in my vet truck, nor did I have any hiding in my heavy coat.

We trudged along through the tall grass, and I noticed we had entered a swampy part of the field. Quickly my leather boots were soaked through and so were my pant legs.

She made a squealing sound as the mud sucked at her feet, and suddenly I realized that she was wearing high heels. How this had escaped my notice, I wasn’t sure, but perhaps being expected to catch a feral untrained donkey in a 30-acre field with the grain that I didn’t have in my truck had distracted me. I asked her if she was OK and she nodded, then asked if Prada shoes were OK to get muddy.

“Probably not.” I said. She nodded and studied her muddy feet thoughtfully.

“I’m just going to run back to the house and change. I’ll be right back!”

And off she went, leaving me alone in the large field. To her credit, she tried to hurry, but when she was halfway to the house, she tangled her heels in the long grass and fell face-first into the wet mud, disappearing briefly from sight before struggling back to her feet and continuing on.

It was a full 15 minutes before she appeared again. This time, she was wearing a pair of ranch coveralls that were foolishly big and a pair of irrigation boots that flopped around her knees as she plowed her way across the field. When she reached me she was panting, trickles of sweat running down her face. The untrained donkey and alpacas had watched her progress with alarm, and had taken the opportunity to move to the opposite side of the field. We slogged after them, but they were on to us, and moved away as we advanced, always keeping several acres between us.

After another 25 minutes of this, I held up my hand.

“I’m very sorry, but I have other calls to get to today. We’re never going to catch him like this anyway. We really need a small pen to herd them into.” I hated to leave without examining the untrained donkey, but there wasn’t much else I could offer.

She nodded and beamed at me. “You’re right, Dr. Diehl. I guess he really does look OK from here, doesn’t he? I feel much better now that you’ve been able to see him.”

I wasn’t sure how staring at the untrained donkey’s rump while he determinedly moved away from me counted as seeing him, but at least she was happy now.

Then she smiled brightly.

“I know! There’s a litter of feral kittens in the barn somewhere. You can vaccinate them while you’re here!”

COURTNEY S. DIEHL, DVM, has been an equine veterinarian since 2000. She is the author of Horse Vet: Chronicles of a Mobile Veterinarian and Stories of Eric The Fox, first place winner of the CIPA EVVY award. She is currently working on her third book.

This article about an untrained donkey originally appeared in the February 2018 issue of Horse Illustrated magazine. Click here to subscribe!