Home Young Rider A Chincoteague Pony of His Own

Watching the famous Chincoteague pony auction in July of 2017, 13-year-old John Price wished he could bring home a foal—perhaps one with pinto markings. One by one, the foals entered the paddock that day while the herd of island ponies, many of them still flecked with marsh mud, swatted flies in a nearby corral. The quick words of the auctioneer rang out over the loud speaker, and foal after foal was sold to the highest bidder. 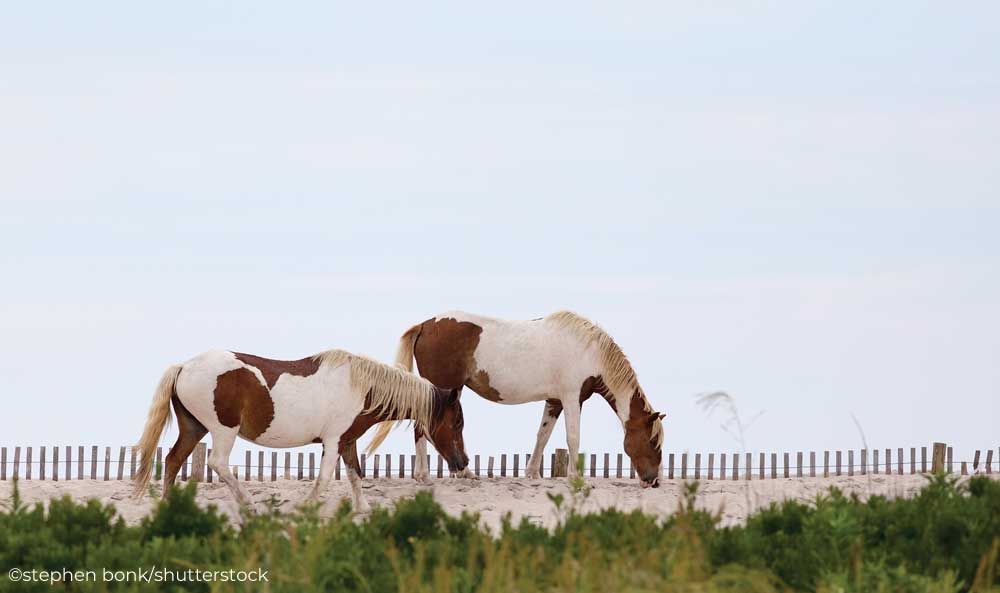 John’s parents made him a deal: If he committed to learning how to care for a foal, maybe they’d come back the following year and bid on one. They bought a book about Chincoteague ponies before heading home to Pennsylvania.

Over the following months, John read and learned about hoof trimming, feeding and halter training. The book about Chincoteague ponies also included information about the Feather Fund, a charitable organization that grants kids between the ages of 10 and 18 money to purchase Chincoteague ponies. Applicants must have their parents’ permission, be able to provide housing and care, and write a winning essay about their Chincoteague pony dreams.

In his 2018 application, John wrote about helping his family train their American Quarter Horse, Sam. He also wrote about the anxiety he sometimes suffers from and his community service work building a run-in shed for the horses at his local humane society.

Still, it was a longshot. As many as 50 kids apply to the Feather Fund every year, and only two are chosen. But in April 2018, John got a call saying he’d been selected.

“It was like my dreams were finally coming true,” he says. He studied online photographs of the herd’s new foals, creating a binder with photos and information. A black pinto foal stood out. He was sired by a stallion that John had admired the year before: Riptide, an eye-catching chestnut with a flaxen mane and tail.

In July 2018, the carnival grounds at the Chincoteague auction buzzed with excitement. The black pinto foal was the third one up for bidding.

“There were tons of people talking about how they wanted him and how much they loved him,” says John, now 15 and a freshman in high school. He worried that he wouldn’t win but kept trying. Soon the auction was over. John had won with the highest bid!

“It felt great to finally touch him and to just be there with him and have him know that I was going to be his new best friend,” says John. Two days later, the 2-month-old colt (John named him Riptide’s Bandit) was headed home. John slept in Bandit’s stall the first few nights.

“He was really nervous being away from his mom,” he says. It took a few days before the colt would let his new family get close.

A week later, John moved his other horse, Sam, from the farm where he’d been boarded.

“They became best friends,” John says. As Bandit began to trust his new family, he learned to wear a halter, lead, and pick up his feet for the farrier. John also taught him a few tricks after joining a local Chincoteague pony group. By winter, Bandit loaded onto the trailer again for a trip to the local farm store.

“It was hard getting him on the trailer, but once we got there, he walked in the store perfectly without wrecking the place,” John says. “He got his picture with Santa.”

Hopes for the Future

These days, Bandit, now a yearling, loves to follow John aboard Sam on trail rides. The experience of bringing home a pony from the Chincoteague auction has taught John a lot about patience when training horses.

“When he doesn’t do something exactly right, you can’t get frustrated,” he says. “You have to encourage him.” 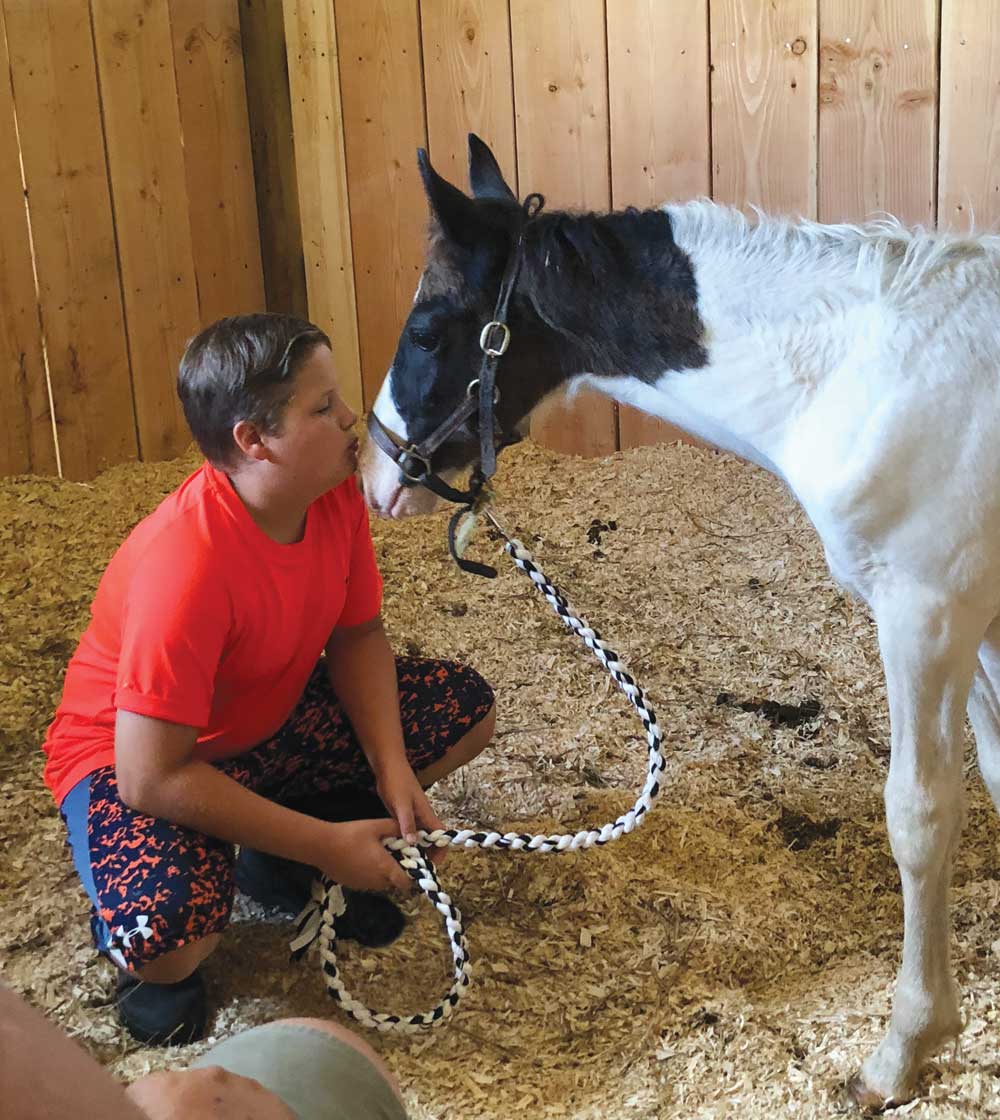 The two have a bond that John says nothing could break.

“Bandit gives me hope about my future as an equine trainer,” he says. “And he’ll be always be there for me.”

For more information about the Feather Fund, check out www.featherfund.net.

The Chincoteague pony penning tradition goes back almost a hundred years. Today, the event includes a dramatic swim as the ponies, who live wild on the marshy barrier island called Assateague, swim a narrow channel to the neighboring island of Chincoteague. 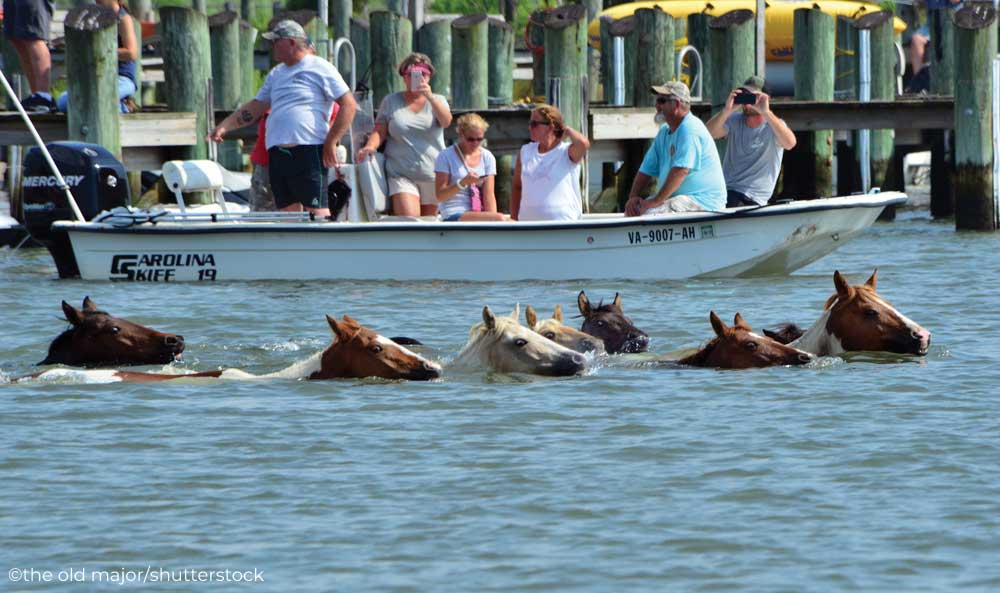 After the swim, 150 or so ponies climb up the muddy bank, shake off the water, and parade down Main Street to the carnival grounds to rest. The Chincoteague Volunteer Fire Department cares for the wild herd. Every year after the swim, they auction off a group of foals to manage the herd’s numbers and raise money for pony care. This July’s event will mark the 94th year of Chincoteague’s annual Pony Swim.

After visiting Chincoteague in the 1940s, author and horse lover Marguerite Henry wrote the now-famous book, Misty of Chincoteague. Published in 1947, it tells the story of siblings Paul and Maureen Beebe and their adventures in raising a wild Assateague Island-born palomino pinto filly named Misty. The story is based on actual events.

Two more books followed: Stormy, Misty’s Foal, and Sea Star: Orphan of Chincoteague. Still a beloved character on the island, you can see Misty’s hoof prints in the sidewalk outside of the Island Theatre on Main Street.

About the Chincoteague Pony

Spirited and surefooted, the Chincoteague pony likely traces its origins to many breeds of horses released to graze on Assateague Island hundreds of years ago. 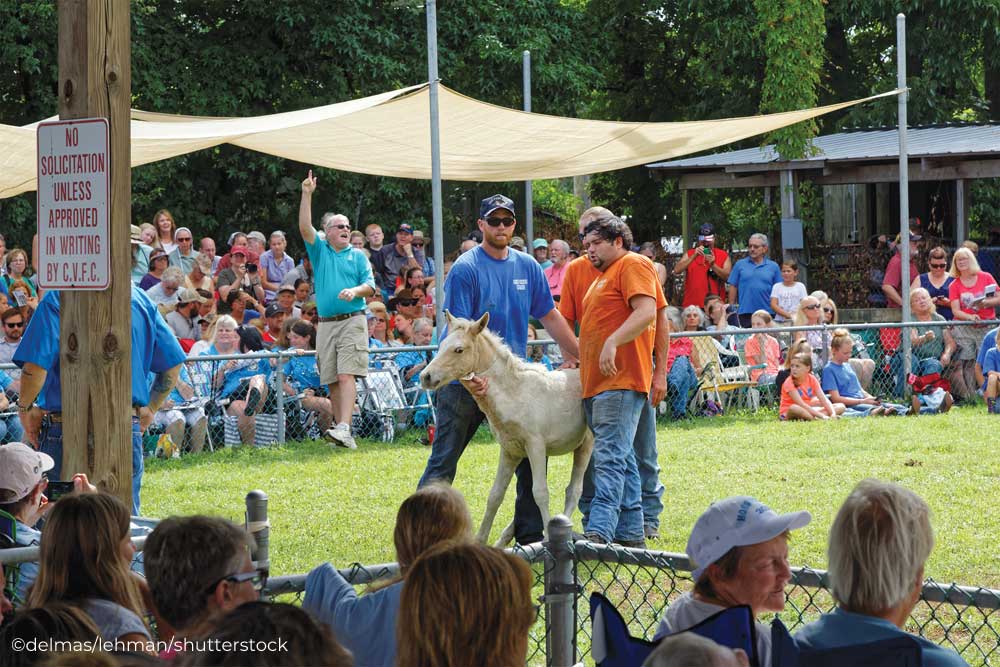 Some say the breed descended from Spanish horses that survived a shipwreck off the coast, but that account is likely more legend than fact. Two herds of these wild horses live on Assateague Island, separated by a fence at the Maryland-Virginia line.

A Young Rider from Down Under