Home Horse Illustrated All About the Gypsy Vanner

They are the stuff of legend: nomads who cross the countryside in horse-drawn wagons, reading fortunes and dancing by the campfire light.

Many people have this romanticized image of the Romani people, in large part because of Hollywood, which has portrayed them in films such as The Hunchback of Notre Dame and From Russia With Love. In reality, the Romani are an ethnic group that has traveled the world for generations, migrating through the Middle East and Northern Africa, eventually ending up in Western Europe. While some of their migration was by choice, much of it was forced as they were pushed out of one country after another over the centuries.

The culture of the Romani people is rich with music, food and art, and has been handed down through the generations. An important part of that culture was, and still is, the horse. While the Romani no longer need horses to help them travel from one place to another, their horses are still treasured as a link to the past.

Late in the last century, Americans discovered something the Romani people of Great Britain had been quietly keeping to themselves: the Gypsy Vanner. By carefully breeding Shires, Friesians and Clydesdales to the native Dale Pony, they had created a beautiful, compact draft horse to pull their vardos—brightly painted and intricately carved traditional Romani wagons.

The Gypsy Vanner was first brought to the U.S. in 1996. People fell in love with its heavy bone and broad body, all in a compact package. Though originally bred to pull wagons, the Gypsy proved to be a great riding horse, versatile in many disciplines.

Much of the Gypsy Vanner’s appeal lies in its striking appearance. The breed’s long, flowing mane, thick tail and heavy leg feathering are unmistakable, especially when combined with the Vanner’s small body. Although many Vanners come with pinto markings—often black and white tobiano—every horse color and pattern is seen in the breed.

Since the Gypsy Vanner arrived on American shores, the breed has proven to be successful in dressage, competitive driving, jumping, ranch work and on the trail. They also compete in Gypsy Vanner breed shows in a variety of classes, including western pleasure, English, hunter hack, halter and ranch riding.

Dressage is becoming particularly popular for Gypsy Vanner riders, and the United States Dressage Federation (USDF) recognizes the breed in its All-Breed Awards program, which is designed to recognize the accomplishments of specific breeds in dressage. In 2017, a Gypsy Vanner stallion named Starfire’s The Five Card Stud was named USDF All-Breeds Reserve Champion, beating warmbloods in the dressage arena.

This year, the Gypsy Vanner is celebrating 25 years since the breed arrived in America. To commemorate, the Gypsy Vanner Horse Society is holding its 25th Anniversary Gala in November 2021. Because the organization was established in Ocala, Fla., when the first Vanners arrived in North America, Ocala was chosen as the location for the event.

A stunning breed with an exotic history, the Gypsy Vanner is an eye-catching horse whose popularity is growing in leaps and bounds. Although somewhat rare compared to breeds that have been in the U.S. for many decades, the Gypsy Vanner is becoming so well known, it’s hard to find a horse lover who hasn’t seen or heard of it.

This article about the Gypsy Vanner appeared in the November/December 2021 issue of Horse Illustrated magazine. Click here to subscribe! 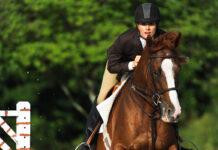