Home Tack and Equipment Tack To Bit or Not to Bit?

The idea of riding without bits isn’t new, but the idea gains momentum as many horses are ridden for pleasure rather than high-performance shows. The bitless topic almost always provokes debate.

Here, we’ve gathered input from industry experts with differing views. What’s the same is that all want what’s best for the horse and rider. Read on to find out if bit or bitless riding fits best with your riding plans.

If you want to show without tack regulations, online bitless shows may be an answer. Visit Nina Heller’s Bitless and Beautiful 501(c)(3) non-profit organization for show info and bit-free reasoning.

“The bit is a block between true mutual respect, trust, and harmony,” says Heller. “When you can do all the riding, training, and showing you like with the knowledge that your horse did it from friendship rather than coercion from things like the bit, spur, or whip, it is the most wonderful feeling—better than any prize or rosette.”

“I realized many, many years ago—in 1949—that I could start a young horse without a bit,” says Tellington-Jones. “I was the kid that would ride—and get bucked off—the new horses at the stable where I rode. One day an old man who saw me riding by his farm every day gave me a book written by an American cavalry officer. It showed how you could start young horses without bucking by ground-driving them. I found that instead of putting a bit in the horse’s mouth, it was better to drive off halter pressure. The horses understood much better.”

Tellington-Jones developed her own Lindell Bitless Bridle after looking at various hackamores and bosal options. The result is a side pull bridle with a round, stitched leather nosepiece and soft leather jowl and chin straps. In her new book, Training and Retraining Horses the Tellington Way: Starting Right or Starting Over with Enlightened Methods and Hands-On Techniques, Tellington-Jones says she uses the Lindell on young horses as well as those with sensitive mouths, and for any rider who has a tendency to balance on the reins.

Tellington-Jones poses the question: “Why would you ride a horse that was very difficult—even a runaway—without a bit?” In her experience, many horses who pulled on the bit acted much differently without a bit.

“It was amazing how horses that we thought were really difficult would turn around if they had the bit out of the mouth,” she says.

Should you ever ride with a bit?

“That depends what you want to do with the horse,” says Tellington-Jones. “I think most horses are much happier without the bit, but there are exceptions when it doesn’t work. If you have a high-headed, spooky horse who puts his head up, just using the bitless bridle isn’t going to give the horse enough information. I don’t think that bits are bad. If you don’t feel safe without a bit, keep yourself safe. If I’m riding on a safari in Africa and I don’t know the horse, I want a bit. Also, if you want to compete, you may need to have a bit.”

“I recommend using the bit over the bitless bridle you’re going to use,” she advises. “Start in an enclosed area. If you need more control, pick up the reins attached to the bit.”

And an extra note of warning: practice your stopping cue before you take off your bit. Make sure you can stop without pulling.

“English or dressage riders, don’t close the leg to go into the bit when you want to stop,” she says. “There will be no bit to stop into.”

Karen Rohlf teaches dressage combined with natural horsemanship and biomechanics. Rohlf says her Dressage Naturally training program has seen an uptick when it comes to horse owners’ awareness of and interest in horse welfare. She says many riders are questioning traditional methods and looking for partnership-based horsemanship.

She reminds us that no rider should be judged for their tack choices.

“Be careful, because a rider who rides bitless is not necessarily kinder or more gentle,” says Rohlf. “Likewise, riders who do use bits are not necessarily harming their horses. I am not really interested in the no-metal movement and have often been turned off by very dogmatic views accompanied by unfair videos focusing only on the tools and not the riding. I am interested in educated riding and being able to make choices that work well for the horse. I don’t want people to have the wrong impression that to be kind to your horse all you have to do is take off the bit.”

“I have had horses where a bit was a handicap because their aversion to it caused more training problems than it solved,” says Rohlf. “On the other hand, when used correctly on a horse that accepts it, a bit can offer a level of lightness, clarity, and refinement that may be missing without a bit, [allowing for] the most delicate aids and less confusion. In my experience, if you educate a horse and rider to be able to ride bitless, then when you do use a bit, if the horse accepts it, everything becomes even better.”

Rohlf’s first priority when starting a horse bitless is to connect with the mind and the feet of the horse and to use her hands and reins as little as possible.

“Mental, emotional, and physical self-carriage is the first goal,” she says. “After this stage, I look for healthy biomechanics by improving balance and alignment. The next stage is to educate the horse so he knows how to move freely within the contact of the reins and that he can trust my hands.”

When she does use a bit, Rohlf only uses smooth-metal bits and has a variety of snaffles, which her horses get to choose from.

“I love that I know how my horses feel with and without a bit, and that I am not restricted by rules of competition so that I can make choices for what is best for each individual,” she explains. “I tell my students to go to a tack shop and lay different snaffles on the fleshy part of their forearm, then squeeze it. You can easily tell the bits that pinch and the ones that feel smoother.”

Luke Gingerich competes in reining and ranch versatility and specializes in training horses at liberty. Gingerich’s bridleless freestyle reining routines have inspired others to achieve the same connection with their own horses.

“I think as more riders focus on developing the relationship and connection with their horses, they have been inspired by seeing what is possible when clear communication and the relationship between horse and rider is prioritized,” says Gingerich. “That’s different than only attempting to physically control the horse, whether through metal tools or otherwise.”

Riding without a bit is much different than riding a horse at liberty—though both can be considered “bitless.”

“Riding without a bit can still involve pressure and control on the horse’s face with a variety of tack, such as halters, side pulls, or bosals, just to name a few,” Gingerich adds. “In contrast, riding at liberty without any physical restraints on the horse’s face gives the horse choice in whether to connect and engage with the activity.”</

Working up to riding a horse at liberty takes time, and should usually be done with tack to start, according to Gingerich.

“It can take months and even years of consistent training with tack, before transitioning to riding completely tackless at a high level,” Gingerich says. “If riders don’t put the time into laying a solid foundation of liberty work before taking the tack off, there can be potentially dangerous consequences. If your horse doesn’t understand how you’re trying to communicate with him and how to use his body without relying on tack, taking the tack off will only confuse him, and can lead to dangerous accidents for both horse and rider.”

However, Gingerich did start his 3-year-old filly without tack.

Vaquero-style training starts with a hackamore before introducing the two rein (a bosal under a bitted bridle) and then the spade-bit bridle alone. Many cow horse competitors today start horses in a snaffle bit as the initial lesson tool.

World Champion working cow horse trainer Matt Koch is a master of riding in a hackamore but considers it part of a full training progression. He trusts his horses to respond to his cues well when riding without a bit.

“I ride a lot of horses in hackamores,” he says. “But for the general public—jeopardizing their well-being for it—that doesn’t make sense in my mind. If their horse gets scared, they don’t have a chance to stop him. It’s not worth the gamble of them getting hurt.”

Koch says it’s the rider’s skill and not the tack that affects the horse.

“The bits don’t hurt them,” he continues. “I can put just as much discipline in that hackamore as I can in a snaffle. You have to have your basic foundation put in. It’s clearer to [the horse] in a snaffle because you can be more direct. With a hackamore, you have to wait it out. If [the horse] decides he wants to run off in a hackamore, he can darn sure run off.”

Bit maker Dale Myler says he’s heard more about the bitless movement within the last 10 years as more and more riders want to find what feels best for their horses.

Myler says a horse will tell you if he’s comfortable in the mouth by the way he carries his head or if he opens his mouth. Myler warns riders not to accept a bit just because it came with the horse or because your trainer always uses a certain type.

“Most problems with bitting a horse are caused by people not listening to and observing the horse,” says Myler. “Instead, we listen to other people, and no human knows how a horse feels in a certain bit. If the horse doesn’t like it, the bit will cause the horse to become evasive to the rider’s hands, much like a human putting their shoes on the wrong feet and trying to work all day. Pretty quickly, you can only think about how wrong the shoes are and nothing else. It’s the same with the horse. They lose a lot of focus if they are only looking for a release of bit pressure.”

Myler also cautions that it’s difficult to achieve precise shoulder control without the use of the bit.

“Nothing is written in stone; however, you won’t have precise shoulder control without a bit, and if you can’t control the shoulders, you can’t, as a rule, get a really precise movement.”

Is there such a thing as too much metal? Myler thinks so.

“In my opinion, there should never be more than one bit in a horse’s mouth at a time,” he says. “There is never any need for it. We are not making warhorses anymore.”

Whatever type of bitted or bitless riding you end up doing, make your decision based on what fits your style and makes your horse the most comfortable.

This article about riding bitless appeared in the September 2020 issue of Horse Illustrated magazine. Click here to subscribe! 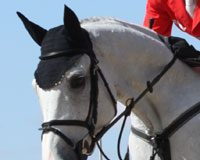