A brilliant moon cast light on the flat plains of the Okavango Delta. All the while a chorus of crickets, bats, frogs, and birds—punctuated by the occasional low honk of hippo laughter—performed with gusto. I was sleeping soundly. But soon I awoke to rustling leaves, breaking branches, and the scratching of leathery legs. African elephants were nearby.

I pulled off my sleep mask in time to see a large gray elephantine rump and swishing tail disappear through the cluster of trees surrounding my tented chalet. I gasped, delighted to have such a close but safe encounter with Africa’s graceful giants.

Three elephants milled around my tent—feeding and enjoying the quiet of camp at night. One shuffled up to the termite mound adjacent to my deck. It made the perfect size pillow for the pachyderm to lean against for a bit of shut-eye. I fell asleep, hypnotized by his slow, rhythmic exhalations. 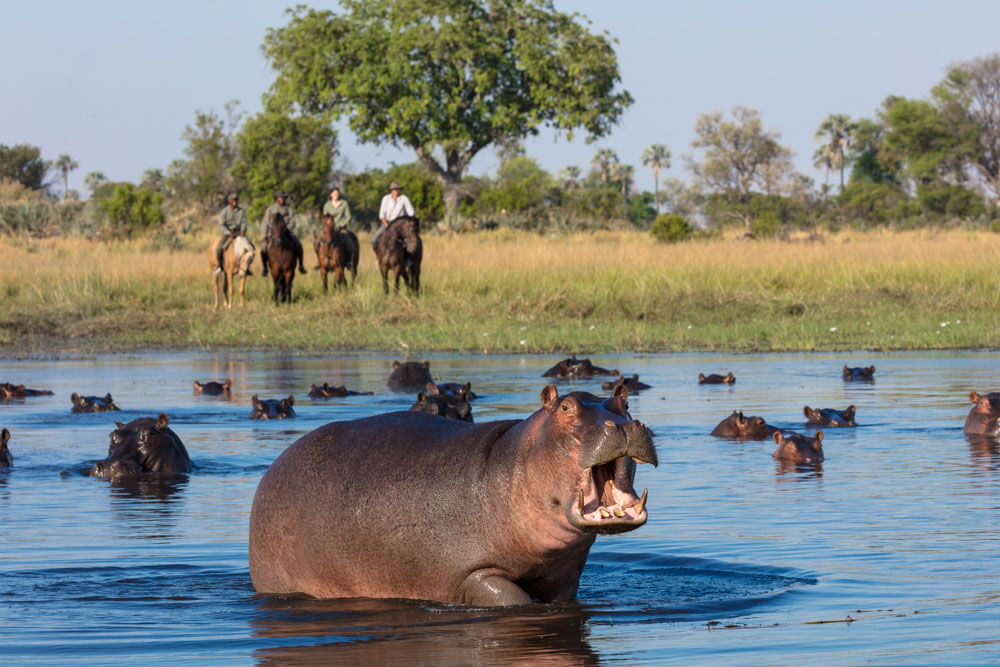 Thus began my time at Macatoo, an unpretentious yet luxurious camp situated on 500,000 acres of pristine and protected land in the southwest corner of Botswana’s Okavango Delta, the world’s largest flood plain.

The delta, known as the Jewel of the Kalahari, is an unparalleled safari destination because of its remoteness, exclusive game viewing, and of course, the yearly influx of water from rivers that creates a freshwater oasis. It supports a huge array of plants and wildlife, including some of the world’s most endangered species of large mammals: the cheetah, white and black rhinoceros, African wild dog, and lion.

Riding Through the Scrub

My first ride at Macatoo was in the late afternoon. I approached the barn with three other guests, all repeat visitors who had logged nearly 30 visits between them.

My mount was a kind local pony, a 15-hand bay who knew the drill. We set out to the east through pungent sage scrub. A male kudu stepped on to the game path in front of us, his elegant spiraling horns supported by bulging muscles on the underside of his neck. His nose, slicked with moisture, tilted upward, trying to catch our scent.

Like all the guides I rode with, the lead guide Bernie was extremely knowledgeable about the bush and excellent at spotting game. Bernie explained that the thin white stripes running down each side of the kudu are called disruptive markings. They keep the secretive antelope camouflaged and confuse predators. Each kudu’s markings are unique, like human fingerprints. As we talked and snapped photos, our mounts munched happily on the abundant grass around us.

In the open, the land stretched to the eye’s limit, complemented by equally expansive sky. The underbellies of the clouds glowed highlighter pink and orange, while the rest of the sky was a palette of blues.

There was nothing in sight except the unbounded landscape and a smattering of animals—true wilderness. It was a thought I’d have many more times during my eight-day stay. I would go on to spend a total of 40 hours in the saddle, spotting a handful of bush planes headed to various camps, but no cars, no people, no gates, and no fences.

The next morning, we rode through a stand of tall African ebony trees defined by crackled bark and hunter-green canopies spreading overhead. Sunlight filtered through the oblong leaves, casting speckled golden light on the forest floor.

The horses picked their way neatly along a game path lined with soft sand. A journey of giraffes nibbled on choice leaves. Two juveniles turned to face us, jaws cranking in circular motion as ox-pecker birds scaled their bodies, removing lice and ticks from their hair.

As the morning warmed up, we rode faster. We cantered and galloped in the open plains, and on some occasions fanned out and ran abreast with game like zebra and giraffe.

The horses’ hoofbeats were indistinguishable from the wild animals running nearby. The wind whipped around me and my heart pounded with exhilaration. When we stopped, I caught my breath and gave the guide a wide smile. It was exactly the rush I was hoping to experience on an African horseback safari.

At one point, the group was cantering along a game path when we crossed a trio of grumpy buffalo, one of Africa’s Big Five. We quickly pulled up.

They stopped grazing and lifted their horn-crowned heads warily. A moment passed. One started to run directly toward us. Our guide, Thabo, instructed us to retreat.

The backup guide spun his horse around easily and led me and the two other guests away at a clipped trot. Thabo spoke to the buffaloes loudly, trying to call off the charge. They were undeterred.

I looked back as Thabo deftly moved his horse out of their path. We watched them disappear into a thicket from a safe distance. Lesson learned: Never trust a buffalo, particularly solitary old bulls relegated to living out their days.

I’ve been on dozens of vehicle-bound safaris, and I’ve also been on many walking safaris. (I trained as a vehicle and walking safari guide in South Africa some years back.) But equestrians have some unique advantages. Without the roar of a diesel engine characteristic of safari vehicles, riders catch the delicate sounds and observe the rhythms of life in the bush, such as animals’ social interactions, sparring techniques, mating habits, and athletic jumps and speed.

On horseback, you don’t need to stick to roads or paths; you can go wherever your horse can take you (just steer clear of lions). Even if there are no animals about, you’re still riding a horse in the African bush, one of the planet’s last frontiers.

During an afternoon ride, our group came across a breeding herd of elephants comprised of females of all ages and young males. Once the guides spotted them far in the distance, they noted the wind direction and chose a diagonal approach so that our scent wouldn’t carry toward them.

The herd of 17 crossed the plain in line; one matriarch led the way, while another wizened female brought up the rear. The elephants bore a dark water line, showing where they had dipped into a pool for a drink and a splash. The smallest ones, who our guide estimated to be about 3 or 4 months old, were completely wet, having apparently gone snorkeling. 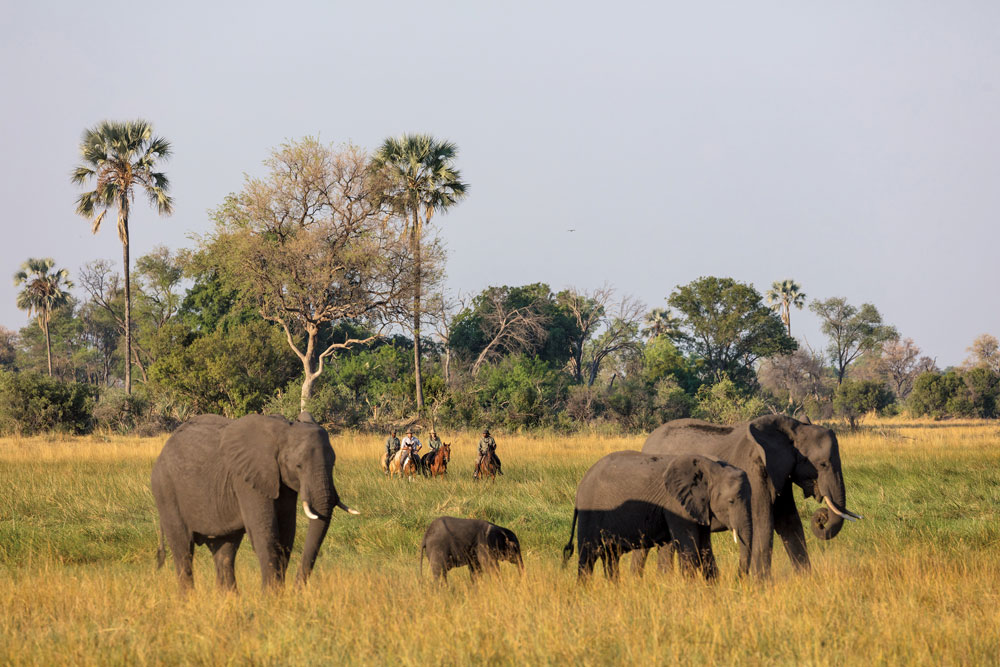 A brilliant sunset graced the sky as we finished our ride. The air chilled as the sun dipped lower. Grooms hopped on our horses and took them back to the stable while we mingled with the camp’s hospitable owner over sundowners and snacks on the viewing deck.

Another favorite moment was a visit to one of the region’s few baobab trees. Baobabs once populated the area but were annihilated by elephants eager to chew on their fibrous trunks.

After about two hours on our morning ride, we approached the meadow. The African sun had come out, bright and warm. Insects jumped from grass stems, African monarch butterflies danced with erratic elegance, and antelope and zebra grazed contentedly.

The grand tree stood alone in a meadow of bunched green and yellow grass like an ancient shrine. In fact, it was about 2,000 years old. It was hard to look away from the smooth-barked giant.

Alone in the meadow, I wondered what this tree had seen in its lifetime. The specimen was testament to the persistence of a highly adapted species, and with luck, it might live another 2,000 years.

Throughout the week, delights of the bush continued to surprise me. It was a world beyond the office, the noise and chaos of traffic, cell phone alerts, and gym sessions that define my normal week in San Francisco.

I relished deep conversations with strangers who became friends. We bonded over hours in the saddle together, depending on one another to act sensibly when dangerous situations arose.

At dinner, we toasted each other and our collective fortune of being able to enjoy vacations like this while gazing at the star-studded sky. We all felt free to be our boldest and silliest selves, free to leave behind the demands of our jobs.

It was a chance to explore and learn about nature and conservation, and to have surprisingly substantive and revealing conversations. Not unexpectedly, the combination of riding and the bush provided a place to relax, reflect, and enjoy in a setting of adventure and release.

My time at Macatoo showed me that in this haven for game and sanctuary for the soul, peace of mind and body is still very much possible. 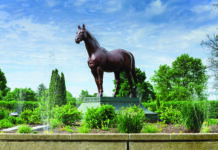 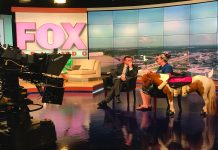