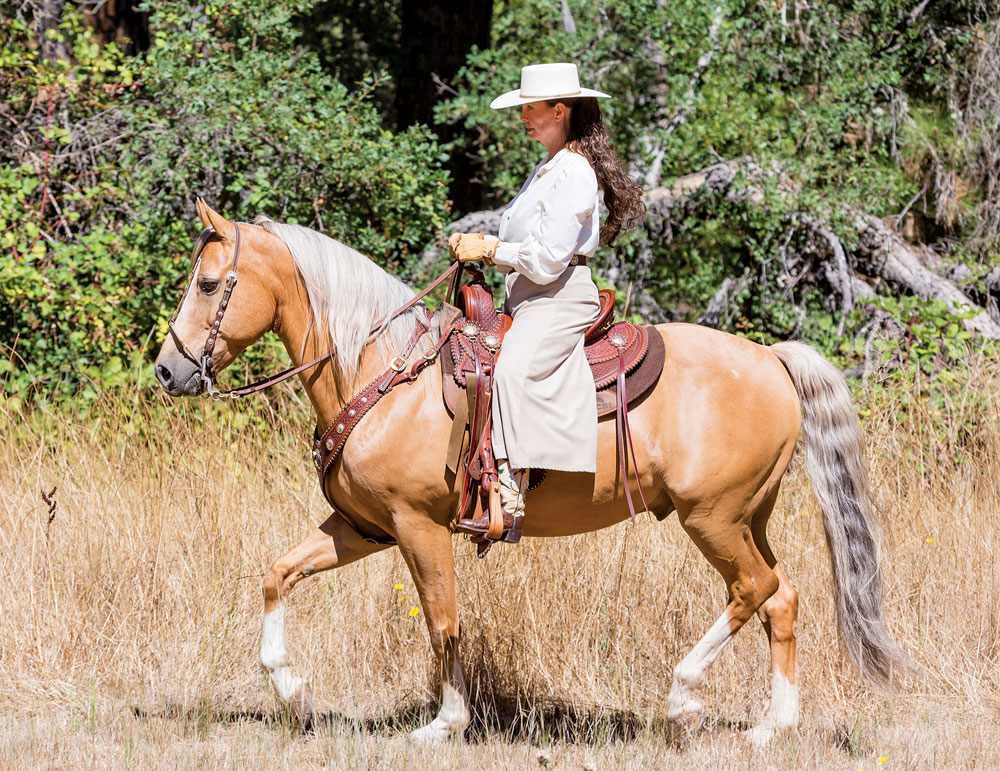 The walk, trot, and canter (or gallop) are the natural gaits of the horse. The jog and lope are cultivated gaits that were born on the ranches of the West. Instead of a fast ground-covering long trot, the shorter jog is better for slipping from pen to pen without spooking the cattle. The rocking-chair lope that is comfortable to sit all day is the shortened form of the rougher and faster canter. When done correctly, working with the gaits and three “frames,” which we’ll tell you about, can help build balance and harmony in the horse. Read on to learn morea about cowboy dressage techniques for training correct gaits.

We cannot speak of gaits without first speaking of forward. Forward is that quality within the horse that is always asking to go. A forward horse is one that is ready and willing to get something done. If you are consistently begging the horse to go forward, you are already behind the game. While the desire to move forward will vary by horse, it is our job as riders to always encourage the forward because the loss of it affects everything you try to do. 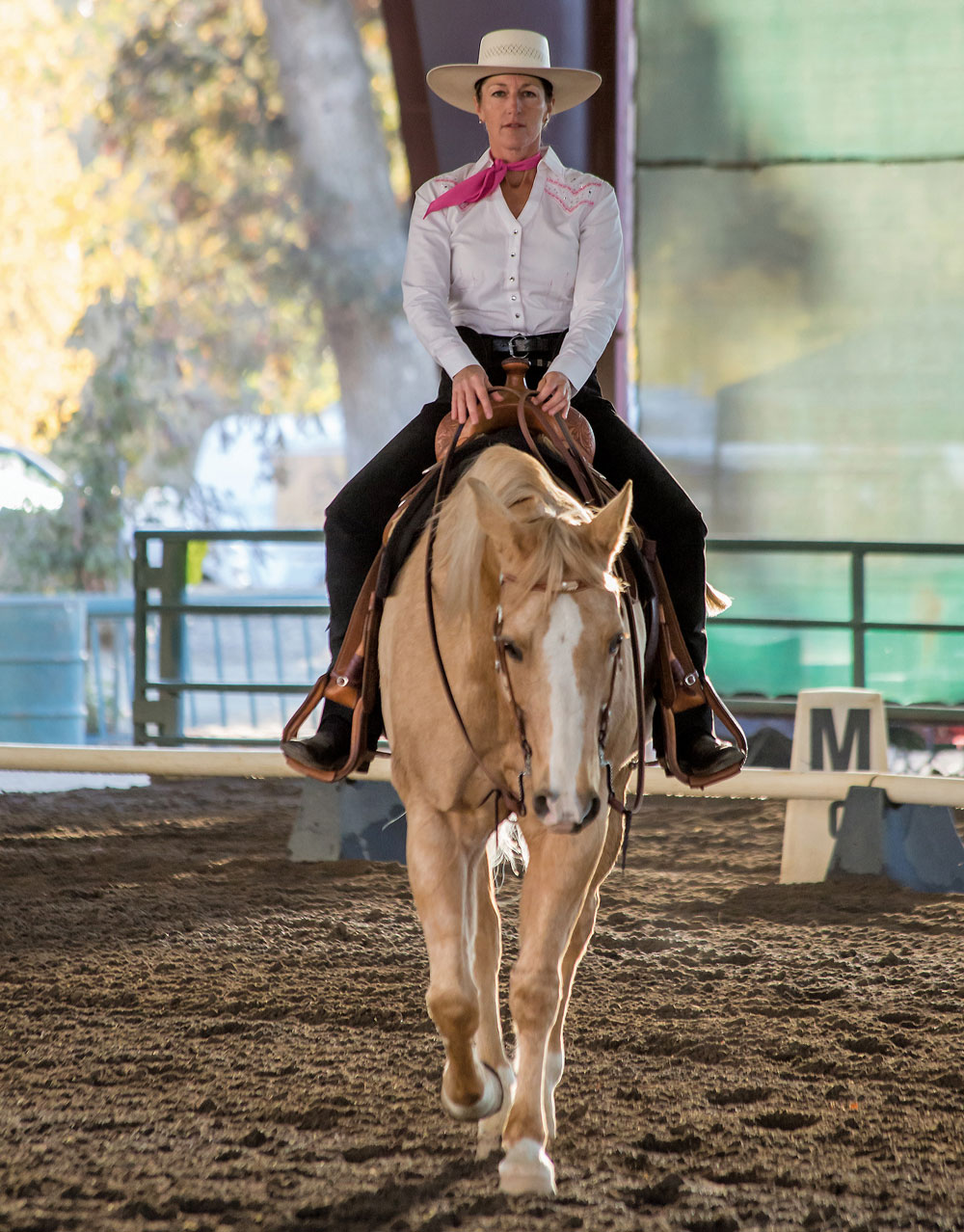 The most important of all the gaits—and the gait most often neglected in training—is the walk. The balanced walk is a four-beat gait requiring even distribution of the horse’s weight between all four feet as he carries his weight forward. The footfall pattern of the walk is left hind, left front, right hind, right front. A single stride of the walk includes movement of all four feet, beginning with the left hind and ending with the right front.

Engagement and Disengagement: Understanding the walk by its essential parts of the stride can help you learn to identify, and thereby feel, where the feet are at any given time during the motion of the stride. The stride is composed of weight-bearing and non-weight-bearing (flight) phases, which at the walk happen independently for each foot. Both the horse’s head and hip shift in balance with the weight-carrying phase of the hind feet.

Disengagement is defined as the portion of the gait when the horse’s leg is behind the hip as it enters the flight portion of the stride. As the horse shifts the weight of the hindquarters to the forehand, the head goes down. Therefore, as the left hind leg pushes forward, the head is up until the left hind is at the end of its weight-bearing phase, and then in its disengagement phase, shifts the weight to the horse’s left foreleg, causing the head to go down.

The jog should be very comfortable—for both the horse and the rider. While retaining the propulsion of the classical dressage trot, it lacks suspension. By discouraging suspension but retaining forward momentum, the concussion to both horse and rider is removed from this two-beat gait.

The lope is the three-beat rocking-horse gait for which the western horse is so widely known. It is soft in its cadence and also without suspension. The lope may be either right- or left-“leaded” with the lead of the gait being assigned to the front limb moving without a paired back leg.

It is often argued that the lope without suspension must be a four-beat gait, but it is the impact of the feet striking the ground that is responsible for the beats of the gait. A true three-beat western lope has three distinct beats as the diagonal pair is impacting the ground at the same time as a single beat.

The suspension phase of the gait that occurs at faster speeds occurs between the leading front foot at the completion of the stride and the initiating hind foot at the beginning of the next stride. In a three-beat lope, the hind foot is striking the ground as the leading front foot is leaving the ground so that there is no suspension in the stride.

The four-beat lope that is often found in an incorrectly moving western horse is caused by slowing the feet down to the point that the horse splits the diagonal pair of the front and hind limbs moving together. This will appear to create a horse that is trotting in the hind end and loping in the front end. Often called the “trot-a-lope,” this is an undesirable gait, showing limited propulsion.

In each of the gaits there are three frames that we talk about in Cowboy Dressage: the short (collected) frame, the working (medium) frame, and the free (long) frame.

We use the short frame primarily as a frame of preparation and transition, though many advanced dressage maneuvers are performed in it. The short frame is the compression frame that tells the horse to shift the weight to the hindquarters; it is an advanced frame of readiness.

In the working frame, the horse carries his head and neck in a position to encourage shifting of the center of gravity backward toward the hindquarters with softening of the poll, relaxation of the jaw, and elevation of the withers from the shoulder. The working frame is developed in the horse by encouraging the horse to relax into light contact through the reins while engagement of the hindquarters carries the propulsion forward into the gait. It is a frame of readiness for the execution of the next step. In the working frame, you should be intimately connected to the feet of the horse through the aids.

The free gaits are not a quickening of the gaits but a lengthening. The horse will lengthen the topline as he is reaching down and forward to stretch. The stride will lengthen so that it takes fewer steps to cover the same amount of ground as in the working or short frame. Schooling the horse to relax in the free gait is as important as teaching him to soften in the working gait.

With the lowering of the horse’s head and neck, the center of gravity moves forward from the rib cage to the front half of the horse. However, even with the change in the center of gravity, it is important not to “dump” the horse onto the forehand. To properly engage the horse in the free gaits, the rider must continue to ride the horse forward so that propulsion through the hindquarters will keep the horse engaged and driving from behind, helping to lift his back. When properly performed, the free gait should feel like you might imagine it would feel to sit at the top of a rainbow.

While ridden on a long rein, there is still light soft contact through the bit to the rider. The reins are long enough and free of undue pressure so as to allow the horse to reach forward and open the throatlatch, but not so loose they are flapping in the wind. It is so important to completely understand the difference between the free frame and just riding on a long, loose rein. The free frame is an engaged frame in all of the gaits. While it is a frame of relaxation for the horse and can be used as a “reset” and reward following either mental or physical fatigue, it is not a slouching or hollowing gait—especially at walk. Recognizing the difference between a hollow, relaxed frame and an engaged, free frame will enable you to cultivate athletic strength and a long, strong, and elastic topline in the horse. 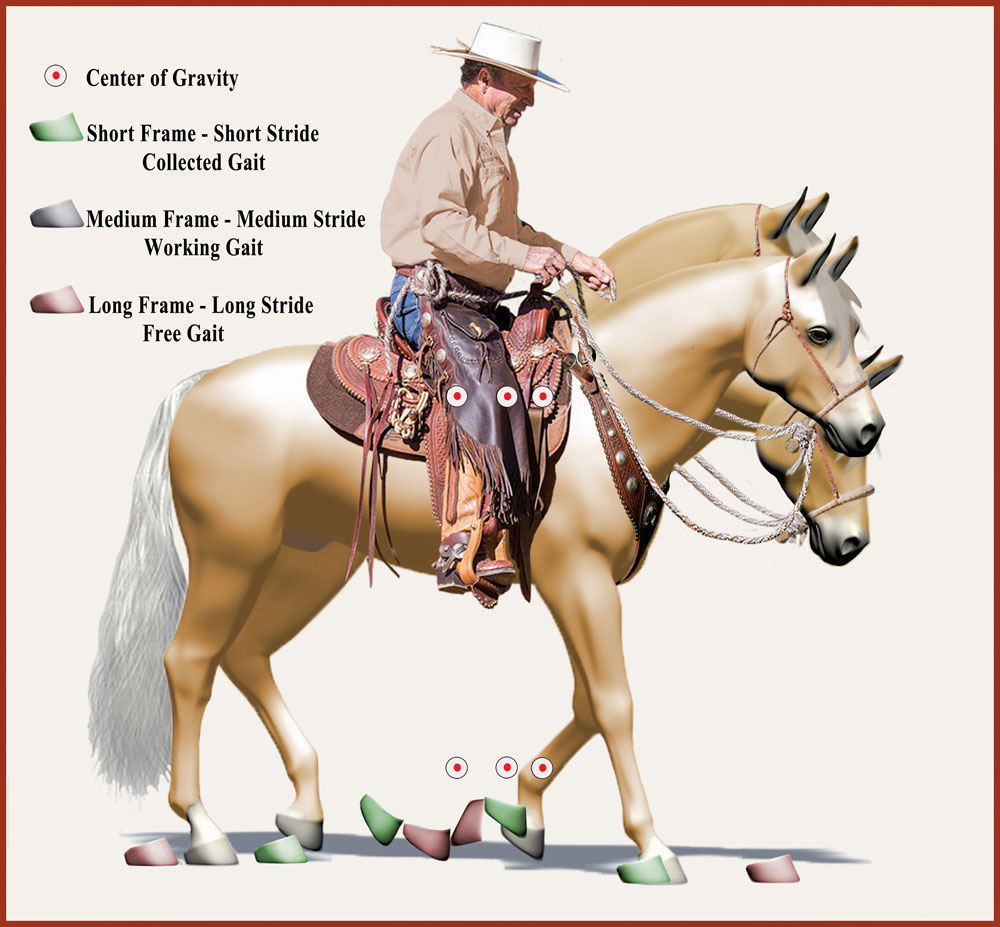 The three frames in Cowboy Dressage are the short frame (collected frame), medium frame (working frame), and long frame (free frame). Notice not only the shortened stride length but also the horse’s head position in each of the frames. With each shortening of the frame from the lengthened frame, the center of gravity shifts farther back toward the hindquarters. The only thing missing from this illustration is the adjustment in the rider’s position: The rider’s hands would mirror the horse’s head position and the rider’s seat would rock backward slightly as the center of gravity is shifted toward the hindquarters.

Adapted from the book Dressage the Cowboy Way and reprinted with permission from Trafalgar Square Books (www.horseandriderbooks.com).