Whether for competition or pleasure, often our horse adventures take us far from home for several days. Hotels can really add up, and horse trailer living quarters are expensive. Inventive equestrians have solved this problem by converting their horse trailer tack rooms into camping spaces.

There are infinite possibilities when it comes to creating a sleeping area. Here are some modified trailers to help inspire your own creativity.

Vonda Davison says she did a lot of researching and planning before converting her 2013 Featherlite Perfect Fit two-horse straight-load.

“It’s important to know the best insulation to use and also what type of screws you’ll need when drilling into aluminum or steel,” she says. “For instance, you do not use steel screws when screwing into aluminum.”

Since her horse trailer had saddle racks under the feeding areas, she moved one to the other side to make room for a bed in her living quarters. She added insulation, furred it out, and finished with paneling and trim. “Furring out” refers to expanding a wall’s construction, either by depth or width, usually by using metal or wood to make a level surface. Since most trailers have framing on the inside so you don’t have a smooth wall, the “furring” would make the wall flush with the framing so it’s smooth, like the wall of a house.

She made a cabinet to fit the front of the trailer and installed a USB-charged faucet with a 5-gallon water container and a sink that drains into a bucket. Her bed is made of two-by-fours with foam cushioning. For lighting, she uses a battery-charged lamp.

“The hardest part was drilling the furring strips to the aluminum ribs,” she says. “I had to pre-drill all the holes.”

Lisa Parkhurst had 2 feet of extra length added to the dressing room of her 2011 Double D Safetack bumper pull when she had it built because she knew she wanted to fit a bed in it.

“I knew I was going to camp in the trailer, so I wanted the dressing room big enough for a cot,” she says.

She also had them add a walk-through door to connect the stalls to the sleeping area, a vent with a 12-volt fan, and a 12-volt battery wired to trickle charge from her truck when towing.

Finally, she had a 25-gallon water tank and an awning installed in her DIY horse trailer living quarters. Even then, she ended up making some changes.

“It was very cramped,” she says. “Eventually, I put a bed in the front part of the dressing room over the spare tire and battery, high enough that I could take advantage of the windows in the nose of my trailer.”

Due to weight, she couldn’t add cabinets, but found another way to have storage.

“My trailer is made from Z composite, which means it’s not as heavy as a steel trailer, but it is magnetic,” Parkhurst says. “I took full advantage of that and put in magnetic baskets on the wall for storage. I glued a shoe holder to the pass-through door, and then under the bed, I have two aluminum wire shelves.”

Under the bed, she ran a heavy-duty extension cord through the floor, so she can plug in if hook-ups are available. Parkhurst used foam puzzle mats for her flooring, because they were easy to install herself.

For insulation, she used leftover bubble insulation from her barn.

“I covered the part around the bed with soundproofing foam and fabric,” she says. “I knew I would be bumping into it as I slept, and it really does cut down on noise from other campers. On the rest, I used a peel-and-stick wallpaper, and either covered the wall directly [over the insulation] or covered foam craft boards cut to fit.

“New in the past year was adding a 100-watt solar panel and solar generator,” she adds. “This has allowed me to use a microwave, coffee pot, and 12-volt cooler, and really covers all of my power needs except for electric heat and air conditioning.”

Joanie Carter purchased a 1997 Midsouth two-horse trailer with enough room for a bed in the dressing room, knowing she would convert to add some living quarters. But just putting a bed in proved to be more work than she thought.

“There have been some ups and some downs,” she says. “I started with a fold-out foam sofa as my bed on the floor. That was too low. I used a coffee table to elevate the bed. That was too hard and not long enough to stretch out. I finally realized that I could remove the saddle rack under the manger and place my bed along the side. Now I can fully stretch out by sticking my feet under the manger.

“I then added shelves to store the three-in-one breakfast center, microwave and utensils,” she continues. “I added a small cabinet to house the lights and USB fans.”

She also added a vent and, with the help of her son, a window for cross-ventilation. She uses a solar generator and two 100-watt solar panels for power.

There was no extra tack space, so she made a rack out of PVC pipe and put it in the rear of her trailer, taking up one of the two stalls. She also put the spare tire, chairs and table in this area, plus a solid divider. On the trailer door, she added a caddy to hold grooming supplies.

Kelly Dickson had lots of space for her conversion, since her 2004 Featherlite two-horse slant load is the same size as a three-horse trailer, but instead of a third stall, she has an enlarged dressing room and a rear tack. Because of this, she was able to create a mini-living quarters area that looks just like a small RV.

She had a pass-through door installed, then had the entire area insulated with closed-cell rigid foam and sealed with HVAC tape. Furring strips were used to prevent condensation.

She had 30-amp electric installed for a camping hookup, interior lights and electrical outlets. She has a bed at the nose of the trailer with storage above and below it. She has a closet, microwave, counter, sink, collapsible table, electric heater and mini fridge.

“The most difficult decision in my conversion was where to anchor the spare tire,” she says. She ended up bolting it to the wall of the rear tack, which she says makes it easily accessible.

New Life in an Older Trailer

Bridget Hayes converted a 1984 WW two-horse straight-load trailer into an adorable camping set up. She cut an opening at each manger and installed cabinet doors. She used part of an old desk to make a table for her microwave.

A portable air conditioner is vented out into the horse compartment through a hole in the back wall with a drain tube in the floor. She built cabinets along the front with a bar sink and a fridge.

Hayes uses a cot for a bed, with her portable toilet underneath. She plans on replacing the cot with a folding shelf so she can lift up her bed and store items underneath.

“My biggest issue was getting rid of the rust and maintaining the metal,” she says.

Since her trailer didn’t have a rear tack, she uses a portable saddle rack on wheels that sits in the living space while traveling. The rack is then moved to the horse compartment when camping.

With endless ideas, you are sure to find something that will work in your trailer, regardless of its age or size.

This article on how to create DIY living quarters in your horse trailer appeared in the June 2020 issue of Horse Illustrated magazine. Click here to subscribe! 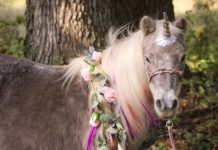 Clicks and Flicks: How to Take Great Photos and Videos at...