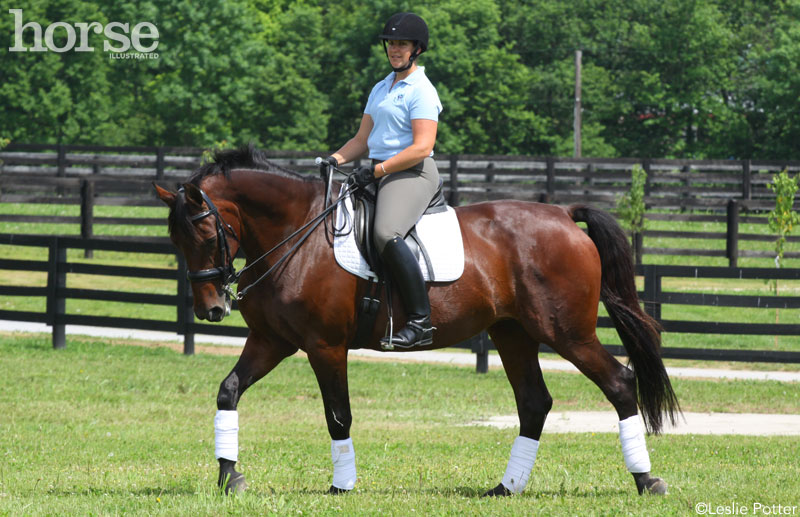 Picture this: You and your horse have taken a break from working on dressage in the arena and have gone on a long trail ride. Your horse has been alert and forward, but loose and relaxed throughout the ride. Trotting up a hill on the home stretch, your horse goes into high gear. You feel the thrust of his hind legs well under his body, and his rounded topline collects itself like a coiled spring. He becomes light in your hands yet his movement is powerfully forward, lapping up the land between you and the barn.Exhilarated, you realize this is dressage. This is why we do dressage, you think. So we can have moments like this. Read on to learn more about dressage outside the arena.

Dressage Outside Arena: Any Time, Anywhere

“Dressage isn’t an isolated thing we do with our horses but a way of going,” says Rohlf. “It goes with you everywhere. It’s only because you’re not thinking in those terms that you don’t think you’re doing dressage unless you’re in an arena.”

She practices dressage on trails and in open fields to get more power, relaxation, and forward energy with her horses. She finds the inspiring locations give more power to low-energy horses, and that being outside relaxes horses that get tense inside the arena.

“The arena is the box where we test and demonstrate our dressage,” says Rohlf. “It’s also a tool for fine-tuning balance, accuracy, and precision. But dressage is not about the arena; it’s about developing the ‘happy athlete’ the FEI rule book describes: a horse that is happy, confident, attentive, keen, loose, supple, flexible and athletic.”

By exploring more inspiring locations for dressage training, she feels we can increase our chances of success in developing those qualities in our horses.

For example, open spaces give horses a sense of freedom of movement. Riding from tree to tree or other landmark is a great way to practice straightness. Hills develop a horse’s balance. And trails motivate the horse to go forward.

The German and British dressage teams, the gold and silver medal winners at the 2016 Rio Olympics, regularly ride their horses cross-country, points out German-trained dressage legend Walter Zettl. Carl Hester of the British team advocates riding up hills to improve wind fitness, and throwing in some jumps to keep your horse interested in his work.

“A jump shouldn’t be thought of as different from dressage,” says Zettl. “It’s just a longer and higher canter stride.”

In his book, My Horses, My Teachers, Alois Podhajsky, a former director of the Spanish Riding School, relates the story of a horse named Nero who did not perform well when he came to Podhajsky because of an extreme lack of impulsion.

Podhajsky rode the horse in nearby Prater Park, where he could take “long, straight lines,” since circles and turns dampened his impulsion. Gradually, Podhajsky introduced short sessions in the arena between rides in the park. Nero enjoyed his work outside, and his impulsion improved dramatically.

After eight months, he placed second in an international competition, and went on to win Grand Prix de Dressage in Budapest against the best talent in Europe. This example may shed light on the potential of many dressage horses today.

“Most dressage horses are getting ring-sour practicing tests all the time,” says Zettl. “We are drilling horses too much, which makes them into machines. The work should be gymnastic and fun for the horse.”

Doing circles and serpentines in a hilly field can be extremely valuable to dressage, says Rohlf.

“It will make the horse incredibly balanced and much more powerful. If you keep the same symmetry and tempo as in the arena, the horse will have to sit and carry himself on the downhills and push more from behind on the uphills. It’s a very conscious thing I do with all levels of horses. I let the hill do the job of getting the horse’s muscles working.”

Trails lend themselves to lateral work, Rohlf finds. If a trail is wide enough and straight enough, you can practice leg-yielding from one side to the other, haunches-in left and right, and shoulder-in left and right—all without having to turn around every 40 or 60 meters.

“The biggest problem I see happening in lateral work is loss of energy,” she says. “A trail gives the horse forward energy, especially on the way home.”

Learning tempi flying lead changes can be easier in an open area, too.

“In the arena you have only so many chances before you reach the corner,” Rohlf says. “But you can canter down the trail and keep on changing leads. It’s really good for horses’ minds because they don’t anticipate what’s coming after the change.”

Canter-walk-canter transitions work better on the trail, too, because of the horse’s naturally forward energy.

Lastly, you can use a trail to practice counting strides between transitions, such as 10 steps walk, 10 steps trot, et cetera.

“You don’t necessarily want to plunge into deep water,” says Rohlf. “But if you keep making the box you ride in smaller and smaller, pretty soon you’ll only feel safe at one end of the arena.”

Here are some strategies Rohlf recommends for working up to feeling comfortable riding in the open.

Rohlf started her young PRE horse, Natilla, in the arena. When it came time to try her on the trail, Rohlf questioned whether she was ready. The mare was somewhat anxious, had a habit of looking outside the arena, and could get quite strong.

But to Rohlf’s surprise, Natilla became very relaxed—apparently less claustrophobic—when ridden in a field. And this newfound relaxation carried back into the arena, where she is now totally comfortable.

Corisco, a Lusitano started in Brazil, was another case. After being imported to the U.S., he was kept in a stall in a dressage barn with little turnout, and things did not go well.

“He came to us because he was explosive and dangerous,” says Rohlf. “He was on three calming meds, and they told us we’d have to longe him multiple times per day.”

Karen and an assistant, Shawna, did lots of relaxation exercises with Corisco on a long rope and in the saddle—outside the arena. Within two weeks, Shawna was riding him in a halter, and he became the happy dream horse of a dressage student in Kentucky.

“Something magical happens when you retrain a horse to be OK with being ridden in the open or on the trail,” says Rohlf. “There’s an extra inner peace that they feel.”

That inner peace translates to relaxation and suppleness—essential building blocks on the dressage scale.

Besides keeping his mind fresh and his outlook enthusiastic, being ridden outside the arena may be just what your horse needs to improve his relaxation, impulsion, and overall dressage performance.

This article about practicing dressage outside the arena originally appeared in the August 2018 issue of Horse Illustrated magazine. Click here to subscribe!