We have all seen a rider kicking her horse, red in the face from effort, getting nowhere, and thought to ourselves it looked like a whole lot of work. Maybe some of you have even been that rider, wondering how to light a fire under your horse.


While some horses are inherently quieter than others, most lazy ones are made, not born. Usually, they have developed an aversion to exercise because the training program may have exceeded their capabilities at one point. As an equine fitness specialist, I witness this frequently. Regardless of the cause—and being sure to rule out health contributors—the solution is to create a training routine that eliminates lazy efforts. Using both broad tactics and specific exercises, it is possible to motivate a horse that otherwise seems to require a lot of pushing and shoving.

First, let’s agree on what we consider “lazy.” A calm mount that might need a little waking up at the beginning of a ride is not what I consider lazy. On the other hand, I consider a lazy horse one that requires constant use of your legs or whip to keep moving, or one that gives you the feeling that you are working harder than the horse.

A fit, strong horse with adequate oxygen and blood pumping to his gymnastic muscles will very rarely exhibit exercise resistance or be lazy. Laziness typically crops up when he has experienced an inconsistent training schedule—one without purpose—or one that has not incrementally increased the workload in a consistent weekly fashion, which then causes him to hold back in his work effort.

Not all exercises work the same for all horses. Even proven successful exercises might not be effective for certain horses depending on aerobic make-up, muscle fiber type, temperament, and so on. In terms of motivating a lazy horse, you will need to play around with finding exercises that condition his overall strength in addition to sparking his energy a bit. Find exercises that work for your horse and commit to them.

This extends to all handling of the horse, especially leading him on the ground. Aim to keep him bright and attentive and walking briskly any time you lead him. Remember: any time you are working with a lazy horse is a chance to rewire his nervous system to operate differently!

Most horses become dull or lazy early on from too much time spent in one speed or gait, or perhaps relaxation was over-emphasized in the breaking-in period without a balance of more energetic movement. As a general rule, even for competition horses, I never school arena-specific skills more than three times per week.

To keep a horse fresh and willing, it is imperative that riders balance out their riding sessions with alternative schooling methods. Most successful is the use of what the Germans call hangbahn, which is essentially dressage schooling on sloped outdoor terrain. I have repeatedly seen this work wonders for horses that are otherwise uninterested to perform in the arena.

The best option is to find a gently sloped area under a few large trees that you can circle around. Nearly any area will work so long as it is clear of rocks and holes; it does not need to be large. A couple of surface changes (soft ground to hard ground) are also ideal. These create adaptations in the horse’s proprioception—the sensory awareness of the position of his body. Use this outdoor area to ride transitions, figure-eight around trees, half-halt, and ride leg-yielding exercises.

When you commit to this once a week, you will be surprised to find your horse much more responsive the next time you ride him in the arena. Riding on this outdoor surface re-wires his nervous system in a positive way, both mentally and physically.

Generally, these kinds of horses respond well to inertial drills: intervals involving speed changes. These routines have a predictable work interval of higher intensity followed by a brief let-up.

An example would be sprint drills, either galloping or fast trotting between cones spaced at roughly 50 feet apart followed by slow jog for about 50 feet and then another sprint. Continuing on like this, the horse begins to anticipate the sprint, which revs him up a little. Additionally, these short bursts of higher intensity deliver more blood and oxygen to the prime movement muscles, which develops strength and continued animation in his movement.

If a horse does not perk up during these drills, it can be helpful to add a buddy horse to the routine, having the second horse speed past him during the sprint line and then drop behind him during the rest segment.

If a horse does not perk up during these drills, it can be helpful to add a buddy horse to the routine, having the second horse speed past him during the sprint line and then drop behind him during the rest segment. Try this in all three gaits. You just might be surprised how physically and mentally useful this handy exercise is.

For horses that won’t stay in the canter without constant prodding, I use what I call a canter box. This involves laying two poles on the ground parallel to each other, spaced approximately 10 feet apart (or the length of your horse’s normal canter stride). 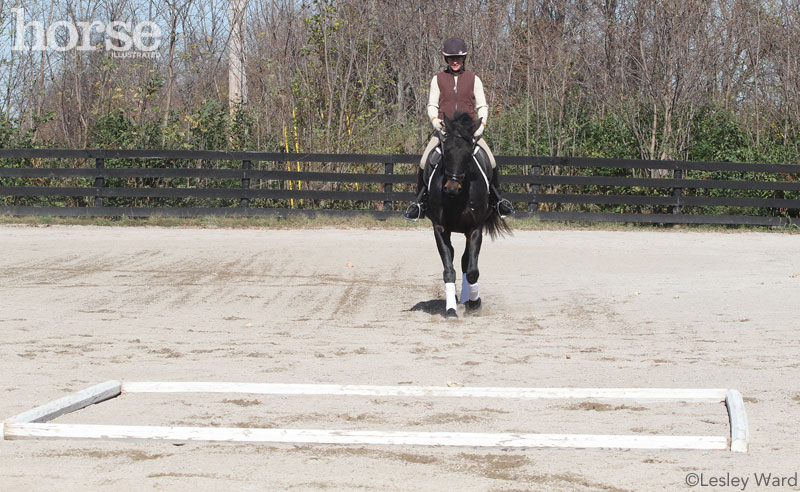 Develop your canter and then approach the poles on a straight line heading straight over the center of the poles. Your horse should canter over the first pole, land tidily with all four feet between the first and second poles, and then calmly carry on over the second pole.

This exercise creates a “draw” that pulls the horse toward the pole pattern, thereby eliminating any need to prod him onward. It also helps organize the canter by putting the horse in a situation where he needs to become more balanced with his stride, which facilitates maintaining the gait for a prolonged period.

Another exercise that works with most lazy horses is to ride varying patterns with poles raised 6 to 8 inches off the ground. Most riders seem to know the value of cavalletti, but too frequently they just set them up in a single row to ride back and forth over them.

A much more beneficial use of raised poles for a lazier horse is to set them up at all kinds of random distances around the arena. This prevents him from plodding mechanically over a row of poles, falling on the forehand by the end of them, or maybe bumping a few along the way. By spacing them out all over your riding area, it keeps the horse more alert and responsive, in addition to getting a little more work out of him every few strides. In fact, for horses that tend to lag along in the trot and canter, I sometimes go through an entire phase of training during which all of our arena time is spent riding over and around these randomly placed raised rails. I find this to be tremendously more effective than climbing onboard and trying to kick and squeeze the lazy horse around the arena.

When schooling a horse that is quieter by nature, it is imperative that every moment brings him out of that state. You must be careful to avoid routines that continue to foster a lackluster effort. Consistency is crucial. If sometimes the horse is allowed to be lazy and then other times you get after him, he will not make permanent changes in his attitude toward work. By consistently addressing how he uses his body and mind, you’ll see results.

Most horses that I see shuffling around the edge of the arena have become this lazy because of restriction in their bodies that has shortened their strides and dulled their nervous system.

Essentially they are plodding around half-asleep without putting any effort in to sensory awareness or movement. They are often not in discomfort, but somewhere they have developed restriction in range of motion for a particular muscle system—shoulders, back, hindquarters—and their nervous system has re-wired. In other words, the horse’s central nervous system only has one signal for telling the body how to move: slowly. Anytime I see a horse dragging his hind feet or scuffing his front toes through the sand, I know this is the problem.

As an example, stiffness in the horse’s longissumus, his long back muscle, tightens his latissimus muscle, which affects how he is able or unable to swing his forelegs freely. It will feel like he ignores you on his back, which on some level is accurate, but the larger issue is that he is not capable of performing much better.

Horses in this category need physical therapies combined with schooling. Until their bodies change, their performance will remain the same. If your vet has ruled out any obvious physical causes of discomfort, an equine massage therapist can show you specific stretches that would be beneficial to your horse. 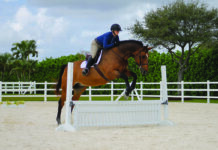