The basics of dressage focus on asking your horse to move forward into contact in a relaxed manner so you can create a connection. In the quest for connection, riders spend countless hours on the 20-meter circle. However, there are other figures and exercises you can use to avoid the boredom of repetitive circles. By doing exercises that require you to think about your horse’s bend and direction, you can improve his movement and find that connection.

Download the diagram above for some exercises you can use to practice in your arena at home.

A figure-eight is two circles that have a tangent straight stride in the middle. As you cross the center of the arena to change direction and ride the second circle, there will be one stride of straightness perpendicular to the centerline where the two circles meet. Start by doing two 20-meter circles. As you and your horse advance, you can try 10-meter circles

A four-loop serpentine in the dressage arena is based on four 15-meter loops. You’ll alternate bend the same way you did in the three-loop serpentine, but your horse will travel straight for a bit longer as you change direction in this exercise as your loops are no longer perfect half-circles. 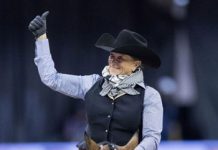