If you’re a competitive dressage rider or eventer, your score ultimately comes down to your performance in the ring. All the practice in the world doesn’t guarantee that you’re getting every possible point out of your test.

Here, Gina Miles, the individual silver medal winner in eventing at the 2008 Beijing Olympics, shares some ways to get more out of your score. 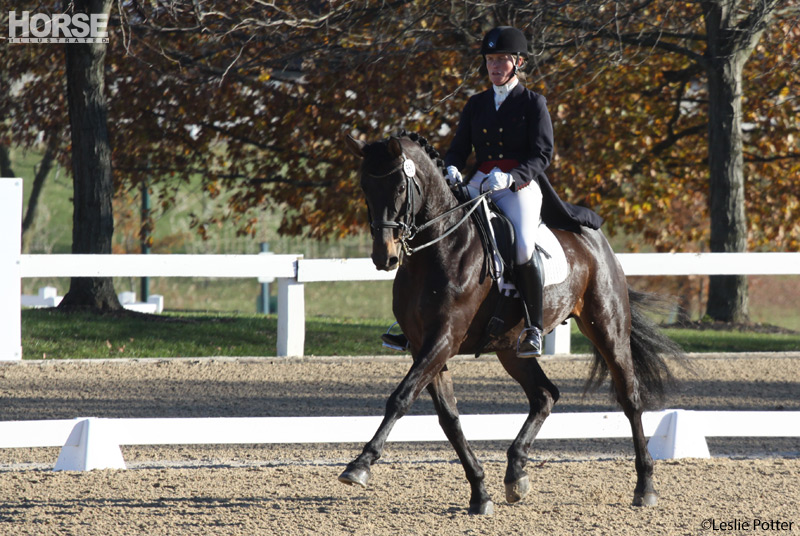 It may sound overly simple, but a dressage test is truly a test of geometry. Judges will score an average mover that makes accurate figures higher than a fancy mover that drifts off the rail and makes egg-shaped circles. Knowing this, you can pick up a lot of points just by being the most accurate rider at the show.

“I think especially at the lower levels, people are unfamiliar with the rings,” says Miles. “They don’t spend enough time thinking about where a 20-meter circle should start and end; or if you’ve got a 15-meter circle, what it means to go out to the quarter line. Get a diagram of the arena that shows the measurements, and using the letters for reference, figure out where you should be crossing the centerline in your circles.”

Miles recommends another handy way to train yourself to ride round circles at home: “I like to put out cones and do a counting exercise,” she says. “If you’re going to do a 20-meter circle in the center of the arena starting at the letter B and get 16 steps from B to E, you should also get 16 steps from E back to B.” An uneven count means one half of the circle is too flat and/or the other half bulges out too far.

Another underused technique is defining the corners from the circles at the ends of the arena. “Often, people don’t make the distinction,” says Miles. “If you’ve got a 20-meter circle at A or C, stay out of the corners. When you’ve completed the circle [after passing A or C], you can go into the corner.” The more advanced a horse, the more he can bend and the deeper he can go into the corner. But if you have a green horse, just go for a subtle difference to show the judge that you understand the difference in geometry.

The shortest distance between two points—in this case A and C—is a straight line, so why is it so hard to ride one? Miles says this is a very common problem. “In your Training Level test, all you have to do is ride straight to get some extra points on your centerline,” she emphasizes. “But a lot of people come up the centerline and drift out, or they overshoot it and then try to leg-yield back.”

When show day finally arrives, your pre-test preparation is everything. Miles says that having an exact plan in mind will go a long way toward helping your performance in the ring.

“Watch the rider in front of you and make sure that as soon as she halts, you’re headed around the outside of the arena,” she says. “Give yourself as much time as possible to familiarize your horse with the arena,” says Miles. She advises having some go-to warm-up exercises that you know will help your horse perform his best. “Do you need to do five trot-walk transitions, or leg-yield a little to the right and then back to the left? I think having a routine also helps people to relax when they get nervous about going in the arena. If you have a plan and continue riding it until the judge rings the bell, then it can help you focus on what you need to do and not be in a panic.”

Miles also emphasizes that while it’s important to know you have 45 seconds to enter the arena once the bell has been rung, there’s no need to let that frazzle you. “Practice having somebody ring a bell and timing you, so you can see that you actually have time to go around the whole arena one more time instead of freezing up. Just take your time, take a deep breath, and make sure you’re prepared to go in.”

While you have to read your test many times to memorize it, even this can be done strategically. “Really look at the directives,” says Miles. “If there’s a 20-meter circle that’s being judged, it tells you what’s being judged. After your circle, you might go up the long side before the next movement, and that’s the time to make a little adjustment if your horse is stiff and you need to do some suppling.” Studying the test for these little gaps between scored movements can pay off by helping you and your horse prepare for other parts of the test.

“The corners are usually good places to do this,” says Miles. “For example, if you’re going to do a lengthening on the diagonal, you’re not really being judged in the corner, so if you need to collect your horse’s stride or do a little leg-yield to make the lengthening better, it pays to know where you can do that [without losing points].”

Next time you are preparing for a dressage competition, keep these tips in mind and watch as your score improves!

Liked this article? Here are others you’ll love:

Improve Your Horse’s Jump with Grid Exercises from Gina Miles

Dressage Tips from the Judge’s Box

Score More in the Dressage Arena