Home Riding and Training English Riding Have a Seat

Trainer and judge Julie Winkel believes that a more perfect position makes a more effective rider. In line with that philosophy, she explains the four different seats she teaches her riders in order to be effective.

The first is the half-seat, which is also called the two-point or jumping position. Here, the rider closes his hip angle and rises out of the saddle, staying off the horse’s back. The second is the light-seat, where the rider maintains a closed hip angle, but his seat is settled softly in the the saddle. Next is the full-seat, also known as the three-point position, where the rider’s upper body is held nearly vertical, and his seat is in contact with the saddle. Finally there’s the strong-seat, or the driving seat, where the rider sits very deep in the saddle, with the shoulders held behind the vertical.

“By understanding the purpose of each seat, the rider becomes more knowledgeable of form following function,” Julie explains. “The half-seat is our jumping position, which allows the horse maximum freedom but gives the rider minimum control. The light-seat affords the rider a little bit more control to help balance the horse in the turns or for a change of lead. A full-seat is used with the rider needs even more control, such as an equitation rollback turn or for more collected work on the flat. The strong-seat is required in some instances with a spooky horse or on the approach to a difficult jump.

“An effective rider,” Julie emphasizes, “is proficient in all four seats, and they should be mastered on the flat before attempting them over a course of jumps.”

Back to Positioned for Success. 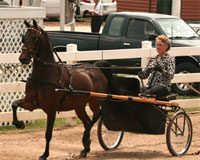