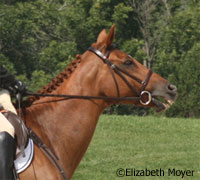 Few things can be more frustrating to a rider working with a green horse than trying to figure out and fix problems with head carriage. The list of evasive mouth issues is long. One example is a horse that’s behind the bit, which means he avoids contact with the bit and the rider’s hands by over flexing at the poll until his chin is nearly on his chest. Another example is a horse that escapes the bit by telescoping his neck until he looks like a giraffe. Then there’s the physically exhausting horse that leans on the bit, pulling against the rider’s hands and arms.

While each of these problems has its own particular solution–best addressed with professional help–the first impulse should be to have a vet rule out physical causes. A sore back, arthritic hocks and dental issues can cause a horse to evade the bit and resist the rider’s hands. Providing the horse is sound, the next step is to select the most appropriate bit for the horse. Rarely does that mean switching to a more severe bit or gadgets such as draw reins. In fact, many horses that evade the bit actually improve when switched to a milder bit and less equipment because it’s less intimidating. Ultimately, though, training problems associated with a horse’s headset will only get better with patience and consistent flatwork. And that has to be executed by a rider with a pair of sympathetic, educated hands.

Flatwork exercises that encourage a horse to bend and move laterally through turns will make him more supple, especially through his head, neck and shoulders. As he loosens up in his front end, he will become softer in the mouth. Upward and downward transitions from one gait to another encourage the horse to shift his weight and balance from his front end to his hindquarters. Once the horse begins to collect his stride he will lean less on the rider’s hands for support and become lighter and more responsive. Throughout the horse’s training, however, the rider must reward the horse for any signs of improvement by softening contact with his mouth.

Read more about developing good hands in the May 2010 issue of Horse Illustrated. Click here to subscribe.

Expert Exercise: Stretch and Climb Through