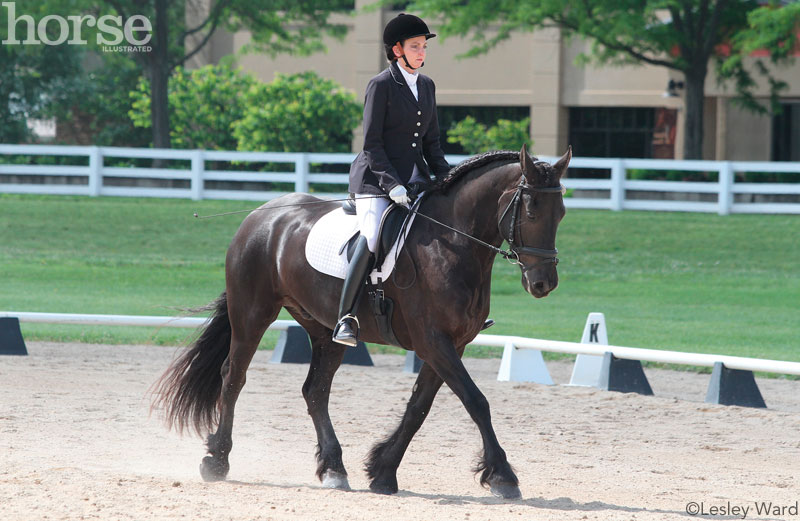 Q: I do dressage with my very lazy, thick-skinned Friesian. He doesn’t respect my leg or whip. What can I do to get a better response?

A: There are classical training methods to address the situation you have with your lazy horse. These involve tuning the horse to the aids, which is a humane system involving groundwork with a whip, voice cues, praise, and enough repetition until he clearly understands you and wants to comply.

Tack up your horse in a snaffle bridle and a saddle with the stirrups run up. You need a whip that is a bit longer than a regulation-length dressage whip; more like a buggy whip, but without the extra little lash that is usually about 8 to 10 inches long. If you have a buggy whip with such a lash, tape the lash to the stock, or cut it off and put tape around the end so it won’t unravel.

Have treats on hand. Stand by your horse’s left side and stroke him slowly and gently with the whip, reassuring him with your voice that you are not going to hurt him and that he is a good boy. Stroke him first on the shoulder with the grip of the whip (not raising the long stock into the air). If he isn’t frightened, then slowly raise the whip and gently stroke him over his rump and down his left hind leg, reassuring him with your voice. If he tolerates this well, give him a treat.

Now, holding the left rein near the bit with your left hand (reins around his neck) and the whip in your right hand, stroke your horse gently over his rump and down to his hamstring area and tap lightly, asking him to step sideways away from you with his hindquarters. If he does this correctly, he will lift his left hind leg and cross it in front of his right hind leg in a leg-yielding fashion, similar to a few steps of a turn on the forehand. If he does this well, praise him. Repeat it after a few seconds, followed by verbal praise and a treat. Repeat on the other side of his body, working to get him to cross his right hind leg over his left hind leg. Remember to praise him when he’s successful.

Next, mount up, and after walking for a minute or two, go back to the spot where you did the groundwork and ask for a few steps of a turn on the forehand, carrying the whip on the side of your active leg. Be sure to praise your horse for any effort. This can be in the form of your voice and a pat. Then, ask him to go straight forward at a brisk walk, closing your lower legs simultaneously and then releasing them a bit, and touch him lightly with the whip. Carry the whip in your inside hand (when riding to the left, this would be your left hand).

Apply the same principle to asking for the trot. When your horse feels lazy or is very slow to react, tap him behind your leg (not on his haunches) with multiple quick taps and say, “Trr-ot!” Use this technique for the trot-canter transitions as well.


My additional advice is to consider the horse’s potential to be an enjoyable dressage mount. If after trying the method I described there is very little improvement in his responsiveness, think about having an even more experienced rider than yourself ride and evaluate him. It may be that his temperament is so gentle that getting him to respond quickly to the forward and forward-sideways aids is not going to be possible beyond a certain point.

Liked this article? Here’s more advice for horse training troubleshooting:7 Under-Saddle Problems and How to Fix ThemCharging Up the Lazy Horse

CINDY SYDNOR has been long-listed for the U.S. Equestrian Team and is a dressage trainer and “R” judge based in North Carolina. 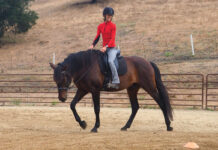