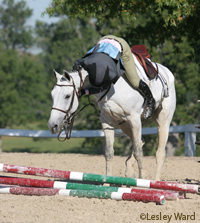 What happened? You were galloping down to a jump, your horse’s ears were up, and your eyes were analyzing the approach for a correct take-off spot. In your heart, you sensed a blue ribbon. But then, your horse made a sudden decision to avoid the jump, spraying sand against the arena railing and nearly sending you up and over his neck.

If refusals and run-outs are becoming habit, it’s time to take a serious look at why sometimes your horse just says, “No!” Here are four common stopping scenarios, their possible causes and ways to rehabilitate your riding and your horse’s mindset.

Apparently you were unaware that your horse had potential as a National Reining Horse Association champion. But sure enough, he can be cantering down to a jump with all the zeal of a steeplechaser when, right at the base of the obstacle, he slams on the brakes. Amazing, isn’t it, the way that he can stiffen his front legs inches away from the ground line, and then literally sit down on his haunches? Unfortunately, the sudden loss of forward momentum can send you hurtling through space and into the jump rails.

In many cases, the sliding stop is a refusal borne from pilot error. That can be a tough criticism to accept. Yet often a horse slides to a stop at the base of a jump because he realizes at the last instant that he simply cannot clear the hurdle from where he’s been placed. An otherwise honest horse—one that generally jumps without hesitation—that surprises everyone by abruptly stopping at an occasional jump may merely be saving both himself and his rider from disaster. This horse simply needs a better ride.

Note: While a horse that refuses jumps must be punished so that it doesn’t become a habit, there is a difference between educating the horse and abusing him. One or two smacks of a crop behind the rider’s leg are enough to explain to the horse that he has disobeyed a command. Spanking the horse in front of the girth is useless. The horse’s motor is located in his hindquarters.

On the other hand, a horse that incurs a multitude of bad rides soon learns that it’s just as easy to slide to a stop as to go over the jump from an awkward take-off spot. He becomes what’s termed a “dirty stopper.” Such a horse is forever waiting for a rider’s split second of indecision. Being dropped at the base of the jump, meaning the rider slackens the reins and assumes a defensive posture in the saddle, is the cue a dirty stopper lives for. The only correction is for a more skilled rider to school the habitual stopper. At any point that the horse slides to a stop, the rider must discipline the horse with a smack of the crop behind the girth. An even better solution? Be an accurate, determined rider.

At least the dirty stopper makes it to the base of the jump. The jump-shy horse is so committed to not jumping a particular obstacle that he will proclaim his intent from several strides away, perhaps as soon as he rounds the corner and grasps where he’s heading. His body language seems to scream, “You have got to be kidding!” This emotional conveyance is combined with histrionics, such as bulging eyes, flared nostrils, pricked ears and a neck elevated like a giraffe. When urged forward, the expression can turn into outrage, with pinned ears and a swishing tail. Defiant, the jump-shy horse may even rear when the rider demands that he approach the jump.

Green or young horses that are overfaced beyond their level of experience may balk at spooky or challenging jumps. Older horses can carry this act to the extreme, particularly those that have learned how to get the best of novice riders. Oh, what thespians they are! Their performance begins as soon as the novice aims them toward the offending obstacle. Then they cease their forward motion and add flourishes such as whirling or bolting to further intimidate the rider.

To prevent jump shyness, the green horse should be slowly introduced to the same sort of jumps he’ll encounter in the show-ring. A variety of obstacles, such as artificial flowers, miniature paddock gates, little wooden boxes covered with artificial turf and striped poles can all be used at home to acquaint the green horse with his new job environment. Any jump that spooks the green horse at a show should be re-created at home for the next schooling session. And the wily veteran horse that begins his refusal process in the corners needs a hiatus from the beginner’s riding school program. (He may also need a veterinary exam to rule out soundness issues.) When he’s convinced by an experienced rider that his melodramatic antics only bring forth retribution, he’ll become trustworthy again.

Lines are the mainstay of hunter and jumper courses. If a horse and rider cannot maintain a straight pathway, there’s a good chance they’ll miss the related jumps in a line. For example, the horse jumps safely into the first element of a line, but upon landing he begins to drift or bulge off to the side. With each stride, the drift becomes more evident. Soon he’s no longer aimed at thecenter of the upcoming jump. In fact, he may be staring straight into the standards. His only option? Bypass the entire obstacle.

Some horses have a natural tendency to drift. It’s noticeable from the time they begin their careers over jumps. First it should be determined if there is an underlying unsoundness that is causing the horse to favor bearing weight on one side of his body over the other. Once that’s ruled out, the rider must focus on teaching the horse to be straight in his flatwork and to carry himself in a balanced frame of self-carriage. Plus, the horse must be taught to respect the rider’s aids. Regardless of whether the horse is green or a seasoned campaigner, if he does not respond to subtle pressure from the rider’s leg, he will not move laterally within a line of jumps to remain on a straight flight path.

Sometimes, drifting inside a line of jumps becomes a lazy habit, especially in dull horses that are nonchalant about their jumping. Or the rider may not realize just how crooked he or she allows the horse to travel. An easy solution is to use ground poles to mark a sort of alley within a line of jumps. The poles can be set about 6 to 8 feet apart, perpendicular to the jumps. They act as straightening poles and will thwart a horse’s desire to drift and reinforce a rider’s attempt to ride a straight line from one jump to the next. Another tip is to add a cone, marker or human helper at the far end of a line, directly in the center. When a rider has a focal point to aim for, sometimes it’s easier to concentrate on maintaining a straight pathway.

At its most benign, the cause of a run-out may be as simple as a green horse that is genuinely scared of the jump. He cannot think fast enough to organize a sliding stop, so the path of least resistance is to simply cruise around the jump. Seems like a simple enough plan. The dastardly “runner outer,” though, is well aware that running out is a very, very bad thing to do. So he cloaks his intentions until the moment of take-off, and then dives off to the side. Worse, since he knows that punishment is coming, he bolts into a gallop, as if he can avoid the repercussions by running away.

There are two important methods for correcting a run-out. First, slow down. The primary cause of a run-out is that the horse approached the jump at too fast a pace. A fast pace intimidates the green horse and it gives the conniving horse the upper hand. At a slower pace the green horse has time to think and prepare for the jump, and the naughty horse remains under the rider’s control. When addressing a run-out, the horse’s pace should be reduced to a manageable trot on the next approach (lower the element to an appropriate height). It’s much easier to contain the horse and place him at an accurate take-off spot when trotting. Second, when disciplining a horse that has run out at a jump, bring him to a halt. Then turn him in the opposite direction that he ducked away from the jump. For example, if the horse ran out to the right of the jump, pull him to a stop, and then turn him to the left. Do not complete the circular route he wanted. That just reinforces his evasion.

Regroup and Ride On

Oh, the horror of it all! How can you contain your embarrassment, disappointment and utter humiliation when your horse refuses or runs out during a show? Perhaps you can take heart in knowing that even at the highest echelons of show jumping, such as the Olympic and World Cup events, some of the best riders experience the same despair. Yet they don’t make a public display of their emotions. They quietly regroup and ride on, perhaps approaching the fateful obstacle a little differently. Or they might add a smack of the crop or an audible cluck at the base of the jump. Then, once outside the show-ring, they analyze what led to the refusal or run-out and strategize so that it won’t happen again.

You, too, can accomplish much by keeping your cool when your horse stops at a jump. Stay focused on your goals. Stop and settle your horse. Determine what caused the refusal or run-out. Decide how you are going to correct your riding and your horse on the next approach. Then remain vigilant for the remainder of the round so that the fault isn’t repeated.

Having an instructor or trainer watch your rounds and guide you in the warm-up ring is invaluable, especially if you’re dealing with a horse that refuses or runs out. They may be able to spot weaknesses in your riding that contribute to the stopping problem. And there’s certainly no shame in having a more experienced rider hop on your horse and school him in a class or two. Besides, having moral support and expert advice will encourage you to stay in the saddle, keep your courage and ride on!

Cindy Hale is a regular contributor to Horse Illustrated and the author of Riding for the Blue and A Passion for Horses.

Online Riders Collective Launches Clinics for a Cause