Read on to learn more about the American Horse Council 2017 survey that has taken place and how it will affect today’s horse owners.

While her barnmates are away at a show, Dianne Welde is getting her horse Ringo ready for a ride in the arena at their home barn. “I just don’t have the interest in showing anymore,” says Welde, as she brushes her horse. “I just want to enjoy him. I don’t want to compete, I don’t want to join any organization, I just want to ride my horse.”

Welde is not alone. In many ways, she is the “new” horse owner: over 50 years old, sparing no expense when it comes to caring for her animal, but finds few perks in joining any breed- or discipline-specific association.

She is also the kind of horse owner who is challenging equine industry organizations to find ways to retain existing members and to attract new ones, even as the equine industry in general seems to be recovering from its long, deep recession.

According to the American Horse Council’s 2017 equine industry survey, more than 7.2 million horses reside in the U.S. Of those, 7,090,405 reside in home pastures or boarding barns, and another 156,430 reside in rescues, sanctuaries, Amish households or businesses and in equine-assisted therapy (EAAT) operations across the country.

Meanwhile, the maintenance and care of those horses figures significantly into the nation’s overall economy. According to the survey, the industry directly contributed $50 billion to the gross domestic product (GDP), and generated 1 million jobs and $38 billion in wages in 2017. In total, the U.S. equine industry is valued at more than $122 billion, the survey reveals.

Meanwhile, a separate study by the Food and Agricultural Organization of the United Nations (FAOSTAT) estimates that while some horse owners are reluctant to add to their stock, many will retain the animals they have, so long as the economy continues to improve or at least remains constant.

“Now we’re seeing that sales are picking up and breeders are producing, and farms that have been empty for years are filled,” she says. “In the past, people didn’t even go to horse shows, but now I see a lot of people happy about themselves and happy about the industry. It all means that the industry is recovering, but it is slow.”

As a result, keeping members engaged in breed- or discipline-specific organizations is critical.

According to a 2017 U.S. Equine Market study of equine ownership, spending and industry trends conducted by the Maryland-based consumer research firm Packaged Facts, the equine industry was at its zenith in 2002. This is when association membership and breeding were at their peak, and the Great Recession was still five years away.

“The entire industry is well aware of it, and is looking into what we can do to engage many kinds of people,” says Marty Irby, executive director of Animal Welfare Action, an equine welfare advocacy group.

At the same time, the industry is growing older. According to the American Horse Council survey, the median age of a horse owner in the U.S. is 38 years of age. Twenty-two percent of horse owners are 25 to 34 years old; 20 percent are between the ages of 34 and 44; and 23 percent are age 45 to 59.

In response, several breed- and discipline-specific industry associations are also asking their members what they can do boost participation in those organizations and the industry as a whole.

“We’re asking questions such as, ‘Does [our] specific target audience realize what the horse industry has to offer?’” says Mikayla Boge, M.S., director of marketing for the Arabian Horse Association. “It is a work in progress.”

The American Quarter Horse Association (AQHA) has been asking those questions too. Considering everything from better ways to communicate with members to new ways to educate them, the organization has mapped out a strategic plan geared toward giving members lots of options. According to Sarah Davisson, manager of publicity and special events for the AQHA, these include a program that allows trail riders to compete for standings by logging their hours in the saddle, and horse shows where riders compete for rankings in a range of disciplines, from western pleasure to dressage.

“The AQHA constantly evaluates the Association’s programs to ensure we are meeting the needs of our members, potential new members and horse lovers around the world,” says Davisson.

But growing membership is not enough, says Christy Counts of The Right Horse, an initiative created to boost successful equine adoptions and welfare by matching horses with riders to benefit both. Equally important is growing equestrian activities as hobbies that anyone can enjoy, whether they own a horse or not.

“Many people are interested in horses [who] don’t have access to a horse but are willing to support horse programs,” says Counts. “The more people who are passionate about equines, the better.”

In fact, that’s exactly what U.S. Equestrian (USEF) hopes to do through its Fan Membership, says Julian McPeak, director of communications and marketing for the USEF. For an annual fee of $25, USEF Fan Members receive full access to a library of educational videos, may search competition standings and results, and can view more than 2,000 hours of live and on-demand content via the USEF Network.

The concept keeps non-competing equine enthusiasts engaged in the industry, with the hope that they continue to stay involved and, perhaps, make the decision to move toward a competing membership, McPeak says. “It also attracts general fans of horse sports, which helps USEF and the sport as a whole grow.”

But while industry organizations ponder new ways to keep horse enthusiasts engaged, there are other new challenges that will certainly change the future for the horse industry in general.

In the past, breed and discipline associations could always count on a steady pool of potential members whose brothers, sisters, parents and grandparents had traditionally been involved in horse-related activities. Those days are gone, says Jennifer Woodruff, trainer, instructor and multidiscipline judge for 4-H and Pony Clubs in Ohio and elsewhere.

According to the AHC survey, the average age of participants in horse-related activities is 22. Meanwhile, 30 percent of those who participate in horse-related events are 18 years of age or younger. In fact, thanks to competition from other sports and the prevalence of high-tech activities, the ranks of young equestrians coming through traditional youth-centered programs are growing thinner every year, says Woodruff.

“I do see numbers in 4-H and Pony Clubs declining, but I think that’s a reflection of the culture in general,” she says. “Kids are so into high-tech today, and I’m not sure many of them want to make the commitment horse [activities] require.”

The good news is that kids coming up through Pony Club and 4-H programs are participating in new ways, according to Woodruff.

“Shows are smaller, but when the young people do show, their performances are of a higher quality,” she says. “Also, some [youth] organizations are beginning to offer kids other participation options, such as trail riding competitions and horse judging.”

It’s a start, agrees Molly O’Brien, program director for Time to Ride, an initiative of the American Horse Council dedicated to sustaining and growing the U.S. horse industry over the long term.

“Time To Ride’s mission is to attract newcomers to horses and horseback riding by helping them find instructors, equine facilities and events in their local area,” says O’Brien.

As a result, Time to Ride’s primary targets are moms who are actively looking for activity outlets for their children.

“We serve to help connect them with local equine facilities,” she says. “[Kids] between 5 and 9 years of age are a target so they can consider and compare equestrian sports to other activities.”

But the program also aims to attract potential equestrians across the demographic spectrum.

“Secondary targets include ‘empty-nest’ women who either rode when they were younger and would like to become involved again, or have no horse experience but always wanted to ride; and millennials, who are often looking for group activities such as trail rides,” O’Brien says.

Still, piquing the interest of millennials is complicated.
“The horse industry has not done a good job in communicating with young people, including using appropriate avenues of social media,” Christy Counts points out.

At the same time, the industry needs to reflect the generation’s values if it ever hopes to attract them.

“In many cases, the people running industry organizations have a whole different way of looking at things like animal welfare issues,” Counts says. “If we’re going to attract millennials, we have to speak to their values.”

So while young people might avoid certain disciplines, such as racing, on the grounds that the use of whips is considered inhumane, they do appreciate the physicality of eventing.
“And kids are making videos on YouTube, doing their own training and sharing their experiences,” she says. “They’re doing all kinds of cool things.”

Exactly what the future of the horse industry is remains uncertain. What is certain is that it will probably involve new roles for horses and horse industry organizations.

“For example, the role of [equines] in therapy is growing, so that’s going to be a major role for horses,” Counts predicts. “In any case, we have to find ways that we can keep horses in our lives.” 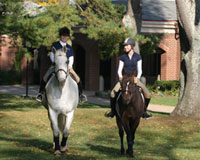