Vaccinations can protect your horse against diseases that can be serious or even fatal. There are many different types of vaccinations available, but most horses don’t need all of them. However, the American Association of Equine Practitioners recommends that all horses receive “core vaccinations” against eastern and western equine encephalomyelitis, West Nile virus, tetanus and rabies. Some horses (for example, those exposed to large numbers of horses at shows/events or traveling to an area experiencing an outbreak of a specific disease) may also need “non-core vaccinations,” such as those for equine herpesvirus, strangles and Potomac horse fever.

West Nile virus infection (WNV) is also spread by mosquitoes. Wild birds are an important source of the virus and often show no signs of disease. The symptoms of WNV are quite variable. In general, they resemble those of EEE/WEE, but may also include colic, lameness and appetite loss. Most infected horses show some incoordination and paralysis. Muscle tremors of the face or neck muscles often occur, along with weakness or paralysis of the muscles of the face and tongue. The disease can cause behavioral abnormalities ranging from nervousness to hyperexcitability. Death occurs in about 30 to 40 percent of the cases.

Tetanus is caused by a toxin produced by Clostridium tetani, bacteria found in the intestinal tract and soil. Infection occurs when the bacteria enter a wound that provides a suitable environment for growth, such as a puncture wound. The likelihood of infection is not related to the severity of the wound. Initial symptoms include muscle stiffness in the jaw, neck, hind legs and the area of the infected wound. More extensive stiffness, along with muscle spasms and hyperexcitability in response to external stimuli, occurs within 24 hours. A horse with tetanus has a characteristic facial expression: flared nostrils, tensed lips pulled back, prolapsed third eyelid and erect ears. Eating becomes difficult. The horse resists movement and adopts a “sawhorse” stance, with front legs extended forward and rear legs extended back. Relatively minor motions or sounds can trigger violent muscle contractions. Increased heart rate, arrhythmias (abnormalities of the heartbeat) and high blood pressure also occur. Involvement of the muscles of respiration can lead to death. The survival rate for tetanus averages about 20 percent.

Rabies is a viral disease that can affect any mammal. It occurs when a rabid animal (usually a skunk, raccoon, fox or bat) bites the horse and virus-containing saliva enters the bloodstream. The wound often occurs on the muzzle or face (because the horse extends its muzzle to investigate the odd behavior of the rabid animal), but can occur anywhere on the body. The symptoms of rabies, which are caused by encephalitis (inflammation of the brain), include behavioral changes and unexplained paralysis. The affected horse may become hyperexcitable, vicious and unpredictable, attacking other animals, humans, or even itself. In some cases, the major symptom is paralysis of the throat and jaw muscles, which rapidly progresses to the rest of the body. These horses may show no signs of aggression. The incidence of rabies is relatively low in horses, but the disease is invariably fatal.

Taking care of vaccinations isn’t just a matter of picking up some vaccine at the feed or supply store and getting it into your horse. Even if you know how to give an intramuscular injection, there are some good reasons why you shouldn’t take a do-it-yourself approach to your horse’s vaccination program: 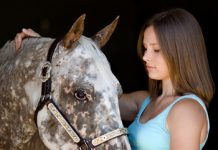 The Dual Recovery of Sunday, the May 2020 Horse Illustrated Cover Model, and Owner Kaia Kroll 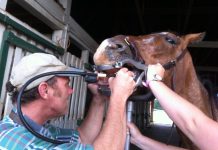