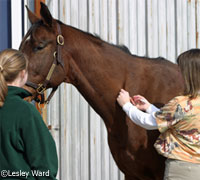 Vaccinating
your horse can help keep him healthy and in some cases save his life.
According to the American Association of Equine Practitioners, every
horse should receive “core vaccinations” against diseases that
threaten the general horse population—eastern and western equine
encephalomyelitis, West Nile virus, tetanus and rabies. Click here to take the Horse Health College course on core vaccines.

Other
vaccinations—“risk-based vaccinations”—protetct against
diseases that usually affect only certain horses, such as those
exposed to large numbers of horses at competitions or those traveling
to an area experiencing a disease outbreak. These diseases include
anthrax, botulism, equine influenza, equine herpesvirus, equine viral
arteritis, strangles, rotaviral diarrhea and Potomac horse fever.

Does
your horse need risk-based vaccinations? That’s a question best
answered by your veterinarian, who can recommend a vaccination that’s
best suited to your equine friend’s individual needs.

Anthrax
This
rapidly fatal disease, caused by a spore-producing bacteria, affects
horses as well as other animals and humans. Infection can occur if
the horse ingests or inhales the spores, or if the spores contaminate
a wound. Fortunately, anthrax is not widespread, occurring only in
areas with alkaline soil conditions, which allow the organism to
survive. Horses pastured in areas known to have a high level of
anthrax spores in the soil should be vaccinated.

Botulism
Botulism
is caused by powerful toxins produced by Clostridium botulinum
bacteria, which is also found in the soil. The toxin blocks
transmission of nerve impulses, which causes progressive weakness,
paralysis, inability to swallow, and often death. Shaker Foal
Syndrome and Equine Grass Sickness are examples of two forms of
botulism that affect horses.

Equine
Influenza
This
highly contagious viral disease is one of the most common infectious
diseases of the equine respiratory tract, especially for horses from
one to five years old. Although equine influenza is found throughout
much of the world, epidemiologic findings indicate that infected can
be evaded by quarantine procedures (for example, isolating
newly-arrived horses for at least two weeks) and pre-exposure
vaccination.

Equine
influenza is spread by virus-containing droplets dispersed during
coughing. The signs of infection include a high fever, watery nasal
discharge and a harsh, dry cough.
Lethargy, weakness and lack of appetite commonly occur. The clinical
signs usually last only a few days, but the cough can persist for
weeks. In mild cases, recovery occurs in about 2 to 3 weeks; in
severe cases, it can take 6 months. Because the influenza virus
attacks the lining of the respiratory tract, affected horses may
develop secondary bacterial infections such as pneumonia and chronic
bronchitis.

Equine
Herpesvirus
Equine
herpesvirus type 1 (EHV-1) and type 4 (EHV-4) cause respiratory
disease ranging from subclinical to severe. Symptoms include fever,
malaise, lack of appetite, nasal discharge and cough. Infection
usually occurs in young foals, but also occurs in weanlings,
yearlings and other young horses, such as those starting training.
EHV-1 can cause abortion in mares, the birth of weak foals, or a
paralytic neurologic disease. EHV-1 and EHV-4 are spread via
secretions of infected coughing horses, by contact (direct and
indirect) with nasal secretions, and for EHV-1, contact with aborted
fetuses and associated fluids and tissues. The viruses become dormant
in most horses, which show no signs of infection or virus shedding
until they are stressed.

Equine
Viral Arteritis
Equine
viral arteritis doesn’t usually cause life-threatening illness in
health adult horses, but it can cause abortion in pregnant mares and
occasionally causes death in young foals. Infected post-pubertal
colts or stallions usually become persistent carriers. Transmission
frequently occurs by direct contact with respiratory secretions, as
well as by venereal transmission by infected breeding stallions. The
virus can also be spread through contact with contaminated objects.

Equine
viral arteritis infections are often subclinical or even
asymptomatic. Clinical signs, when present, include fever; lethargy;
lack of appetite; swelling of the lower limbs, scrotum, prepuce or
mammary glands; hives; swelling around the eyes; conjunctivitis
(inflammation of the lining of the eyelids); and a watery or mucoid
nasal discharge. Abortion frequently occurs in unvaccinated pregnant
mares. Young foals may develop pneumonia, which can be fatal.

Potomac
Horse Fever
Potomac
horse fever is caused by Neorickettsia risticii, a bacteria-like
organism. Originally identified in the eastern United States near the
Potomac River, it also occurs in other temperate locations, primarily
between late spring and early fall. Cases tend to occur in areas
where the disease has been confirmed.

The
signs of Potomac horse fever include fever, mild to severe diarrhea,
laminitis, colic and decreased abdominal sounds. The disease can
cause fetal infection and abortion in pregnant mares, but this is
uncommon. The risk of infection is low in foals.

Rotaviral
Diarrhea
Equine
rotavirus is a significant cause of foal diarrhea, causing more than
half the cases in some areas. The disease can affect as many as 50
percent of susceptible foals, but with appropriate veterinary care,
the death rate is less than 1 percent. Transmission of the virus
occurs when the foal ingest fecal material. The resultant intestinal
damage causes maldigestions, malabsorption and diarrhea.

Vaccinating
a mare prior to foaling will markedly increase the foal’s antibody
titer to rotavirus. Vaccination of a newborn foal has no effect on
the severity of rotavirus infections.

Strangles
This
highly contagious disease, which commonly affects young horses, is
caused by the bacteria Streptococcus equi subspecies equi. The
organism is spread by direct contact or by indirect contact with
stalls, pastures, grooming equipment, hands, clothing and even
insects contaminated with nasal discharge or pus from draining lymph
nodes.

Signs
of strangles include fever; difficulty eating or swallowing; lack of
appetite; noisy breathing; swollen lymph nodes (with or without
abscess formation); and thick yellow mucoid nasal discharge. After
recovery, some horses become carriers and shed the bacteria for
variable periods of time.

In
some horses, exposure to streptococcus antigens via infection or
vaccination can lead to purpura hemorrhagica, a non-contagious
disorder caused by an immune-medicated vasculitis (inflammation of
the blood vessels). Clinical signs include hivs with edema (swelling)
of the legs, lower abdomen and head; hemorrhages under the skin and
or mucus membranes (such as those in the mouth), tissue sloughing,
and swelling of the head, which may limit breathing. Horses with
purpura hemorrhagica need prompt veterinary care.