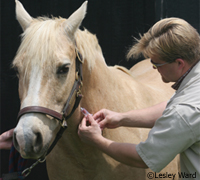 West Nile virus, a relatively new disease in horses, is transmitted by mosquitoes and found across the United States. Capable of causing severe neurological problems and death, this virus is preventable with proper vaccination.

West Nile virus is a member of the genus Flavivirus, an extremely common genus of viruses found around the world. Birds are the reservoir for this virus, meaning they are the population where the virus can easily replicate and successfully be transmitted to other animals. Most viruses need a reservoir population, since viruses cannot survive for long outside in the environment. The virus is then spread when mosquitoes feed on infected birds. The mosquitoes are called the vector of this disease, since they spread it when they feed on another animal, such as another bird or horse. West Nile virus is most commonly spread through blood transmission in this way. Outbreaks are seen most commonly in late summer to early fall, which corresponds to the time of year when mosquito numbers are the highest.

Prior to 1999, West Nile virus was not found in the US. An outbreak of the disease in New York in 1999 is thought to be due to an infected mosquito entering the country on an airplane. Since then, the disease has spread quickly across the continental US as well as parts of Canada and Mexico.

Horses are considered dead end hosts for this virus. This means that once in a horse, the virus cannot be transmitted to another animal. Transmission of this virus only occurs as a result of a bite from an infected mosquito that has previously fed on an infected bird.

Several other species can also contract West Nile virus. Most notably, humans can contract the disease if bitten by an infected mosquito and human deaths have been reported. Dogs, cats, sheep, and squirrels have also been reported positive for the disease, although this is much less common. Even farmed alligators have tested positive! However, most cases of West Nile virus are seen in birds, with horse and human infections being second and third, respectively.

West Nile virus causes an inflammation of the brain called encephalitis. When an infected mosquito bites a horse, the virus is transmitted into the horse’s blood stream. Then the virus undergoes an incubation period of about seven to ten days. After this period, the virus reaches the brain and spinal cord, causing inflammation that damages these sensitive tissues, resulting in neurological problems.

The initial clinical signs of a horse infected with West Nile virus include a mild fever (about 101.5 to 103.5 degrees F), lack of appetite, and lethargy. Then, neurological signs begin. These more serious signs develop rapidly and become progressively worse. An infected horse may initially have difficulty standing and keeping his balance. He may also have muscle tremors. These signs may then develop into complete paralysis of one or more legs. This typically occurs in the hind legs. If nerves in the face are affected, facial tremors may be seen.

A proper veterinary diagnosis of West Nile virus is very important. This is because the clinical signs of this infection are very similar to other neurological infections such as EEE (Eastern equine encephalitis), WEE (Western equine encephalitis), and equine herpes virus. West Nile virus can even appear similar to botulism and rabies. EEE, WEE, and rabies are all very serious diseases that can be spread to humans by horses, therefore West Nile needs to be differentiated from them by appropriate testing.

If a horse is suspected of West Nile virus, a veterinarian will conduct a thorough physical exam including a detailed neurological exam to evaluate the horse’s clinical signs. Then blood is drawn and submitted to a lab that will measure antibody levels to the virus. If antibody levels to the virus are high, this indicates infection with West Nile virus.

The only treatment for West Nile virus is supportive care. No antiviral medications have been developed against this disease in horses. Anti-inflammatory agents such as phenylbutazone (Bute) and flunixin meglumine (Banamine), as well as steroids and DMSO can be administered to reduce inflammation caused by the virus. Sometimes vitamin E is given as an antioxidant to help support the nervous system. If the horse is unable to rise or eat, IV fluid therapy and further nutritional support may be required, along with physical therapy or support with a sling.

Young horses less than three years of age and horses older than fifteen years of age are the most vulnerable to West Nile infection. This disease has an approximately 30% mortality rate; mortality depends greatly on the health and immune status of the animal prior to infection.

Since all horses living in the US are at risk for West Nile virus, prevention against infection should be instituted no matter where you live. Fortunately, there are multiple USDA approved West Nile vaccines currently on the market. The American Association of Equine Practitioners considers the West Nile virus vaccine a core vaccine that all horses should receive on a regular basis.

Specifically, adult horses that have been vaccinated previously should receive an annual booster every spring, before mosquitoes are out. Adult horses that have never been vaccinated against West Nile before, or have an unknown vaccination history, should receive two boosters, three to six weeks apart depending on the type of vaccine given. After the initial two boosters, these horses can be re-vaccinated annually in the spring. Foals generally should receive a series of three boosters to ensure full protection. Timing of these boosters depends on the vaccination status of the mare and the particular type of vaccine. Before starting a vaccine regimen, consult your veterinarian.

Further protection against West Nile virus involves adequate mosquito control around your barn. Regular fly spray application will help reduce insect bites on your horse as will stalling your horse at night with proper air circulation, such as a fan. Reducing the amount of standing water around the barn will also help reduce the number of mosquitoes.

Although West Nile virus is prevalent in the US and known to cause death in horses, there are very reliable ways to prevent this infection in your horse. Knowing about the disease and its prevention is the best first step in protecting your horse.

Return to all course materials >>