Home Horse Ownership Stable Management Are There Poisonous Plants in Your Horse’s Pasture? 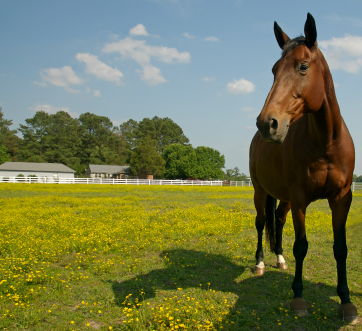 A springtime meadow filled with a rainbow of colors and shades is a lovely sight to behold—except when that meadow is your horse’s pastures. Some of the wildflowers and weeds that abound during spring and summer are toxic to horses and may become increasingly toxic as they wilt in the fall.

Horses have evolved to avoid many common poisonous plants as they find most of them unpalatable. But there are exceptions—tasty species that can do harm. Furthermore, horses that don’t have access to good grazing and aren’t provided with supplemental forage may resort to eating whatever greenery they can get their teeth on, even things they wouldn’t normally eat.

In this article, we’ll look at some of the more common threats to horse health that are found in North American pastures, but it is not meant to be a comprehensive list. The best way to find out what plants are a threat to horses in your area, and for help identifying what you have on your property, is to contact your local extension office. You can also use the database maintained by the American Society for the Prevention of Cruelty to Animals to find out what plants pose a risk to horses and other domesticated animals.

You may have heard of instances of horses developing laminitis after having their stalls bedded with black walnut shavings. Sawmills that provide horse bedding know to keep the black walnut wood far away, but accidents happen, and contamination can have devastating results. Symptoms of colic or laminitis begin to appear around 12 hours after a horse has been put on contaminated shavings. The reaction begins when a horse either consumes some of the bedding or inhales the fumes. Fresh shavings are more toxic than a batch that has had some time to air dry.

While bedding is the most commonly implicated source of black walnut poisoning, the trees themselves can sometimes cause problems. Horses that chew on the bark or wood of a black walnut tree also risk poisoning. Again, most horses will not resort to nibbling on trees if they have adequate forage, and plenty of farms have black walnut trees on the property without any problems. But because of the risks, it’s best to avoid this species when possible.
Learn more >>

The red maple is prized for its stunning fall color transformation and is commonly found in the eastern United States and southeast Canada. But when those leaves fall and shrivel up, they become a horse hazard. Horses that consume 1.5 pounds or more of these wilted leaves may show colic-like symptoms, difficulty breathing, lethargy, jaundice and dark-brown urine. Consumption of four or more pounds (or less, for ponies) has been found to lead to serious poisoning and in many cases, death.

Interestingly, the fresh, green leaves of the red maple have not been found to cause symptoms. Other varieties of maple, such as sugar or silver maples, are not a confirmed risk, but there is some preliminary evidence that they can cause poisoning in horses.

If you have red maples in or around your pastures, be sure to remove any downed limbs before the leaves wilt. If you rake the leaves in the fall, be sure to remove them immediately so that they don’t blow into your horse’s pasture. A few scattered leaves probably won’t cause problems, but you don’t want a large quantity of the wilted red maple leaves appearing in your pasture all at once.
Learn more >>

These bushes are commonly used for landscaping purposes and their branches are often used in Christmas wreaths. English Yew, Canada yew and Japanese yew are known to be toxic to horses and other animals, including deer and cattle. The toxins found in the needles and seeds can lead to abnormal heart rhythm. Symptoms include muscle trembling, incoordination, difficulty breathing, and ultimately death within a few hours of consumption.

Because these ornamental shrubs are often trimmed and shaped for landscaping purposes, it is often the trimmings that are implicated in poisonings. While having yew growing in your front yard is probably safe, keep them far away from pastures and dispose of trimmings immediately. Decorations made from yew should be hung far out of reach of horses.
Learn more >>

Beautiful but deadly, the Oleander has been implicated in the deaths of many horses over the years. This flowering shrub is popular in California and other southwestern states, but its leaves are toxic to horses and other animals, including humans. This plant has a bitter taste that most horses will avoid. Poisonings can occur when the trimmings from a shrub end up in a pasture and consumed along with grass or other forage.

Many horse owners are surprised to find out that buttercups are toxic. Though technically a weed, these cheerful flowers decorate many horse pastures with none of the residents ever showing signs of poisoning. Horses are adept at avoiding these ubiquitous plants, and so they usually don’t cause problems. However, indiscriminate eaters or horses with no other choices may consume them.


The leaves of the buttercup cause irritation in a horse’s mouth when fresh. That, along with their bad taste, is enough to keep any horse that isn’t starving away from them. But if a horse continues to snack on them, they will display symptoms including increased salivation, loss of appetite, colic and diarrhea. In severe cases, buttercup poisoning can lead to convulsions and death, but this is extremely rare.

Because they are a widespread weed, it’s difficult to eliminate buttercups from pastures. However, if your pasture is overrun with them, that could be a sign that your pasture is overgrazed. Good grass will help keep this opportunistic weed out, and with better forage available, there is minimal risk of your horse nibbling on buttercups.
Learn more >>

Another bright yellow hazard, Tansy Ragwort grows throughout North America’s west coast and can be found in the Northern U.S. and Eastern Canada. This plant is toxic to horses and livestock, having been implicated in major losses for the beef cattle industry. Toxins in the plant lead to irreversible liver damage. A small amount might not do serious harm, but the effect is cumulative; small amounts of ragwort consumed over a long period of time can lead to liver failure in the same way that a large quantity consumed at once would. For this reason, it’s important to rid your property of this weed rather than assuming your horses will avoid it; even a few accidental nibbles over time could prove devastating.


If you find this plant on your property, you’ll need to dig it up from the roots before they go to seed. Mowing or cutting is ineffective for ragwort as it can grow back unless completely removed. Wear protective gloves when handling ragwort, and avoid inhaling the pollen if the plant has already flowered (ideally, you’ll get rid of this nuisance before it is in bloom.) In case of widespread infestation, you may need to enlist the help of an herbicide to kill off this toxic weed.
Learn more >>

The term Locoweed refers to several different types of plants that produce a toxic substance called swainsonine. Unlike most other toxic plants, horses and livestock don’t find this weed unpalatable, and after grazing on it, they may even begin to seek it out. Also called crazy weed, this plant is so named because it can cause animals to act strangely when they become intoxicated by it. Horses may lack coordination and begin to react nervously or violently to routine stimuli. Locoweed poisoning can also lead to weight loss, reproductive problems and birth defects.


Locoweed plants grow primarily in the dry southwest U.S. When discovered in a grazing area, animals should be removed from that area. There is no known treatment for locoweed poisoning, and horses won’t avoid the plant when they have access to it.
Learn more >> 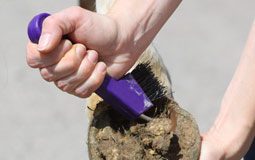