Read on to learn more on the 2018 World Equestrian Games team dressage results and how Germany walked away with the gold medal.

Some of the most successful riders in the sport took their turns during the second day of dressage competition at the FEI World Equestrian Games Tryon 2018. Defending champion, Charlotte Dujardin of Great Britain, was on the schedule with her new top ride, Mount St. John Freestyle. The sport’s most successful competitive rider, Isabell Werth of Germany, rode Bella Rose. And the current star of the United States’ team, Laura Graves and Verdades, had the final test of the day.

Dujardin and Freestyle turned in an exceptional ride to earn a 77.764%, which put them in fourth place individually and brought the British team up to bronze medal standing. The Hanoverian mare hasn’t quite reached the polish that Dujardin’s former mount, Valegro, had at tough competitions, but at just nine years old, she’s likely to continue to be a contender.

Graves and Verdades showed the style and flash they’ve become known for in the dressage arena. The notoriously difficult Dutch gelding is now a veteran of top-level competition, but he still managed to throw in a small spook at C. However, with an exceptional test overall, the pair scored an 81.537%, leading the U.S. team to silver.

No one could top Werth and Bella Rose today. The reigning Olympic champion rode the 14-year-old Westphalian mare to an 84.829%. Her German teammate, Sönke Rothenberger, scored an 81.444% with the Dutch gelding, Cosmo, finishing the day closely behind Graves. Their teammates, Jessica von Bredow-Werndl’s with TSF Dalera BB and Dorothee Schneider with Sammy Davis Jr., finished ninth and 13th overall, giving the German team a decisive gold medal victory.

Kasey Perry-Glass of the U.S. stands in eighth place individually after her ride with Goerklintgaards Dublet today. Rounding out the U.S. team, Adrienne Lyle and Salvino are currently 14th individually and Steffen Peters is 18th with Suppenkasper.

The flags currently look pretty similar at the top of the three-day eventing leaderboard after the first day of dressage. Germany’s Julia Krajewski is the overnight leader with the Hanoverian gelding, Chipmunk FRH. U.S. rider Boyd Martin, a veteran of multiple WEG and Olympic teams, is currently in second place with the stunning black Trakehner gelding, Tsetserleg. Piggy French of Great Britain stands in third with Quarrycrest Echo.

U.S. team member Lauren Kieffer rode her Anglo-Arab, Vermiculus, to end the day in 19th place. Will Coleman, competing for the U.S. as an individual, is 27th on the leaderboard.

The second half of the eventing field will perform their dressage tests tomorrow. American Lynn Symansky and her Thoroughbred, Donner, will ride at 10:19 a.m. EDT. The final American pair, Phillip Dutton with Z, are scheduled for 2:42 p.m.

Hurricane Florence is a frequent topic of conversation at the Tryon International Equestrian Center this week. Current projections show the effects of the hurricane reaching the area on Sunday, when the final round of dressage and the stadium jumping phase of eventing are scheduled to take place. Currently, there are no changes to the schedule, but regular weather updates are posted at tryon2018.com. 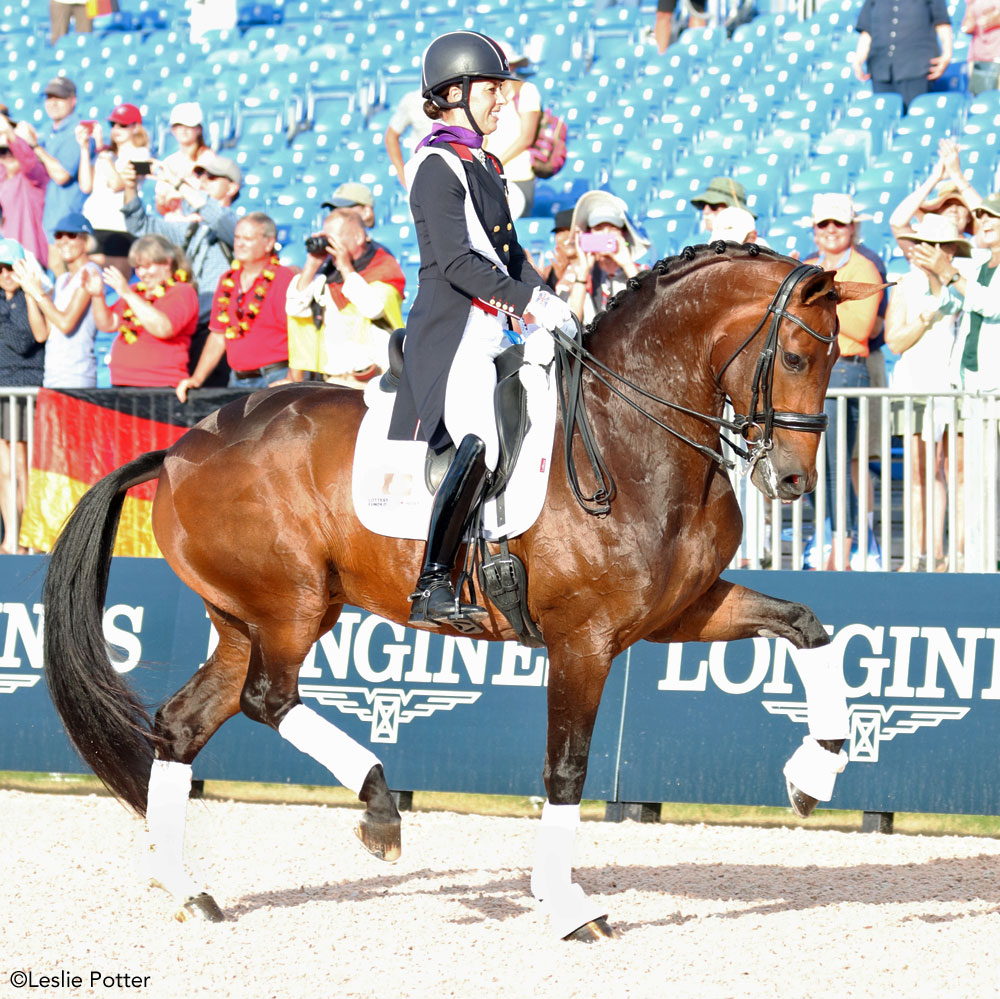 Your WEG Moment of the Day for Thursday, September 13: The German dressage team won gold today, but Charlotte Dujardin, one of the members of the bronze medal team from Great Britain, took her time during the victory lap. To cheers from the crowd, she and her Hanoverian mare, Mount St. John Freestyle, stole the spotlight and showed off their best passage and piaffe.