The sound of hooves can be heard clip-clopping on the narrow cobbled streets of a tiny mountain village. A small horse comes into view, its pale gold coat glowing warmly in the sun. A cart follows behind, filled with happy, laughing children.

This picturesque moment could have taken place 150 years ago in the Tyrolean Alps, or it could be happening there right now. Haflingers have been walking the ancient streets of these Alpine villages for decades, and still graze in the lush mountain pastures that lie beneath the snowy peaks.

The breed is named after the Tyrolean village of Hafling in northern Italy, where ancestors of today’s Haflingers lived during medieval times. These hardy mountain ponies lived in the Alps and helped local farmers survive.

Tough enough to withstand the harsh winters and agile enough to negotiate the winding, narrow mountain paths, farmers also depended on these horses to plow their fields, pull fallen logs and carry them from town to town.

In 1874, a colt named Folie was sired by an Arabian stallion and born to a Tyrolean mare in the Alps. Folie went on to become the foundation sire of the Haflinger breed, and all modern-day Haflingers can be traced back to him.

At the turn of the 20th century, motorized vehicles began to replace horses on farms in many parts of Europe, but not in the Alps. The difficult mountain terrain made tractors impractical, and farmers continued to use their Haflingers to work the land.

When World War I broke out, life changed in Europe. Nearly all resources went toward the war effort, and horses were no exception. Haflingers were sold to the military as pack horses and bred to be more stout.

When the war ended, the region of South Tyrol, which included the town of Hafling, became part of Italy, while North Tyrol stayed with Austria. This created a divide in the Haflinger breed, limiting breeding to horses that were local. The breed suffered during this time, and the Haflinger was nearly lost.

It wasn’t until the early 1930s when a concerted effort was made between breeders in both North and South Tyrol to return the breed to its former quality.

Not long after this attempt to bring the breed back to its original quality, build-up began for another European war. The demand for horses to be used by the military put a strain on the breed, and Haflingers were crossed with other breeds to increase the number of horses available for purchase. The German Armed Forces bought many Haflingers and Haflinger crosses to be used as pack horses in the war.

When World War II ended in the defeat of Germany, the Haflinger breed was in poor shape. Government-run breeding centers were closed down, and some of the best Haflinger stock was lost. In 1946 and 1947, those left who still loved the breed made another attempt to save it and called conferences to create a closed stud book and establish a Tyrolean Haflinger Breeding Association breeding center.

Haflingers came to the United States in 1958 and have made America home. The breed has steadily grown in numbers here, and today the American Haflinger Registry has 15,000 Haflingers registered in the U.S. The breed’s popularity here should come as no surprise since these little horses are not only beautiful, but versatile, too.

Haflingers are currently being ridden around the country in dressage, hunt seat, eventing, reining and gymkhana. They are also a popular horse for driving, and are shown in harness in a variety of classes. Each year, the American Haflinger Registry also holds a national breed show where Haflingers from around the country come to compete in a number of halter and performance classes.

One of the most popular activities to do with Haflingers is trail riding. Because of their hardy, surefooted nature, Haflingers make great trail horses. Not only are they excellent mounts for a casual hack, they are also making a name for themselves in endurance and competitive trail riding.

While it was once unusual to see a Haflinger in the U.S., the breed is becoming more common. With its charming yet fraught history, and its mountain-bred hardiness, it’s easy to see that the Haflinger is here to stay.

This article featuring the Haflinger appeared in the March 2020 issue of Horse Illustrated magazine. Click here to subscribe! 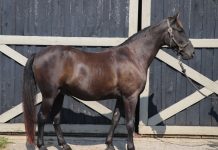 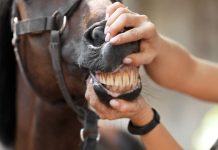 How to Tell a Horse’s Age by His Teeth