When you think of a sanctuary for wild Mustang stallions, you probably don’t picture it nestled in the heart of midwestern farmland. But that’s exactly where 20 old Mustangs from the biggest horse rescue mission in U.S. history found a refuge to live out the remainder of their days in peace as part of the Hallelujah stallion herd.

Many of the horses who served in World Wars I and II were rounded up from what is now known as the Sheldon National Wildlife Refuge on the northern border of Nevada. It became a breeding ground for these “war horses,” most of whom were shipped to Europe, where they were used to pull artillery or carry soldiers into war.

The Sheldon Mustangs who were left after the wars ended remained on the refuge. They were managed by the U.S. Fish and Wildlife Service (FWS), not the Bureau of Land Management, so they didn’t fall under the protection of the Wild Free-Roaming Horse and Burro Act of 1971, which prevents sale for slaughter.

In 2014, the FWS ordered the herd to be “zeroed out” by 2017. Nine hundred and seven of the Mustangs went to a sanctuary in South Dakota, which subsequently failed in 2016.

The horses were discovered to be in bad shape, starving and suffering the effects of the harsh winter environment. The state seized them in a humane case and was planning to sell and/or adopt them to recover the cost of feeding the herd.

This is when Elaine Nash of Fleet of Angels stepped in. Her organization helps arrange transport for horses in need, so she had the network and the passion to help these horses find homes quickly. Nash dubbed it the “Hallelujah Horse Mission,” and put out a call for anyone who would adopt two horses at a time.

When Nancy Turner of This Old Horse (TOH), a sanctuary in Minnesota for aged horses, heard Nash’s appeal, she wanted to help by taking two of the horses.

“My heart started aching,” Turner recalls. “I knew there was nothing I could do—I couldn’t take 900.” Then she started thinking. She told Nash she would take two older mares.

“It’s going to be the older ones,” Turner confirmed. “The arthritic ones. The ones that aren’t able to be retrained.”

“What about blind ones?” asked Nash. “How about stallions? How about seven?”

Turner was never one to back down from helping horses in need.

Turner recounts the day seven horses arrived at This Old Horse in Minnesota.

“When they got here, these wild stallions were going insane in the trailer. I thought, ‘We’re going to have to put them down. We don’t know what we’re doing. This is never going to work.’” She felt like she had made a huge mistake.

But once the hallelujah horse mustangs were off the trailer and reunited, they calmed down. Turner turned to her friend and TOH volunteer Jeanne Klein and said, “I think we did the right thing.”

“What makes you think you had anything to do with this?” Klein replied. “They found their way to where they needed to be.”

Little did Turner know how much these words would ring true in the months to come.

Nash eventually raised enough money to pay off the state of South Dakota and had rehomed 887 of the 907 horses. The Hallelujah Horse Mission became the biggest horse rehoming operation in U.S. history.

By May of 2018, the herd was down to 20 bonded senior stallions. Some of them were blind, and the herd had come to depend on each other, so they needed to find a home together. Nash had moved them out of South Dakota to Colorado, where they had a temporary home at a rough stock facility.

This last remnant of the Hallelujah Horse Mustangs had to find a home by the end of the year, or they would be euthanized.

Turner was still following their story.

“How do you work so hard to save 887 horses and you can’t cut in the last 20?” she wondered. So she made it her personal mission to raise funds and find a place where a sanctuary could be built for them. She sent an email to her leadership team expressing her sorrow at these horses’ fate.

“It’s not our responsibility, but it weighs on my heart.”

That’s when Becky Robb Hotzler, a volunteer and part of the TOH leadership team had an idea.

“My sister has a farm in Goodhue [Minn.],” said Hotzler. “They have 50 acres. It’s not set up for horses, but maybe they would be open to it.”

Her sister and brother-in-law, Ricka and Josh Kohnstamm, weren’t sure how this idea would be received by neighboring farm owners.

“They really wanted the buy-in of the community,” Turner recalls. “They wanted to do what was right.”

The Kohnstamms decided to hold an open house for their neighbors to get feedback and address any concerns they might have. After the meeting, Turner expected the Kohnstamms to need time to think about it, but instead, they said, “I think we’re good!”

“I cried like a cartoon character—tears were streaming off of my face,” says Turner. “We were going to save them. I couldn’t believe it!”

It took a few months to put up fencing, shelters, and waterers and arrange transportation. When the herd arrived, they separated the sighted horses from the blind ones, and they all ran the fence in a panic. The gate had to be quickly opened between the two groups, and the horses all settled down. This was one herd, and they needed to be together.

“When I think about all of my horses and the horses I’ve loved, this is where I’d like them to end up,” she says. “I love the idea of giving back after a lifetime of enjoying horses.”

“They are pretty easy to take care of,” Turner says. “You just feed them. They receive minimal vet care, and we intervene only in emergency situations.” The horses have rocky
dry creeks to walk over to get to water that keeps their feet from getting too long.

These Hallelujah Horse Mustangs will live out their life at Wells Creek, and the herd won’t be added to. When they’ve all passed on, TOH may look at turning it into some other kind of sanctuary, but this is their home as long as they are alive.

“It’s truly a sanctuary in every way,” says Turner. “We worked really hard through this whole process. It’s such a privilege they ended up with us.”

The Kohnstamms donated their land, and other donors helped set up the infrastructure and paid for transportation from Colo., but the monthly cost of feeding the Mustangs is significant, so they set up an “Adopt a Mustang” sponsorship program to help offset the cost of their care. Hay is $5,500 every month and a half. If you are interested in sponsoring one of these stallions, visit www.thisoldhorse.org/wells-creek-detail.

This article about Hallelujah Horse Mustangs appeared in the April 2021 issue of Horse Illustrated magazine. Click here to subscribe! 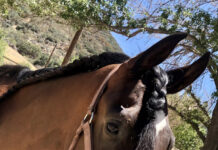 How to Get More Speed on Your Barrel Racing Pattern