It started with horse book illustrator, Jean Abernethy in the year 2000. A bay horse with a blaze started life with a sense of humor. His eyes were different than any other horse; they were too big for his face, contributing to his goofiness. His heart was in the right place, but he liked to spook first and think later. But he has become a horse to be reckoned with through his various adventures with his friends.

Meet Fergus, the famous cartoon horse with more than 300,000 Facebook followers and 30,000 Instagram followers. He has graced the pages of multiple equine magazines and five books.

Before the Days of Fergus

His creator is none other than Jean Abernethy, one of the leading horse book illustrators in the equine industry.

Since her first cartoon was published in 1981, Abernethy has gone on to become a household name in the horse world and win coveted awards.

In 2019, American Horse Publications presented Abernethy with first- and second-place Equine Media Awards for her editorial illustrations published in Young Rider. In 2018, the Western Writers of America presented her with a Spur Award for her third book, Fergus and the Greener Grass.

Abernethy says she feels very blessed to have her dream job as a horse book illustrator.

“A horse magazine was a real treasure when I was a kid, and now my work is showing up in them,” she says. “The horse industry has kept me steadily working, and I’m very grateful for that. It’s a real privilege to be able to work at something you’re passionate about.”

Abernethy calls horses her rudder. She currently owns an Arabian/Quarter Horse-cross named Willow. She and her trusty buckskin have spent seven summers working as trail guides for South Algonquin Trails, a trail riding outfit on the edge of Algonquin Provincial Park near Harcourt, Ontario. Abernethy has also worked as a barn hand and carriage driver, and she enjoys saddle-making as a hobby.

Prior to majoring in illustration at Ontario College of Art and Design University, the Ontario native attended Humber College in West Toronto for its Equine Studies program. There she learned fundamental riding skills.

“My time in the Humber program introduced me to the professional horse world,” she says.

One of the biggest changes in her career has been learning to work with computer graphics.

“I graduated from art college in 1987 and hadn’t touched a computer,” she says. “I had no interest in it. Everything was brushes and inks and watercolors. The shift to working digitally started in about 2008. It was a very slow and frustrating learning curve, but that changed the look of my artwork. I discovered I could make perfectly straight lines, and I could change color tones instantly using the graphics programs. It just doesn’t look like what you can do with a pen.”

The Birth of Fergus

She says readers instigated the creation of her singular character when they kept thinking her generic characters were the same horse.

“I would just habitually make these ridiculous-looking eyes on the front of a horse’s face, because, of course, a horse’s eyes don’t touch in the middle, so making the eyes that way just seemed to make it extra funny,” says the lifelong horsewoman. “I could get a lot of expression out of those eyes.”

People started asking Abernethy what the horse’s name was frequently enough that Fergus was eventually born.

In 2012, she decided to digitally colorize her former black-and-white newspaper comic strips of Fergus and introduce him on Facebook. He quickly became an internet sensation.

Trafalgar Square Books has published all five Fergus books, including the latest, It’s Been 20 Years Fergus (and you’re still spooking at that thing?), available at horseandriderbooks.com.

Jean Abernethy says the best part of her job is choosing her own hours.

“It would be heartbreaking to give all the hours of my days to a boss in a building someplace,” she says with a laugh. “That would not be fun. It’s not easy, but I do love being self-employed.”

After 40 years as an illustrator, Abernethy considers her biggest accomplishment to be that she is still doing it after all these years. 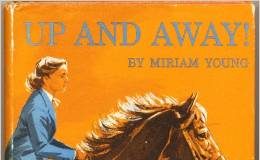 More Forgotten Favorites: Horse Books You May Have Missed