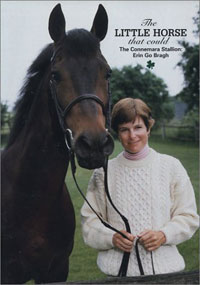 You don’t need the luck o’ the Irish to appreciate the talent, athleticism, and overall appeal of Ireland’s superlative Connemara Pony. But are you familiar with some of the most famous Connemaras? Here are a handful of legendary ponies that have galloped their way into history:

Hideaway Farm’s talented stallion Erin Go Bragh was undoubtedly one of the most well-known Connemaras in recent history. Despite his size—about 15.2hh—he was an immensely successful eventer, and in a competitive career that spanned more than a decade, Erin Go Bragh represented the Connemara breed in driving as well as eventing. In addition to competing successfully at Advanced level, he also sired more than 200 foals, had a starring role in the children’s documentary The Little Horse That Could, and received the honor of being named Breyer Horse of the Year in 1988. Erin Go Bragh passed away in 2013 but his descendants continue his legacy of athletic success.

The Connemara cross-bred Stroller might not have been very big—he stood just 14.1 hands—but that didn’t stop him from competing with great success against much larger horses as a show jumper. Ridden throughout his career by Marion Coakes, the diminutive gelding won the silver medal in the individual competition at the 1968 Mexico City Olympic Games, in addition to triumphing in 61 other international competitions. Retired at the age of 21, Stroller lived to the ripe old age of 36.

The legendary Connemara gelding Nugget, renowned for his remarkable athleticism and skill at jumping, accomplished remarkable feats at an age when most ponies are ready to relax in a pasture. At the age of 22 in 1935, Nugget successfully cleared 7’2”, which was a world record at the time. Defying his age, Nugget continued to compete with success and ultimately won more than 300 prizes, stamping himself as a legendary member of his breed.

Connemara fans—here’s your chance! Share YOUR favorite famous Connemaras in the comments.