There’s no mistaking an Appaloosa when you see one; the spots they sport stand out in an amazingly colorful way. Riders in almost every discipline cherish the Appaloosa for not only its captivating look, but also its all-around athletic ability.

There are six coat patterns recognized by the Appaloosa Horse Club (ApHC), but with so many possible combinations of spots and roaning, it’s sometimes hard to put a horse into just one category. That’s what makes the Appaloosa unique! 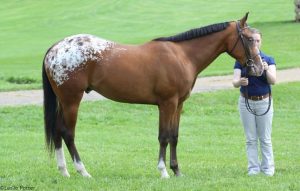 One of the most striking patterns is the leopard coat. Leopard Appaloosas are the Dalmatians of the horse world; they have white coats covered with dark-colored spots from head to tail. A more subtle version of the spotted coat might be a dark horse with white spots on his hips.

The blanket and blanket with spots patterns are the ones people most commonly associate with Appaloosa horses. These patterns feature a white “blanket” that covers the horse’s hindquarters (which can also extend to the horse’s midsection and toward the neck); sometimes there are dark base-color spots within the blanket. A plain blanket that does not include spots is sometimes referred to as the “snowcap” pattern.

Many Appaloosas have roan patterns. These vary widely in looks. A roan Appaloosa may have an extensively roan coat along with mottled skin and spotted coat characteristics, or may have just a few patches of roaning.

There are some Appaloosas that have no spots or roaning at all. This may seem contradictory, but an Appaloosa can be solid-colored. In order to receive regular ApHC registration, a horse must have a recognizable coat pattern or mottled skin and at least one other characteristic (white sclera or striped hooves). 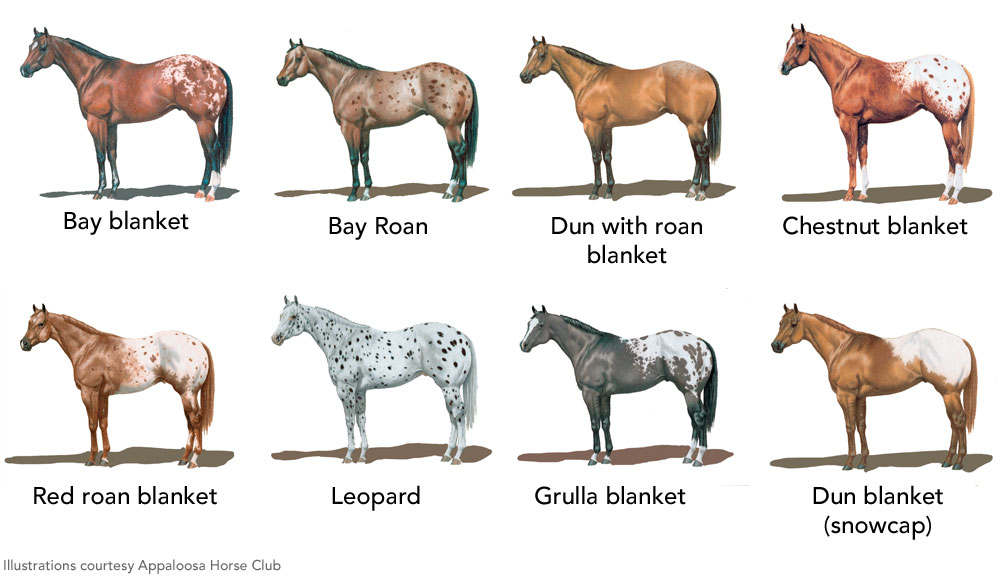 It’s All in the Genes

The spots and roaning found in Appaloosas are controlled by the dominant Lp gene. A horse with one copy of the gene (Lplp) can express any coat pattern from solid to leopard, and a horse with two copies of the gene (LpLp) often has a few-spot or snowcap pattern.

Appaloosa coat patterns are modifying patterns, just like gray and true roan; these “modify” the base coat. In all of these cases, the horse has a base color. In the case of an Appaloosa, this can be black, bay, chestnut, dark bay/brown, palomino, dun, black, cremello/perlino, buckskin or grulla. The Appaloosa Horse Club also recognizes gray, bay roan, blue roan, and red roan as base colors.

For example, a chestnut horse with a gray gene that ultimately turns gray is still a chestnut horse “underneath.” A true chestnut roan horse has a chestnut base color modified by a roan gene.
In the case of an Appaloosa, the chestnut base coat could be modified by a blanket, a blanket with spots, or any of the other Appaloosa patterns. Complicating matters is the occasional presence of a gray gene, which modifies the Appaloosa modifying pattern, ultimately eliminating the Appaloosa pattern as the horse turns gray.

One of the fascinating things about Appaloosas is that they are truly the only leopards that can change their spots. Their coat patterns don’t always stay the same as the horse ages; they tend to evolve over time. For example, Appaloosas with the varnish roan coat pattern are not typically born looking like roans; they’re born with spots. As the foal grows older, those spots gradually turn into patches of varnish roan.

Sometimes the coat pattern of an Appaloosa can change so much that the horse may need to have his registration papers updated if his new coat pattern doesn’t match the original description.