In honor of the American Paint Horse Association’s 50th anniversary in 2012, HorseChannel.com is featuring some famous horses from the breed’s history.

Colonels Smokingun, better known as “Gunner,” joined rarified company in 2007 when he became a National Reining Norse Association (NRHA) Million Dollar Sire—the first Paint to accomplish this feat. A cropout son of Katie Gun AQHA and stallion Colonelfourfreckle AQHA, Gunner sported a white face and too much leg white to qualify for AQHA registration at the time. That turned out to be fortuitous for the Paint breed. As a 3-year-old in 1996, he dazzled in both APHA and NRHA reining arenas, and then made more history in 2001, when he and owner Tim McQuay won the United States Equestrian Team (USET) Open Reining Championship. Ultimately he earned more than $170,000 in NRHA competition, making him the highest-earning Paint in NRHA history. He became only the eighth horse to reach the NRHA Two-Million Dollar sire mark in 2010. 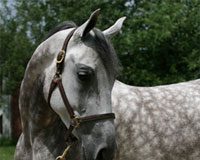