In honor of the American Paint Horse Association’s 50th anniversary in 2012, HorseChannel.com is featuring some famous horses from the breed’s history.

The first registered gelding was a 1957 chestnut overo named Wahoo King, who began his career as a top roping horse. Campaigned at halter by Junior Robertson, one of APSHA’s founding members, the striking gelding attracted a legion of fans to the new association. 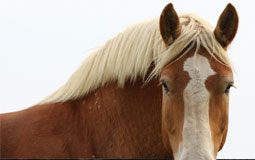