Home Horse Breeds Are You Ready for Some Clydesdales?

It’s almost time for the Super Bowl, the biggest event in football that draws two types of spectators: those who actually enjoy watching the game, and those who watch just for the commercials (or, nowadays, those who DVR the game and then fast-forward through it to get to the commercials). For us horse lovers, whether we enjoy the game or not, we all get excited for the annual Anheuser-Busch ad featuring the Budweiser Clydesdales. 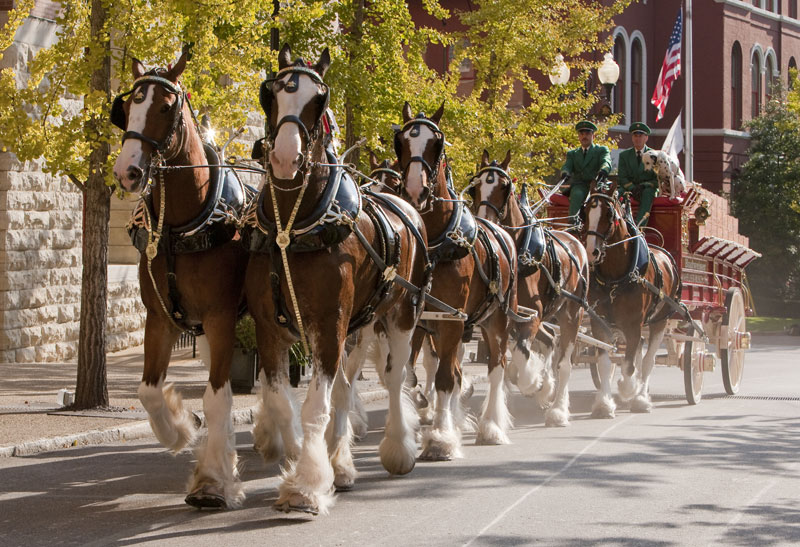 The real Budweiser hitches are used in the Super Bowl ads.

Super Bowl Stars
You won’t see any equine actors playing the parts of the Budweiser Clydesdales. Only the real deal will do.

“[If they need the hitch], we use the actual hitch that is out performing day in and day out in front of the public,” says Doug Bousselot, lead driver for the West Coast Budweiser hitch based in Fort Collins, Colo. “If it’s going to be a specific trick, like bumping the tree for the snowball fight commercial or rolling snowballs, we use spare horses that are not on the hitch. Then we use younger ones for the foals.

“We’ll send a group of horses into training, and that way there will be several of them that know every role,” continues Bousselot. “They’ll have more time to dedicate to training. They might work 15 to 30 minutes at a time and do that four times a day. If it was a hitch horse, we might have a show we’re doing; by the time we wash them up and get them prepared for the show and then do the show, we wouldn’t be able to do [commercial training] in a day.”

The skills the horses need to know vary from year to year depending on what the plot of the commercial is. “Some of the foals they taught to paw at a volleyball, and that’s how we taught them to do the snowball fight; [the ball is] what they learned to roll with their nose,” says Bousselot.

The horses are in training for no less than a month, but the length of time can change based on how many horses are needed, and what and how many skills they need to learn. “If it was a group of six and they had some simple stuff to do, they might work three or four weeks,” says Bousselot. “When we did the original football commercial, there were 22 head of horses, so they had them in training for six weeks and then had two weeks of filming.”

Many of the commercials are filmed in three days. Care is taken to make sure all of the horses get plenty of rest in between their scenes.

“Some of the shooting for what we call the loose or ‘hero’ horses, the ones that have the individual skills, will be in the morning, and then the hitches will be in the afternoon, or vice versa,” says Bousselot. “We try to break it up so that while the single horses are out, the hitch horses are back in the barn resting. The crew might put in a longer day, but the horses will work only about 45 minutes. A lot of it is sitting around waiting for the repositioning of the cameras, so one of the big things that goes into teaching the horses is patience. The actual work is not that much; it’s just time-consuming getting it done.”

Bousselot emphasizes that the Clydesdales do all of their own tricks. “Everybody thinks the commercials are digitally made,” he says. “Everything you see in our commercials, these horses have been trained to do, whether it’s kicking the ball or carrying a stick. It’s not computer-generated.” 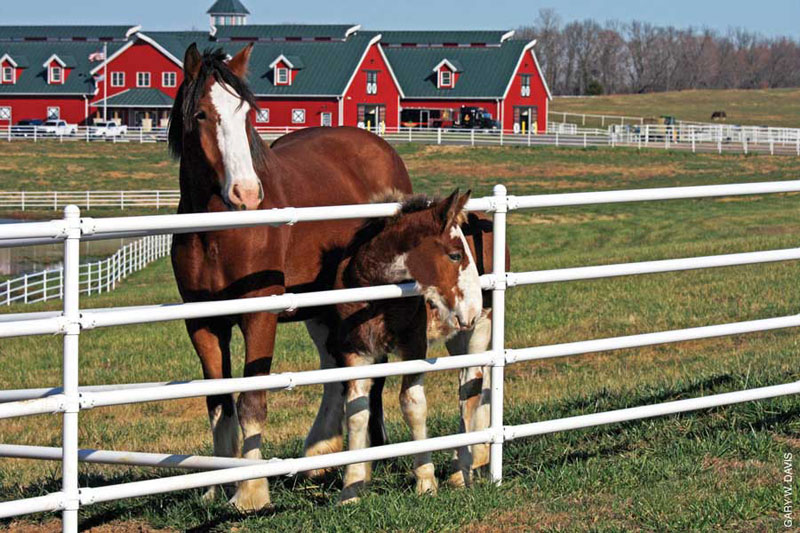 About 30 to 40 Clydesdale foals are born at Warm Spring Ranch each year.

“The hitch is probably on the road anywhere from 300 to 320 days a year, but that being said, a hitch consists of 10 head of horses,” says Bousselot. “We hook eight and have two that get the day off. If I show five days in a row, I rotate two different horses every day. I also have access to [the horses in] St. Louis. They usually have five or six horses on hand for us, so if any horses need a break, they’ll come out. Most of the horses will do maybe half a year out on the road.”

Besides the West Coast hitch, Anheuser-Busch has an East Coast hitch in Merrimack, N.H., and a Midwest hitch in St. Louis, Mo., located at the original brewery. The horses are born at Warm Springs Ranch in Booneville, Mo., then move to Grant’s Farm in St. Louis, part of the original Busch family estate. “They get handled there as yearlings and 2-year-olds and work on their manners,” says Bousselot. “Then they go out to the training facility in New Hampshire.”

At the Merrimack, N.H., farm, the Clydesdales (all around the age of 3) begin their hitch training, starting in pairs and gradually working up to the eight-horse hitch.

“Once we get them out on the road, we pair them up with an older horse and let them ease into the job,” says Bousselot, who adds that horses don’t go out on the road until they’re at least 4 years old.

In addition to hitch work, training focuses on teaching the horses to stand still until they’re asked to move, and introducing them to loud noises, traffic and people. Learning to work together is important too.

“One of the things we do is mix them up with different horses so they learn to work not just with the same horse in the same position,” says Bousselot. “When they’re young, they have to learn that if they’re pulling together, life is easier, and that’s where the older horse comes in.”

Out on the road, the hitches do a lot of parade-type work. If they’re attending an event in an equestrian arena, though, they can show off some pretty slick moves. “We’ll do a figure-eight pattern to show how the horses can move with the wagon, and we’ll do what we call our docking procedure,” says Bousselot. “We’ll show how the horses can sidepass 180 degrees and then put the wagon 90 degrees to the wall like they were docking in the old days. Then we’ll swing them all the way back without the wagon moving, like if they had to clear [the way] for more horses coming in with another wagon.

“To show people how agilely these guys can drive, we usually do a number called spin the top,” adds Bousselot. “We kind of wrap the horses around the wagon in a semi-circle going to the left. The ideal situation is the left rear wheel of the wagon will just sit there, and the wagon, which has a fifth wheel under it like a semi, will just spin completely around itself. It shows how the horses can work together and how the wagon functions.”

The Selection Process
Not just any horse born at Warm Springs Ranch gets to grow up to be a Budweiser Clydesdale. The hitch horses need to have a certain look, size and temperament.”They have to be geldings; it’s just easier all the way around,” says Bousselot.”They’re bay in color with a white blaze on the forehead and four white feet because we want them to match up aesthetically. We also want them to be 18 hands tall and weigh around 2,000 pounds. The biggest thing is they have to have the right temperament and disposition to come out on the road.”

Despite their imposing size, Bousselot says the Clydesdales are very gentle and eager to please.

“With some of the [Super Bowl] commercials we’ve done, when they learn to do some of the different tricks, it’s almost like having a Lab that wants to please you the whole time; they want to do the tricks,” he says. “Even after we’ve done the commercial—it might be a couple of years later—once in a while when they see one of us that has trained with them, they might do a bow or a head shake. It’s like they’re saying, ‘Hey, guys, look at this. I remember how to do it.’”

Healthy as a Horse
To keep the Clydesdales happy and healthy while they’re on the road, shooting a commercial or greeting the public at home, each horse is fed a diet perfectly tuned to his individual needs. Purina works closely with the teams in charge of the horses to ensure that all of the Clydesdales’ nutrition requirements are being met. 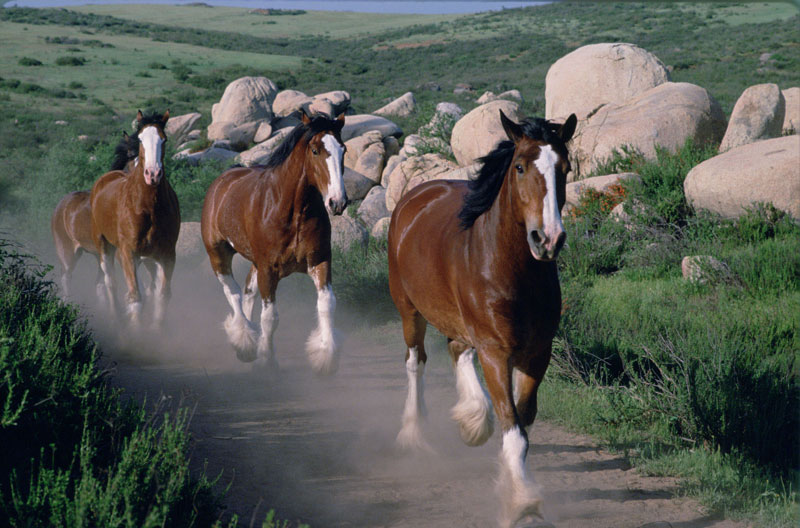 Most of the Clydesdales are easy keepers and eat 2 to 3 pounds of ration balancer a day in addition to their hay. Some harder keepers eat up to 14 pounds of grain a day.

“We’ve been working with them for about the past year and a half feeding their horses,” says Katie Young, Ph.D., manager of equine nutritional services for Purina Animal Nutrition. “There’s not a lot of research on feeding and growth studies in draft horses, so we’ve been collecting data on their young, growing horses.”

Like any sound equine diet, the Clydesdales’ meal plans start with good-quality forage. Remaining calorie and nutrient needs are met with a Purina feed.

Young says many of the horses are easy keepers and get 2 to 3 pounds of Purina Enrich Plus ration balancer a day along with their hay. “The horses that need more calories will be on Omolene #500 or #100, and then as needed we supplement with Amplify, which is our high-fat supplement,” she says. “It’s really about determining what’s the best feeding program for each individual horse. We’ve got a few harder keepers that are getting up to 14 pounds of Omolene a day.”

Purina supplies all three Budweiser hitches and Grant’s Farm, where the young horses and some of the retired Clydesdales reside.

Each of the Budweiser hitches is based out of a brewery that’s open to the public. You can also visit the horses at Grant’s Farm and Warm Springs Ranch. Visit these sites for more information: