The Friesian is one of Europe’s oldest breeds and gets its name from the Friesland region in the Netherlands. The breed originated during the Middle Ages, even as far back as the 4th century. 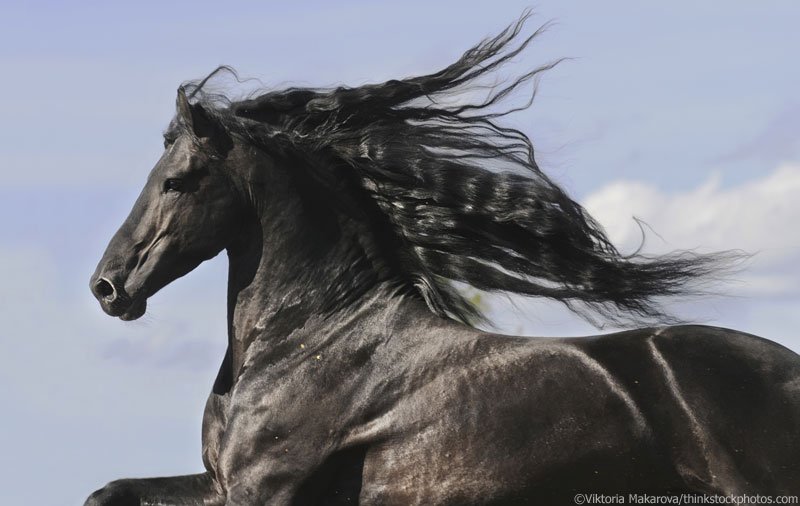 “The Friesian exemplifies strength and has an intense presence and beauty that can certainly be described as extravagant and highly ornate, just like the Baroque period,” says MaryAnne Girard, executive secretary of the Friesian Horse Society in Plattsmouth, Neb.

“The Friesian’s personality as an easy-going, well-tempered horse also displays the characteristics of a Baroque horse,” adds Jason Tice, executive director of the Friesian Horse Association of North America in Lexington, Ky.

The breed’s strength, stamina and maneuverability made it the perfect mount for medieval knights. Its flashy, high-stepping trot also made it a favored carriage horse for European royalty.

Friesians almost became extinct worldwide during the turn of the 20th century, as many of them were crossed to other breeds to create a faster horse for trotting races. In fact, only three purebred stallions were left by 1907. However, while World War II very nearly destroyed other breeds, it brought the Friesian back from the brink of extinction when Dutch farmers turned to horses for transportation and fieldwork because of fuel shortages.

The Friesian was first imported to North America in the 17th century, but due to crossbreeding, it disappeared. In 1974, the breed was re-introduced in the United States. The Friesian is still considered rare in North America, but its numbers are growing because of the demand for these romantic horses.