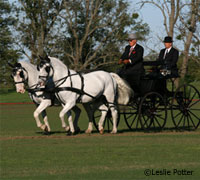 The Lipizzan was first bred in the 16th century by the Habsburg Empire that ruled Spain and Austria. The Habsburg rulers wanted to create a beautiful and trainable cavalry mount, so the Habsburg emperor, Maximillian II, brought several Iberian horses to Kladrub (now in the Czech Republic) in 1562. His brother, Archduke Charles II, set up another stud at Lipizza (now in Slovenia) near the Adriatic Sea in 1580. This location became the breed’s namesake. The Iberian horses from both studs were crossed with native Karst horses and other breeds from Europe, such as the Neapolitan Horse. “The trainability and performance characteristics [of these horses] were prized by the Habsburg monarchy, who owned, bred and controlled the evolution of the Lipizzan,” says Sandy Heaberlin, spokesperson for the Lipizzan Association of North America.

The stallion lines that continue today are Pluto, Conversano, Maestoso, Favory, Neapolitano and Siglavy. Two other lines recognized in Eastern European countries and in North America are Tulipan and Incitato.
The stud at Kladrub was responsible for creating heavy carriage horses, while Lipizza created fine riding and carriage horses.

“The Lipizzan is a classic Baroque type, with a convex profile and broad, deep quarters with relatively low-set hocks,” says Judith Tarr, spokesperson for the United States Lipizzan Registry in Salem, Ore.

Lipizzans have a long-standing association with the art of classical horsemanship, which was practiced and enjoyed by nobility in the Baroque period. One of the cornerstones of this tradition is the Spanish Riding School of Vienna, established in Vienna, Austria, in 1735 by Charles VI, Holy Roman Emperor. The school’s performances today carry on the tradition of showcasing highly trained Lipizzan stallions.

Between 1958 and 1959, Tempel and Esther Smith imported three stallions and 13 mares from Austria, Hungary and Yugoslavia, the largest herd to come to the United States. Tempel Farms, located in Old Mill Creek, Ill., continues to breed Lipizzans and hold classical dressage exhibitions.