The Dales is a native of the upper dales (valleys) in the eastern slopes of northern England’s Pennine Range, spanning from Derbyshire to the Scottish border. Small Dales herds can still be found on the upper dales of the rivers Tyne, Wear, Allen, Tees and Swale.

The Dales is descended from the ancient Pennine pony, as well as the extinct Scottish Galloway. Small but strong, Dales Ponies hauled lead out of mines from the Roman occupation of England until the mid-19th century. Later, breeders added the Norfolk Trotter, Yorkshire Roadster and Welsh Pony to the Dales to give it a little more substance and speed for harness work. Dales Ponies were able to carry heavy loads without tiring for up to 200 miles in one week. They were also put to work on small farms throughout the region.

However, the Dales’ utility led to its near extinction, according to Denise Dunkley, co-founder and director of the Dales Pony Association of North America. “For its size, the Dales could out-pull larger draft horses, and therefore, the military could squeeze more Dales into ferries to transport them to pull battlefield munitions in World War I,” she says. “So they were conscripted—taken without payment—to help with the war effort. After the war, they were left behind to an uncertain fate.” However, there were still ponies left at home, and in 1964, ardent breeders got together to bring the Dales back.

The Dales is used in both riding and driving. It stands 14 hands and is usually black or dark brown, although occasionally bay, gray or even roan horses are found. 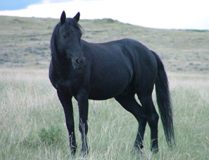