Standing taller than most NBA players and each weighing more than one ton, Belgian draft horses Big Jake and Almighty Bruce make up quite a large team.

At 20 hands, 2.75 inches (6’10” at the withers), Big Jake’s claim to fame is his Guinness Book of World Records title as the tallest living horse. The 14-year-old draft horse, residing at Smokey Hollow Farm near Poynette, Wis., weighs around 2,600 pounds and is owned by Jerry Gilbert and his family. Though Almighty Bruce stands a hair shorter than the record holder (20 hands, 1.5 inches), Jake’s long-time barn buddy outweighs him by 250 pounds.

While not all draft horses achieve the impressive size of Gilbert’s Belgians, most of these heavy breeds do need bigger digs, and they can rack up some hefty bills as far as tack, maintenance and feeding goes. But when owning a big horse, there’s a lot more horse to love.

Your average 15-hand, 1,000-pound horse may be comfortable in a 12’x12′ stall. The bigger the horse, however, the bigger the stall he needs. Stalls for big drafts like Jake and Bruce need to be twice as large as the standard. Gilbert says he keeps his drafts in 20’x20′ stalls.

Each of Gilbert’s stalls is equipped with a 25-gallon water tank. The average horse consumes 5 to 10 gallons of water each day, so a horse that is twice as big will drink about twice as much.

Though he has larger stalls and two of the tallest living horses in the world, Gilbert says he hasn’t had to change his fence height. Your typical 5-foot fence should hold in draft horses, but due to their size, draft horses can be more destructive than smaller equines. Having fences with a top rail (if made of small-mesh wire) will allow for visibility, and an electric tape or wire near the top will deter your draft from pushing through.

Even your trailer must be tailored to fit a draft horse. Standard trailers are designed to safely accommodate horses up to 16.3-hand horses, with 10′ stall length, 7′ or 7’6″ interior height and a 6′ width. For smaller or shorter draft horses, standard trailers may suffice. But for bigger, taller horses, you will need to purchase an extra-large or even custom-size trailer.

A bigger horse means double the manure … and more work for you. A 1,000-pound horse will defecate approximately four to 13 times each day and produce approximately 9 tons of manure per year, according to eXtension: America’s research-based learning network. The average horse can produce 50 pounds of waste per day. If you stall your horse for most of the day, soiled bedding can equal almost twice the volume of the manure. Annual stall waste from one average-sized horse will fill a 12×12 stall about 6 feet deep. Just think if you added another 1,000 pounds of horse to that equation!

Cleanup isn’t the only maintenance work that will double with larger horses. Grooming can also take twice as long and will often require a step stool to reach all areas of the horse.

Keep in mind, a bigger horse means a bigger bill. Tack and equipment for any horse can be expensive, especially when there are not too many “Big & Tall” outlets around. When shopping for his horses, Gilbert says he generally places custom orders. While he can occasionally find what he’s looking for at draft shows, not many tack stores stock up on big inventory because there are not as many buyers. Most tack shops will carry blankets anywhere from 58 to 84 inches, but you’ll be hard-pressed to find one on the shelf measuring 110. Be prepared to spend the money for custom-sized halters, blankets, tack and other fittings.

A 2012 estimate by the University of Maine calculated the average annual cost of owning a light-breed horse is $3,876, considering maintenance costs of feed, veterinary and farrier services, bedding, training and upkeep of buildings and pasture—and that’s just for an average-sized horse. Draft sizing may up the bill in some cases, but professional care on a regular schedule is essential for heading off bigger problems down the road.

It’s important to find the right veterinarian when getting into draft horses. Gilbert entrusts his high-performance pulling and driving draft horses to veterinarians Pat Griffin, DVM, Ph.D., DACT, and Howard Ketover, DVM, at Irongate Equine Clinic of Madison, Wis. Griffin and his colleagues have extensive experience working on draft horses.

Though health care maintenance for draft horses is not much different than it is for light-breed horses, Griffin says performing some general procedures can be slightly more interesting. “It always is a little more nerve-wracking for us because of their size,” he says. “But we use the same equipment. We tailor the anesthetic protocol because they’re actually easier to sedate. Laying them down is a little more difficult, though, because of their size. Recovery is the same, except you’re dealing with a 2,000-pound animal versus a 1,000-pound animal getting up.”

For the feet, problems caused by improper management are quite common. “The hoof [problems seen in drafts] are the biggest issue in terms of adequate care,” says Griffin. “Part of it is because of their size and finding a farrier that is comfortable and experienced with draft horse trimming and shoeing.”

Griffin says abscesses are a frequent result of poor foot care. Drafts are also more prone to laminitis and founder than some of the light breeds due to their size, and it is generally caused by improper feeding programs.

Despite their size, draft horses are considered easy keepers. You might think they need a lot of feed, but they don’t, says Dan Burke, Ph.D., director of Tribute Equine Nutrition at Kalmbach Feeds, Inc.

Draft horses, just like any other type of horse, have different caloric needs depending on their individual metabolism and level of activity. But even the Budweiser Clydesdales sometimes don’t require as many calories per day as one might think. Those that are very easy keepers don’t require additional calories beyond what is provided by good-quality hay, says Katie Young, Ph.D. Young manages equine technical services for Purina Animal Nutrition, which is the official feed supplier for all three Budweiser Clydesdale hitches as well as Grant’s Farm, where young stock and retired horses reside.

“Easy keepers are maintained very well with 2 pounds of ration balancer per day to provide essential protein, vitamins and minerals that are typically lacking in forages, without adding unneeded calories,” says Young.

As with any horse, Young points out that the goal is to consider the amount and quality of forage they eat, factor in the individual metabolic needs (easy, average or hard keeper), lifestyle, and workload to design the appropriate diet.
Horses doing less work generally need fewer calories. A horse should consume 2 to 2.5 percent of his body weight per day total in hay and concentrate, with 85 and 95 percent being hay. For a draft horse that weighs 2,000 pounds, 2 percent of his body weight is 40 pounds, so 30 to 35 pounds of hay. That’s roughly a bale per day, paired with 5 to 10 pounds of grain, depending on how much work the horse is doing.

According to Burke, draft horses are very prone to developing metabolic syndrome, which is similar to type II diabetes in humans. They’re sensitive to high sugar/starch diets, which also makes them more prone to founder. Fat deposits can indicate too many calories.

Three places to check for fat deposits are on the crest of the neck, the tail head, and behind the shoulder blade. Fat deposits in these areas are often signs of metabolic syndrome. 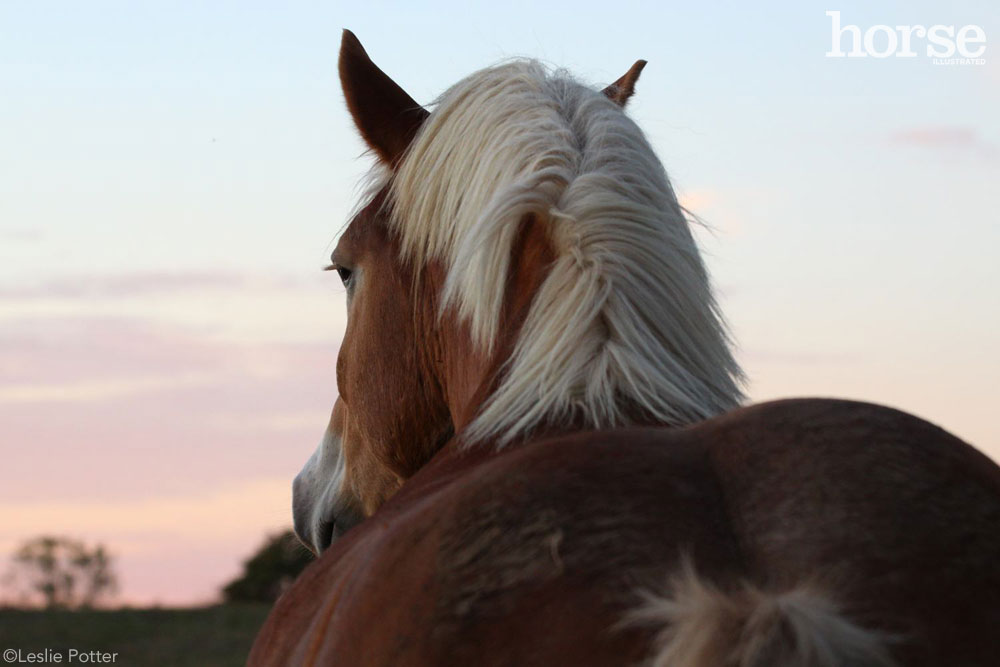 For Gilbert, draft horse ownership runs in the family. “I’ve been around draft horses my whole life,” he says. “That’s how it is for most draft owners.”

If you’re thinking about owning a heavy horse, it’s not a decision that should be made lightly. Gilbert suggests interested owners should research draft horses, spend time around them and talk to draft horse handlers and professionals before purchasing one of these large breeds. “You really have to educate yourself,” he says. “That goes with purchasing any horse.”

Even if drafting one of these giants for your team is just a fantasy, it’s still fun to think big.