The Fell evolved in northern England’s fells, the hills surrounding the Lake District in Cumbria. The weather, with its rainy summers and long, cold winters, fostered the development of ponies that could thrive under such challenging conditions.

The Fell Pony is often mistakenly referred to as a ‘“miniature Friesian,” but while the pony may share some similar outward characteristics, the Friesian was not a major contributor in the Fell’s history.

The now-extinct Scottish Galloway was very similar to the Fell Pony and may even have been absorbed into the native Fell Pony stock. It can be confusing to separate the early history of the two, as “galloway” was the old name given to any draft type of pony.

Although the ponies had been used as pack animals since the 11th century, farmers in Cumbria eventually needed a utility animal to work the hilly landscape. The larger draft horses weren’t suited for sloping plots, but since Fell Ponies developed in a hilly environment, they had no problems with the terrain. The ponies were also used to pack coal out of the hills during the Industrial Revolution. Today, Queen Elizabeth II is a major fan and breeder of the Fell and is a patron of the Fell Pony Society in the United Kingdom.

The Fell retains many of the unique characteristics of its Forest Pony ancestor. The thick forelock, mane and feathers help shed water away from the skin, and the large hooves historically helped prevent the pony from sinking into the soft ground of the fells.

The breed is used for driving and riding. It stands 12.2 to 13.3 hands, and the most common color is black, although brown, bay and gray are also seen. 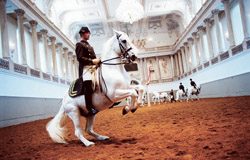