After foaling, the umbilical cord ideally will break at the right time, but may also break too soon, or not break at all. If the cord breaks too soon, there is little you can do. If, however, the umbilicus does not break when the mare stands, you must break it.

Wrap your hand around the cord and grasp it firmly (don’t squeeze it). If blood is still flowing through, you’ll feel a pulsation. Wait. Once the pulse subsides, it is safe to break it. A short distance from the foal’s abdomen, you will see a slight narrowing. Grasp it firmly on both sides of this narrowed area and pull. The cord should separate readily; if it doesn’t, your veterinarian will be able to do the job.

When the umbilicus breaks, the stump must be treated with iodine. Fill a 6 cc syringe case with 7 percent iodine and invert it over the stump. This will cauterize the site and prevent potential infection.

Now your foal must get up. With a normal pregnancy and normal delivery, this should take an hour or less. If by an hour the foal hasn’t been able to make it up, try to help it. Occasionally you must physically pick the foal up and balance it. The best way to do this is to cradle the foal between its chest and rump, but if it refuses to stay up or can’t be lifted, you have a problem. The foal must nurse, and if it can’t it may run into the next potential difficulty.

Assuming that the foal is up (either by itself or with help), it will want to eat. Some foals go right to the nipple, but many will attempt to nurse everything but the right thing – the mare’s elbows or hocks, the wall, the feed bucket, even you. You can guide such a foal to the nipple, place it in the youngster’s mouth, squeeze a little milk for the foal to taste, and it will shake its head, spit it out, and wobble over and try to nurse the door.

If this persists, or if your foal is having trouble standing, your vet will need to milk some colostrum out of the mare and feed it to the foal by passing a stomach tube. The youngster must have the colostrum, which contains important antibodies that will protect the young animal from infection.

A newborn foal’s rectum contains hard, marble-sized fecal matter called meconium. If you see your foal straining at any time, or you have not observed a bowel movement within six hours, administer an enema. It’s a good idea to buy a couple of commercial human enemas before the foal is due. A phosphate enema is preferable to a mineral oil enema because it is considerably less messy.

The morning following delivery, turn mare and foal out by themselves in a small paddock. Exercise is important for both. If the weather is nice, they can stay out all day. If the weather is really rotten, allow them to move around the barn aisle.

A fairly common problem seen at birth or shortly thereafter is entropion (the inversion of one or both lower eyelids). If not corrected, the inverted eyelid will rub the eyeball, causing ulceration and eventual blindness in the eye. Correction is simple, but it must be done immediately. If you notice the condition in your foal, call your veterinarian.

Other possible problems may involve the foal’s legs, the two main difficulties being contracted tendons and angular (“crooked”) deformities. A foal with contracted tendons often cannot stand, so the affected foal should not be turned out. Stall rest and support bandages are required, sometimes along with medication to help reduce the contraction. If the condition is serious, the foal may need to be tube fed for a few days.

Angular deformities, unless severe, will not prevent your foal from leading a fairly normal life, but they may prevent the animal from becoming a performance horse. Time is often the only remedy needed, but when self-correction does not occur, let the veterinarian decide how long to wait before intervening. Simple periosteal elevation works remarkably well in most cases.

Next to angular deformities, umbilical hernias are probably the most common defects in young foals. Even so, they are far from usual. The problem is present at birth, but may not become apparent until days or weeks later, when a bulge appears on the underside of the foal’s belly.

A hernia is the protrusion of an organ or tissue through an abnormal opening, in this case a deficit in the abdominal wall. Hernias range in size from the diameter of a pencil (or smaller) up to a hole 2 inches or so in diameter. In the case of the umbilical hernia, the hernia is not the problem; the danger of a loop of intestine dropping through and becoming strangulated is. Even the larger ones often repair themselves, so unless a loop of intestine drops into one, just leave it alone and observe regularly. In addition to your own observations, have the veterinarian check it periodically.

If the hernia doesn’t reduce on its own, or if the intestine is involved, one of two procedures can be performed. If the hernia is smaller than two fingers in diameter, the vet can clamp it; this is best done in the fall or winter when the flies are gone. If, however, the intestine is involved, don’t wait. If the opening is greater than two fingers, surgery is necessary.

The other condition is pervious urachus, which involves the structure within the umbilical cord that carries urine from the fetal bladder to the placenta. This is supposed to close at birth and usually does, but occasionally it stays open (“pervious”) or partially open. In rare occasions it may reopen a day or so after foaling, and become infected.

This often goes unnoticed because of a lack of inspection, so make inspection a part of your routine. On the morning after foaling, and every morning for a few days thereafter, feel the stump. If it is wet, call the veterinarian. Cauterization with silver nitrate sticks for a few days will take care of the problem in most cases.

Most likely your mare will present you with a normal, healthy foal. In that case, you must first get a halter on the foal! Check the halter regularly for correct fit, and replace it as needed. Second, use that halter. Handle the foal, pet it and lead it around to let it become accustomed to the halter and to being handled.

Within the next day or so after foaling, worm your foal with an appropriate paste wormer. This will help in controlling foal heat scours (diarrhea that occurs at about eight to ten days of age), as well as assuring that the foal gets off to a parasite-free start in life. If diarrhea does develop, cleanse the area with warm water and apply a coat of petroleum jelly. If it persists for more than two days, or has a strong odor, call the veterinarian. Continue to worm the foal at one-month intervals until it is an adult, at which time it can go to a two-month schedule. Shortly after birth, also give the foal a paste gut inoculant available through your vet.

Assuming your mare was properly vaccinated and is thus able to protect her foal through nursing, you need to begin the foal’s own vaccination program (depending on your area) at 90 days of age. Your veterinarian will guide you as to what schedule to follow after the initial vaccinations.

The key to raising a healthy foal, and ultimately a healthy horse, is observation. Other than you, no one is more concerned with your foal’s well-being than your veterinarian, so look your foal over every day and call the doctor if you notice anything out of the ordinary.

Note: This article is provided as basic information, and is not intended to supersede veterinary consultation. Always talk to your veterinarian regarding any equine health problems you might encounter.

See all mares and foals articles >> 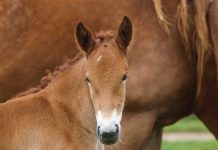 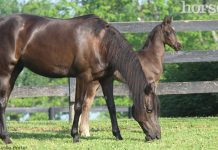 How Old is Too Old to Breed a Mare? 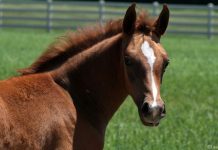 5 Extra Things to Add to Your Foaling Kit 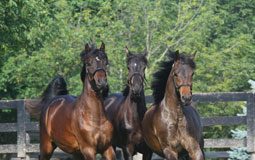