A relatively new American breed, the National Show Horse (NSH) and its registry began in 1981. Originally, the NSH was an Arabian-American Saddlebred cross, resulting in the quintessential English show horse excelling in saddle seat classes such as park, English pleasure and equitation.

Since 2011, however, the NSH registry (NSHR) accepts any breed crossed with an Arabian as long as the resulting offspring possess a minimum of 50 percent Arabian blood. 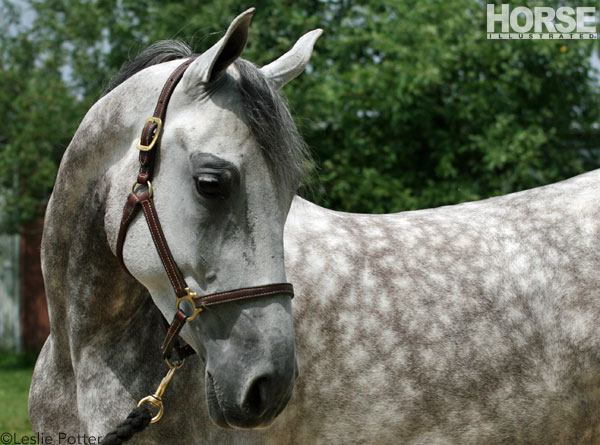 “Currently, about 17,000 horses are registered with the NSHR, and horses can be cross-registered with both the NSHR and AHA, as long as they meet the 50 percent Arabian blood requirement,” says Cindy Clinton, NSHR executive director.

Generally standing between 14.3 and 16.2 hands, NSHs are often chestnut, bay, black and gray. Some are palomino or have pinto coloration or markings from the non-Arabian parent.

With its upright conformation and animation stemming from the original Saddlebred blood, the NSH is still known as an excellent English show horse, both under saddle and in harness.

“The NSH continues to excel in English, country and park classes,” says Clinton. “Our hunter division is also very popular, and they do very well in the equitation classes with their junior riders.”

Now, with the inclusion of breeds besides the American Saddlebred, Clinton expects NSHs to be up-and-coming competitors in western disciplines and dressage in open shows. (The NSHR doesn’t offer a dressage division.)

“No matter what discipline they’re showing in, I believe the reason NSHs are so appreciated is because of their athleticism,” says Clinton.

Back to Half-Arabian Horse Breeds