The Florida Cracker descends from Spanish horses such as the Barb and the Spanish Jennet that arrived in the southern United States in the 1500s. Although it is genetically similar to the Mustang, Paso Fino and other modern Spanish breeds, the Florida Cracker’s geological isolation meant that the horses evolved to have its own distinctive features. The horses were ridden by cowboys called “crackers” because of the whips they used to round up cattle; their horses were given the same name. The Florida Cracker’s use in Florida was usurped in the 1930s by the American Quarter Horse, which due to its stouter size could deal with the necessary roping needed to administer screwworm medications to the cattle. Efforts to revive the Cracker are ongoing in Florida. Today, the horses are used for endurance riding and traditional western ranching pursuits.

Florida Crackers are small riding horses with heights ranging from 13.2 to 15.2 hands high. All colors are found. Although not all Crackers are gaited, many are and gaits include: the flatfoot walk, running walk, trot and amble. 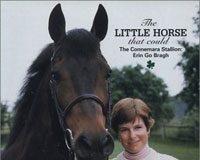