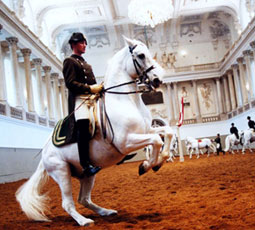 The Lipizzaner is known even to those outside the horse world as a result of the 1963 Walt Disney movie “Miracle of the White Stallions,” as well as the popularity of the highly trained Lipizzaners at the Spanish Riding School in Vienna. The school’s haute école (“high school”) classical dressage exhibitions and occasional world tours spread the magic of the horse-human bond. Two touring groups in the U.S. also share the Lipizzaner’s talents through productions and demonstrations.

However, despite public appreciation, the Lipizzaner is still a rare breed. Only about 10,000 purebred Lipizzaners are estimated to live worldwide, according to the Lipizzan International Federation (LIF) in Austria, with about 1,500 of them in North America.

Because of the relatively small number of foals born each year, breed associations—including the LIF, the Lipizzan Association of North America and the United States Lipizzan Federation (USLF)—are committed to ensuring both the continued existence and the perpetual quality of this rare breed.

The Birth of the Lipizzaner

Selective breeding of the Lipizzaner (or Lipizzan) began in 1580 under the reign of Archduke Charles II of Inner Austria. After purchasing the small stud farm Lipica (Lipizza) in Karst near Trieste, Italy, his goal was to breed the best horses for cavalry, hunting and pulling royal coaches.

At the time, Spanish horses were prized mounts in Europe, so he purchased Andalusians from Spain and crossed them with Neapolitan lines and horses from the Polesine region of northern Italy. Additional crosses to Spanish horses bred in Germany and Denmark and Arabians from Syria created the noble Lipizzaner horse, considered by many to be Europe’s oldest domesticated breed.

Charles II’s choice of a stud farm located in harsh mountain terrain with an equally challenging climate was no mistake. The land provided young Lipizzaners—then called Spanish Karsts in recognition of their Iberian ancestry—with the room to run to develop stamina, surefootedness, confidence and strong bodies.

Beginning in 1920 and continuing today, the stud farm in Piber, located in the mountainous Austrian province of Styria, became the primary stables for the Spanish Riding School’s breeding program.

A Future Shaped by War

Warfare was a fact of life in the early years of the Lipizzaner breeding program. Whenever military conflict threatened, the horses were moved to safer locations. World War II brought perhaps the most famous, and most fortunate, relocation.

When the war threatened Vienna, Colonel Alois Podhajsky, chief stable master of the Spanish Riding School, moved the stallions at the school to Lainzer Tiergarten, the stables and former hunting area of Emperor Franz Joseph I. The Spanish Riding School was evacuated in February 1945; the horses at the Piber stud farm had already been moved to a farm in Hostau, Czechoslovakia, which was under German command.

Fearing that the likely Russian occupation of Hostau following the fall of German rule would result in the destruction of the stud farm and priceless horses, Colonel Podhajsky secretly handed over more than 1,000 horses to American troops. The relocation, led by General George S. Patton, a dressage rider and competitor in the 1912 Stockholm Olympics, moved the horses to safety in Bavaria, where they were put under the protection of the U.S. Army. This was the inspiration for the Disney movie “Miracle of the White Stallions.”

After World War II, the evacuated Spanish Riding School in Vienna faced economic and social issues. Would the school’s unrelenting focus on the classical training of horse and rider—considered by some critics as art for art’s sake—still be considered a viable use of Austrian funds? How would the Austrian people compare the value of taking care of horses to that of taking care of people, especially in a post-war economy?

Colonel Podhajsky, his staff and the horses returned to Vienna in 1955, and they continued to focus on training and preserving the tradition of classical dressage riding. Tours in Europe and the U.S. helped spread the word of the Lipizzans, but Colonel Podhajsky knew that the Spanish Riding School needed to change with the times. He opened the stables to all visitors—not just dignitaries and royals, as was tradition in the past—spread awareness of the marvelous white stallions through international tours, and wrote classically based training books, all of which helped secure the future of the Spanish Riding School and the Lipizzaner stallions in Vienna.

Additional changes came about with the 2007 appointment of Elisabeth Gürtler as managing director of the Spanish Riding School and Piber stud. A former member of the Austrian dressage team before she retired from riding, Gürtler supported the introduction of more family-friendly and general-interest activities at the school and stud farm, including guided stable tours, carriage rides, parades, dinners and wine tastings, all centered around the engaging Lipizzaners.

Perhaps her most daring decision was the introduction of the first female eleves, the young trainees at the Spanish Riding School. In 2008, the first two young women joined the ranks as eleves and paved the way for future women who share the same dream.

Life with a Lipizzaner

The Lipizzaner’s talents and personality are well-suited to everyday pleasure riders as well as high-level dressage and driving competitors.

“If you’re fortunate enough to earn the trust of a Lipizzan, he’ll become your willing partner for every endeavor,” says Muffin Smith, secretary of the USLF. “I think many of us are initially attracted to this breed because of its elegance and athleticism, but then we are completely won over by its intelligence and the depth of personal connection the horses have with trusted humans. If more people knew how wonderful this breed was, Lipizzans wouldn’t be nearly so rare.”

Lipizzaners also have a natural talent for equine therapy. In short, any task that requires heart, stamina and a patient yet confident temperament aligns with the Lipizzaner.

“The kind, patient and loving nature of the Lipizzan makes it an ideal breed for use in equine therapy programs, as does its versatility and longevity,” says Marge Tautkus Gunnar, founder of BraveHearts Therapeutic Riding & Educational Center in Illinois, offering hippotherapy to people of all ages, especially wounded veterans. “My late Lipizzan stallion was my touchstone during a very difficult illness, and the strength and courage I found through him was my inspiration to found BraveHearts.”