Home Horse Breeds The Treasure of Brazil: The Mangalarga Marchador

When most Americans think of Brazil, they tend to picture soccer fanatics, elaborate Carnival celebrations and Rio de Janeiro’s famous beaches. But this massive country has much more to offer than surf and sports. For equestrians, Brazil is home to a hidden gem of the horse world: the Mangalarga Marchador. 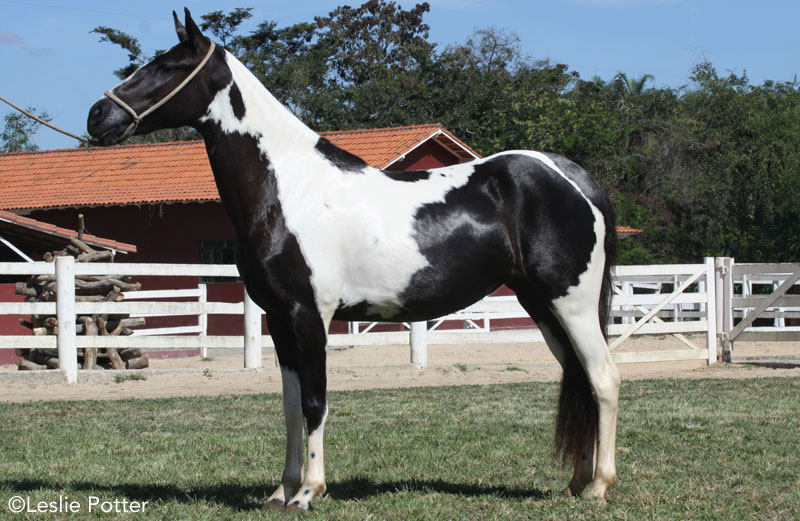 The Marchador’s origins can be found in the state of Minas Gerais in southeastern Brazil. This picturesque region is known for its varied topography, which includes seemingly endless mountains and valleys covered in verdant forests.

Marchadors were first established from Iberian horses brought over by Portuguese settlers. The breed has since spread across Brazil, but Minas Gerais remains its epicenter. The Associação Brasileira dos Criadores do Cavalo Mangalarga Marchador (ABCCMM), the breed’s registry, is headquartered in the capital city of Belo Horizonte, and the Mangalarga Marchador museum is in the town of Caxambú in the southern part of the state.

My introduction to the Marchador was a total-immersion experience. I had never seen one in person, much less ridden one, before I made the trip to Brazil in June 2013 to tour some of the farms in the breed’s homeland.

At each of the three training farms I visited, the owners were eager to share their treasured horses with visitors, which meant I got to do a lot of riding. My first experience in the saddle was at a farm called Haras Portal near Belo Horizonte. I had no idea what to expect when I sat down in the saddle aboard a pretty pinto mare named Gostosa, but it took only seconds of the marcha, the breed’s signature gait, for me to be hooked.

In photos and even when watching the horses from the ground, the marcha doesn’t look much different from a standard trot. The hooves land in a four-beat pattern with alternating lateral and diagonal support interspersed with a brief instant of three-hoof support. There is no suspension in the gait, which makes for a smooth, easy ride that looks and feels effortless.

Marchadors will perform one of two types of marcha. When the gait is more lateral, it is known as the marcha picada, sometimes described as a broken pace. A more diagonal movement is called a marcha batida. The picada is generally considered the smoothest gait, but both gaits are prized in the breed.

The rugged terrain of Minas Gerais produces equally rugged horses. Brazilian horse farms typically keep their horses outdoors in a natural environment as much as possible. As a result, even the show horses are accustomed to navigating steep hills and rocky trails. My final ride in Brazil was at a ranch called Haras El Far aboard a mare named Begonia, who had a national title to her name. Far from a pampered show horse, Begonia gamely carried me up a steep path on a mountainside to a breathtaking view at the top. I had enjoyed my experiences riding Marchadors in the arenas at the farms we’d visited, but that cavalgada (group trail ride) with Begonia was what sold me on the breed.

The Mangalarga Marchador has existed for centuries in Brazil, but it only made its way to the United States in 1992 when a Brazilian partnership imported several mares and stallions to MM Horse Farms in Florida. However, with a limited pool of horses, the breed didn’t make much of an impact at first. Beginning in the early 2000s, more Marchadors were imported by several separate owners, which helped to establish the breed in the U.S. Today, there are approximately 250 Marchadors registered with the U.S. Mangalarga Marchador Association (USMMA.)

“Our members pretty much do everything with their Marchadors,” says Rick Schatz, USMMA president and breeder of Marchadors at his Flying Oaks Ranch in Oklahoma. “We have some members that work cattle, some that do western dressage, and others that do endurance. Marchadors do pretty much everything any other breed does.”

Lynn Kelley and her husband operate Summerwind Marchadors, Inc. in Arizona. She explains that while there aren’t enough Marchadors in the U.S. to support breed-specific shows yet, American owners find plenty of ways to enjoy their horses.

“Almost everybody who owns Marchadors trail rides their horses, whether or not they also compete with them,” says Kelley. “But if they do compete in gaited horse classes, like the champagne-glass class, they do pretty well.” Kelley says that Marchadors are also competing successfully in other open classes such as mounted shooting and jumping. The breed’s intelligence and surefootedness make them excellent mounts for competitive trail events.

Although its smooth gait and striking appearance are selling points, Marchador enthusiasts most often state that it is the horse’s mind that makes it so irresistible.

“After moving out west, my husband started riding for the first time,” says Kelley. “He was learning to ride on a gaited horse, so I wanted to find a gaited breed.”

Kelley’s background was with Arabians, so she looked for a horse that would match the beauty of that breed with a docile nature and smooth gait for her husband. When she searched online for her ideal horse, the Mangalarga Marchador came up. Kelley bought her first Marchador in 2001 and has been involved with the breed ever since.

“The thing that impressed me the most is their temperament,” says Kelley. “They’re so smart and people-oriented. They’re very much a working breed. They like to work, and they really pay attention to their rider. Other things can be going on around them, but they stay focused on their job.”

Schatz had a similar introduction to the breed when his wife, Liz, picked up riding as a hobby.

“I was living in Brazil in the late 1990s, and my wife had started riding with her friends as a pastime,” says Schatz. “She would come home and tell me, ‘You need to ride these horses.’ Both of us have a ranching background, and I told her that I’d ridden all the horses I wanted to ride.”

Eventually, Schatz’s wife convinced him, and it didn’t take long for him to fall in love with the breed as well. The couple leased a ranch in Brazil and raised Marchadors there. After retiring and returning to Oklahoma, the Schatzes were introduced to the small community of breed enthusiasts in the U.S. and quickly became involved in promoting the breed.

Although few trainers in the U.S. have experience with the Marchador, the breed’s docile nature and intelligence makes it easy to work with.

“Any good trainer can train these horses,” says Schatz. “The gait comes naturally. Usually once the horse gets in the gait, you’ll know it immediately.”

While the breed is still rare in the U.S., it has earned a devoted following of breeders and owners who are happy to share their equine treasure with newcomers. The USMMA’s website at www.namarchador.org includes a map of all Marchador owners in North America. Contact the association to get in touch with local owners to meet the Marchador in person. 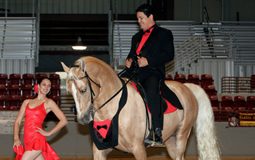