The Trakehner is one of the oldest European warmblood breeds, with its history going back more than 400 years. The breed is based on a local horse (then found in East Prussia) called the Schweiken. The Schweiken was well known for its endurance and versatility and was considered the perfect breed for cavalry horses.

King Friedrich Wilhelm I of Prussia selected seven horses from various stud farms and took them to the new royal stud Trakehnen to create lighter cavalry horses in 1732. From 1817 to 1837 English Thoroughbreds and Arabian stallions were mixed into the breed. These additional bloodlines refined the Trakehner, giving it the lovely floating trot and elegant canter that is the breed’s hallmark.

Today, the Trakehner is prized all over the world for its jumping and dressage talents.

The Trakehner stands from 16 to 17 hands on average and in all solid colors. At first glance, grace and presence mark the Trakehner. Although it is a solid breed, the Trakehner is lighter than any of the other warmbloods. The head is refined with large eyes. The long legs and a long, well set neck add to the refined appearance.

This profile was originally posted on December 15, 2006. 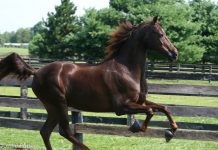