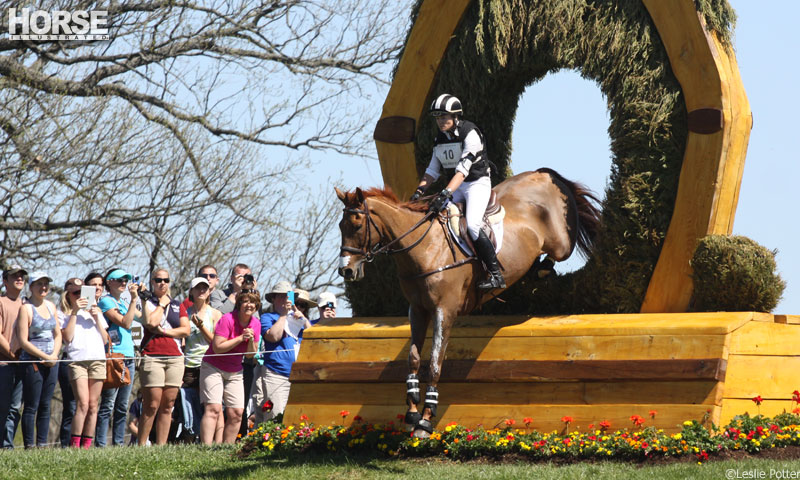 The 2014 Alltech FEI World Equestrian Games took place the coast of Northern France in Normandy. The region is known for its vivid landscape—green grass dotted with the blacks, browns and whites of dairy cattle and the sloshing blues, greens and grays of the cold Northern Atlantic along chalky white cliffs. Add to this visual palette the gleaming gray, bay and chestnut coats of the horses that call to mind the area’s celebrated equine heritage.

France has developed more than 20 different breeds, from the Selle Français to the powerful, expressive French Trotter; the wild Camargue; and the French Saddle Pony. The country also breeds Thoroughbreds, Arabians and Anglo-Arabians. Here’s a guide to some of the most popular French breeds.

Cheval de Selle Français
Did you know that France is one of the world’s top horse exporters? In fact, when the United States Equestrian Federation announced its short list for the show jumping team heading to the Games, three Cheval de Selle Français, or French Saddle Horses, were in the group: Nougat du Vallet (aka “Nu Nu,” ridden by Katie Dinan); Mika (with Reed Kessler aboard); and Lauren Hough’s 2010 Games mount, Quick Study. Sinead Halpin and her Selle Français gelding, Manoir de Carneville, were named to the eventing short list.

The Selle Français breed originated at the historic national stud farm La Haras National du Pin in the same region where the Games will be held. The ornate 16th-century estate was commissioned by King Louis XIV to stable royal stallions, and provides a center for cultivating the French breeds. This is where the cross-country phase of the eventing competition for the 2014 Games will take place. Show jumping and dressage (along with both the opening and closing ceremonies for the Games) will take place in the D’Ornano Stadium in nearby Caen.

The strength, fire and balance that gets the leggy bay gelding Quick Study around complicated show jumping courses at top speed, and the intelligence and athleticism that get Manoir de Carneville over massive cross-country obstacles with ease, exemplify the breed’s best qualities. These characteristics have been cultivated over centuries of careful breeding.

This warmblood-type horse emerged in the 1800s when heavier equines like French Trotters were crossed with French-bred Thoroughbreds and other French horses, such as the Angevin, Limousin and Corlais.

As the purpose for breeding these horses changed from agriculture to military to sport, the breed was fine-tuned to produce muscular, strong-boned and powerful mounts that excel in show jumping but are also successful in eventing and dressage.
Found in all colors (chestnut and bay are the most common), the Selle Français is admired for its elegance and calm nature. It typically stands between 15.2 and 17 hands.

French Trotter
Another breed with roots in Normandy is the French Trotter, developed in the 19th century when Norman mares were bred with an extinct English draft breed called the Norfolk Roadster. The mix resulted in a horse that provided quick and comfortable transportation whether pulling a carriage or carrying a rider. With the help of Thoroughbred blood (and American Standardbreds until the late 1930s), the breed has produced many successful trotting racers. A French Trotter is known for having a strong neck; a deep chest; and long, strong limbs.

French Trotters are also seen in the sport of combined driving, like top American driver Chester Weber’s imported 19-year-old French Trotter gelding, Horus Du Bois. Clever, fast and expressive in the trot, Horus energetically leads Weber’s team on marathon day, but is a pet at home. Born in France, this French Trotter will likely return to his country of origin to compete on Weber’s four-in-hand team at the Games.

Percheron
One of the oldest French breeds, the Percheron’s history stretches back to the 8th century as both a carriage and farm horse in the Perche region in lower Normandy. In the 19th century, local broodmares were bred to Arabian stallions to produce robust but very lively horses with an animated gait. 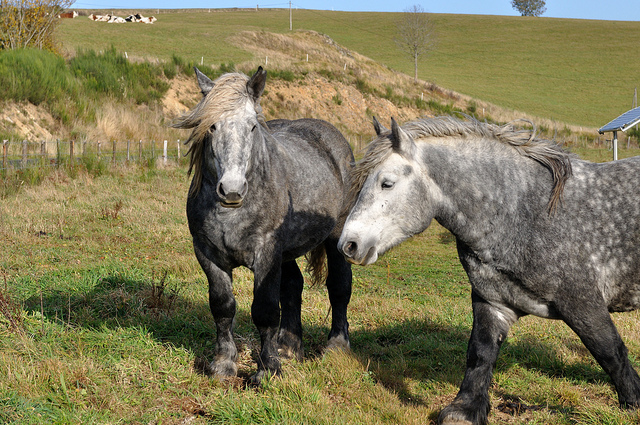 Around this time, the French government bred these large horses (standing 15 to 19 hands high, though they have been recorded as tall as 21 hands) for cavalry purposes. Although made for heavy work, Percherons have also made prized riding horses. Today, Percherons are crossed to other breeds—such as Thoroughbreds, warmbloods and Spanish horses—to create sound, tough sporthorses with eye-catching movement.

Norman Cob
The sturdy Norman Cob, another breed that hails from the region around Normandy, was traditionally used for farm work, driving and riding. These all-around horses are similar to English Cobs, which could both carry a rider and do the work of a draft horse. Norman Cobs are usually bay or chestnut. Compact yet long-limbed, these energetic, well-balanced horses stand 15.3 to 16.3 hands high.

Like the Selle Français, the French Trotter and the Percheron, the Norman Cob is bred at the historic government-run stud, La Haras National du Pin. They can still be seen working in the pastures of rural France. And at the Games, the breed (referred to in France as Le Cob Normand), will be present during exhibitions at the Games Village and participate in the opening ceremonies.

A freelance writer and children’s author based in Washington, D.C., KITSON JAZYNKA contributes regularly to Horse Illustrated. Her horses enjoy the good life in nearby Potomac, Md. Read her blog at HorseChannel.com/OverTheFence.

Morgans in the Snow: A Photo Portfolio