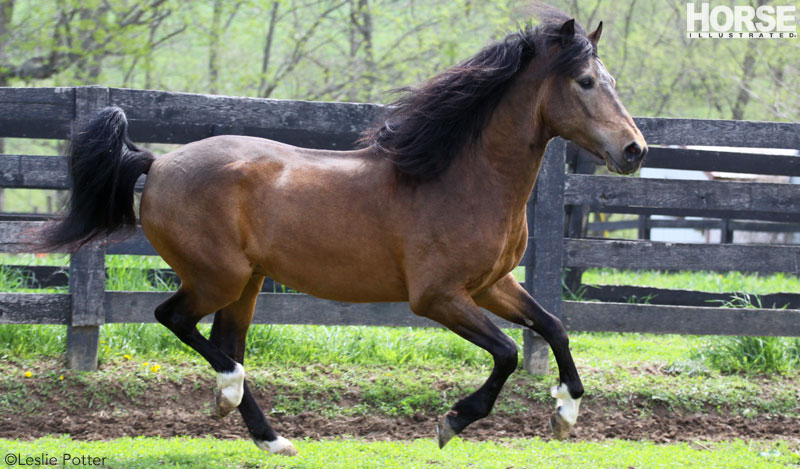 Paso Fino
The Paso Fino originated in the 1500s and is descended from horses brought to the New World by Spanish Explorers. At the time Columbus prepared for his second voyage to the New World, easy-gaited Jennets were common in Spain. With their comfortable gait, medium size and athletic ability, these horses were considered ideal for the daunting task of exploring and conquering the vast, unknown territory.

When Columbus landed on the island now known as the Dominican Republic, he and his men established breeding centers designed to supply the Spanish conquerors with horses for their explorations. Prized Andalusian horses were brought from Spain soon afterward, and when crossed with the Spanish Jennets, they produced a horse known as the Paso Fino, meaning “fine step.” As with many other horses of Spanish descent, the early Paso Fino was gaited as a result of its Spanish Jennet heritage.

Horses from this breeding program eventually made their way to South America, and later to other Latin American countries.
Paso Finos were bred solely in South America and on various Caribbean islands until the mid-1940s, when members of the American armed forces who had been stationed in Puerto Rico fell in love with the breed and started bringing the horses home to the U.S. Two decades later, many Paso Fino horses also began to be imported from Colombia. In 1972, the Paso Fino Horse Association was founded to register and promote the breed in the United States.

Since its founding over 25 years ago, the Paso Fino Horse Association has registered nearly 30,000 horses in the United States.

Paso Fino horses are exceptional show and trail horses due to their smooth four-beat lateral gaits. They are used in endurance competitions, competitive trail rides, and are versatile enough to compete in western classes, work with cattle, drive and participate in parades.

The paso corto is faster than the classic fino. The horse’s extension is medium at this speed, although the gait should not appear hurried.

The paso largo is the breed’s fastest gait. A longer stride and greater extension are exhibited at this gait than in the others. Depending on the individual horse, the paso largo can be as fast as a gallop.

PASO FINO CHARACTERISTICS
Body: The back is strong and muscled. The croup is slightly sloping, with rounded hips and strong hocks. The withers are defined but not pronounced, and slope smoothly into the back.
Head & Neck: The head is refined and has a straight profile. The ears are comparatively short, set close together and curved inward at the tips.
The neck is gracefully arched and medium in length.

Back to Latin American Horse Breeds >>