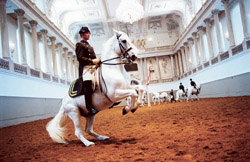 Dancing horses and dramatic equestrian theater such as “Cheval” and “Cavalia” have captivated audiences, attracting attention from equestrians and the mainstream public, in the United States over the past several years. But quietly, as they have been doing for the last 400 years or so, the white Lipizzaner stallions of the venerable Spanish Riding School in Vienna continue to perform to the highest level of elegance a horse can attain. And soon, there will be a rare chance to witness their beauty right here on American soil.

The Lipizzan, a noble European horse breed, is one of Austria’s cultural and historical treasures. The breed dates back to 1580, when the imperial stud was founded at Lipizza to cultivate the Spanish horses favored by Renaissance horsemen and Austrian royalty for practicing the art of classical horsemanship. The Spanish Riding School was established in Vienna in the 16th century, and endures still today.

The Lipizzaners are commonly known as “the dancing white horses,” but what they do is not to be confused with smoke, mirrors and artificial circus tricks. As head rider Johann Riegler of the Spanish Riding School explains, the training is done in a progressive way, based on movements that are natural to the horse. It takes up to eight years of training to completely develop a “high school” horse for the advanced routines of the Spanish Riding School. “What you see is not a show so much as a performance to celebrate the work,” according to Riegler. “The horse has rhythm,” he explains. “We put the music to the rhythm of the horse.”

The School is especially proud of the airs above the ground. The spectacular leaps in this ancient choreography were originally battle maneuvers, yet artfully cultivated into ballet so that it looks beautiful. It’s more what you won’t see during the performance that is special: The rider’s aids and dialogue between rider and horse are nearly invisible.

It is a performance you feel to your very soul. To marches, waltzes and graceful symphonies, the white stallions perform the cultivated gaits and movements of the classical school—smoothly executed tempi changes, half-passes, pirouettes, piaffe, passage. Two horses, mirror images, dance with Mozart in the pas de deux. The grand finale is the School Quadrille—a seamless display with eight stallions, moving in unison.

Work in hand illustrates the beginning steps to learn the airs above the ground. When it comes time for the display under saddle, it is dramatic—the careful balance of levade, the explosive kick of the capriole, the powerful leap of the courbette. The horses that perform the airs above the ground are specialists, carefully selected for each maneuver.

Only the most talented horses perform solo, including work on the long lines, where the rider walks beside or behind the horse, for a spectacular display of grace, control and athletic mastery. The solo ride is a special performance that features all the gaits and movements; it requires a high degree of responsiveness since it is ridden one-handed.

If you have an opportunity to travel to Vienna, the baroque magnificence of the Winter Riding School in the Imperial Hofburg Palace where the horses perform is the perfect frame to this work of art. There’s a sense of timelessness as riders enter the hall and doff their bicorne hats in a salute to the portrait of Emperor Charles VI, who commissioned the building in 1729. In addition to its goals of maintaining the art of classical riding and preserving the Lipizzan breed, it is important to the Spanish Riding School to maintain the traditions and history for future generations.

Approximately 150 miles outside of Vienna, Piber Federal Stud is where Lipizzaners are bred to carry on the work of the Spanish Riding School. Breeding operations were transferred from Lipizza to Piber, near Graz in Austria’s upper Styria region, after World War I. Because Piber breeds specifically for the needs of the Spanish Riding School, the horses they produce are baroque in type—built for classical dressage, which differs from competitive dressage.

Only the best horses are allowed to breed. The stallions are proven performers from the Spanish Riding School, and even the young mares are evaluated and trained for carriage driving and under saddle before joining the broodmare herd. Currently, there are around 300 Lipizzaners at Piber.

The Lipizzan Way of Life

Not much has changed through the centuries. At Piber, breeding is carefully planned, foals are born, and youngsters lovingly nurtured and thoroughly documented. Lipizzaner foals are born coal black and gradually turn white, although a very few are born and remain brown. For the first six months, the foals stay with their mothers, but there is emphasis on social interaction with humans, building confidence in people. This relationship remains a cornerstone for the horses’ future. Days at pasture allow physical development and build character through herd interaction. At 6 months, the foals are weaned and sent up to the Alpine pastures for the summer.

The young horses lead a carefree life, as they are left to grow and mature up until age 3. Then, the very best young stallions will be selected to go to Vienna. The decision is based on the individual horse’s conformation, temperament and athletic potential, as well as pedigree (the breeding program must plan for generations ahead), and what talents are currently in need at the Spanish Riding School.

At age 4, the chosen stallions arrive at the Spanish Riding School to begin the systematic training in classical horsemanship ascribed by the Greek commander Xenophon in 400 B.C. and the great riding masters of the Renaissance, practiced by the School in the same way today.

Elizabeth Moyer is the editor of Horse Illustrated magazine.