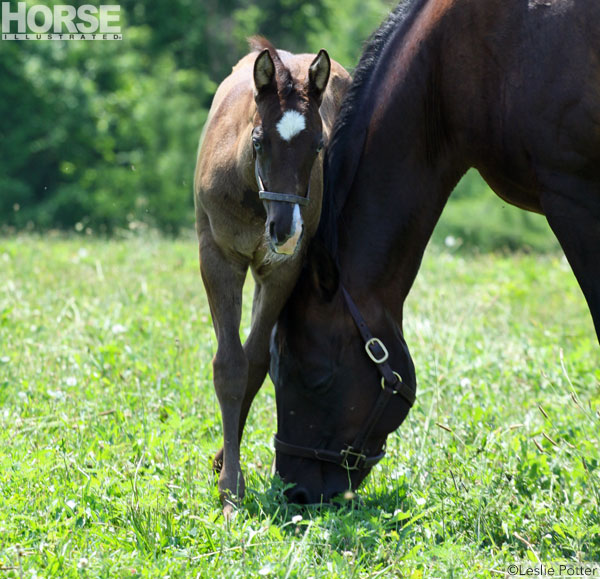 There is nothing on Earth quite so wondrous as the miracle of birth. How awe-inspiring and somehow humbling it is to be present as a new life makes its way into the world. To bear witness to life’s grand event is truly an experience like no other, from the tempest of the actual delivery to the gentle moments of recognition and bonding between mother and newborn that follow. No matter how many times I see it, it never fails to thrill and amaze me, and I am certain these feelings are familiar to nearly everyone who has shared this.

I was an intern in a college equine program the first time I saw the birth of a foal. As I went about the business of mucking stalls early one winter morning, I was interrupted by a teacher’s assistant who eagerly led me to a box stall where three other students clustered in absolute silence. We watched as unobtrusively as possible as the beautiful Arabian mare, Angel Eyes, paced from one end of the stall to the other, drenched in sweat. Her chorioallantoic placental membranes had ruptured moments before I arrived, releasing allantoic fluid and alerting us to the impending delivery. As we watched, she dropped to the ground and rolled. When she stood up again, one tiny hoof was protruding from her vulva. She dropped back down again and continued to strain, and little by little, more of her foal was revealed. I glanced at my friend Kelly standing beside me and saw the tears welling up in her eyes. The birth of this filly was an emotional encounter for everyone present, but for myself, the fledgling animal behaviorist in the group, the fascination went far beyond the delivery. I was glued to the spot as the mare started nuzzling and licking her foal, stimulating the filly to stand and seek nourishment. I took notice of the protective posture she assumed whenever anyone came between her and her foal.

Later, as this filly grew, I wondered how she recognized her mother in a pasture full of mares and what motivated her mother to want to care for her at all. I was intrigued by the intricacies of their instincts and the communication going on between them and the world they lived in.

The delivery and postpartum period are governed by a complex blend of hormonal signals, behavior learned from prior experience and sensory stimuli, such as sights, sounds and smells, that stimulate particular behavioral responses. Progesterone is the main hormone that supports pregnancy in the horse. On the day before foaling, progesterone levels decline, and the change in the ratio of estrogen to progesterone results in physiological changes that stimulate labor to begin. Other hormones have important roles in labor as well, such as relaxin, which is thought to relax the cervix and birth canal during parturition, and oxytocin, which is thought to initiate the presentation of the placenta, resulting in the breaking of the water before delivery. One study indicates that mares appear to have some means of controlling oxytocin release (this would explain how most mares manage to delay parturition until nighttime). Preparturient fluctuation in some of these hormones have been found to induce maternal behavior in sheep and likely function similarly in the horse. After delivery, a variety of physical stimuli, such as the smell of fetal fluids, the appearance of the foal and the sounds the foal makes, all help attract the mare to her foal. If the mare has had other foals, her prior experience with motherhood also helps her to identify and begin mothering her foal. This interaction of hormonal influences, sensory cues and learned experience is the bonding process we see when we observe a mare sniffing, licking and nickering to her foal after parturition.

The mare’s attraction to the fetal fluids on the foal serves another important purpose. The vigorous licking and nudging of the fluid-covered foal stimulate it to try to stand and move away from the activity. In the wild, it is important for the foal to learn to stand and control its gangly limbs as swiftly as possible. The foal must be strong enough to leave the birthing site with its dam before dangerous predators are attracted by the afterbirth (or by the foal itself). It is certainly adaptive behavior for this species that mares tend to deliver their foals at night and that normal foals are able to stand and move about almost immediately after delivery.

Once the immediate safety needs of the newborn have been met, the next priority is to seek nourishment. Normal animals are born with the suckling reflex intact and do not need to learn this behavior. In fact, I have felt attempts of mature fetuses to suckle my fingertips in utero during rectal palpation examinations. As anyone who has watched newborn foals attempt to suckle everything in sight already knows, finding the nipple for the first time is largely a trial-and-error process, but attraction to the mammary gland is enhanced by olfactory (odor) cues. Good sanitary practices are important in minimizing a foal’s exposure to infectious agents during foaling, but if cleansing of the mare’s udder is overdone, the odor of mammary secretions, which helps the newborn locate the udder, may be removed. Driven by hunger and the urge to suckle, most foals will stumble around in pursuit of the elusive udder until they locate it.

The Role of Nursing

Owners should refrain from intervening to assist the foal so that the natural bonding process is not interrupted. At the same time, it is important to realize that foals are born without natural immunity. They must drink their dam’s first milk, called colostrum, within several hours of birth to gain protection against disease for the first few months of life while their own immune systems develop. As a rule, if successful nursing does not occur within two hours of birth, it is advisable to assist the foal in locating the udder. If the foal still has not succeeded three hours after birth, contact your veterinarian for assistance.

When the foal finally succeeds in nursing, the suckling stimulation of the nerve endings in the teats causes the release of oxytocin from the hypothalmus in the brain. Oxytocin in turn stimulates cells in the mammary gland to contract and release more milk into the large mammary ducts. In this way, the suckling activity stimulates more milk to be released. Mares learn to stand for suckling because the activity provides relief from the discomfort of udder distention. Some maiden mares or mares with sensitive, swollen udders may move away or try to kick when the foal first attempts to suckle. This should not be confused with foal rejection altogether. Most resistant mares learn to appreciate the relief from distention that suckling provides if they are gently restrained with one front leg held off the ground during the foal’s first attempts at nursing. 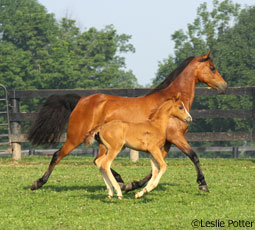 The stimuli by which the mare and foal learn to recognize each other during the bonding process include visual, auditory and olfactory cues. A 1972 study of wild ponies considered that foals learn the specific nicker of their dams, and that this sound helps foals locate their dams while in close proximity. Another study determined that mares and foals take longer to find each other after separation when either sight or smell is impaired, and longer still when both of these senses are masked at the same time. It is during the critical hours after birth that the mare learns to identify her foal using these senses. This is why it is important not to interfere with the mare and foal during this time. (The foal is still susceptible to imprinting several hours after the birth process. In my opinion, the window of time has not been missed if it gets done somewhere in the first day of life.) In rare cases, a mare might not learn to recognize the foal as her own and may try to escape from it or even attack it. These situations are generally regarded as foal rejection. If the mare tries to avoid her foal, stimulating maternal protective behavior by bringing another horse into the mix might help her learn to mother her foal, as might simply allowing the mare and foal ample space to get comfortable around each other from a distance. If the mare actively attacks her foal, Dr. Houpt of Cornell University recommends placing a pole across a box stall so that the mare is restrained from moving. Although there is still some danger to the foal, it can generally learn to suckle without sustaining serious injury. Most of these mares will eventually tolerate their foals without restraint, but they are prone to resuming aggressive behavior in the future. There appears to be a heritable component to this behavior, so it may be unwise to continue breeding a foal-aggressive mare.

Perhaps you’ve heard about mares that become uncharacteristically aggressive toward other horses or human handlers when a foal arrives on the scene. Mares with strong maternal drives will often behave aggressively to protect their foals from anything they perceive as a potential threat, but this behavior also occurs because foals may need several days to learn to recognize their dams. During this time of uncertainty, foals will follow just about anything that moves. Mares are driven to protect their foals from following other animals, including humans, that may try to “steal” their foals away. If a mare is not vigilant during this time, a phenomenon known as mismothering might occur in which another animal successfully adopts and attempts to raise her foal.

Mares and foals are typically in close proximity to each other during the first days and weeks of life. Horses are considered a follower species, which like to keep their neonates nearby at all times, in contract to animals such as deer, which are part of a hider species that tends to stash their young in hiding places and leave them there during grazing.

Once foals are 1 or 2 months old, they begin to engage in play and mutual grooming with other foals. These activities teach foals her social structure, as fillies tend to bond with and groom other foals, while colts tend to do less mutual grooming. Foals also appear to learn their position within the herd from their mothers. In a 1980 study, foals of dominant mares were found to have high dominance ranks themselves, while in earlier studies, orphan foals were not found to have the similar dominance ranks as their mothers.

Many questions remain about the complex behavioral events called maternal behavior. Which traits are heritable? Which are learned? How can we avoid behavioral disasters in foaling and mothering? Many important questions are being investigated and new information is on the horizon. In the meantime, take time this foaling season to see and ponder for yourself these mesmerizing events in all their beauty and complexity.

Liked this article? Here are others on mares and foals:
Feeding Broodmares and Foals
Orphan Foal Critical Care 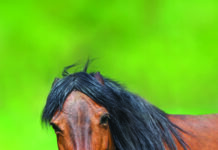 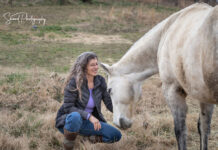 Horse Behavior: Forgetting a Painful Past