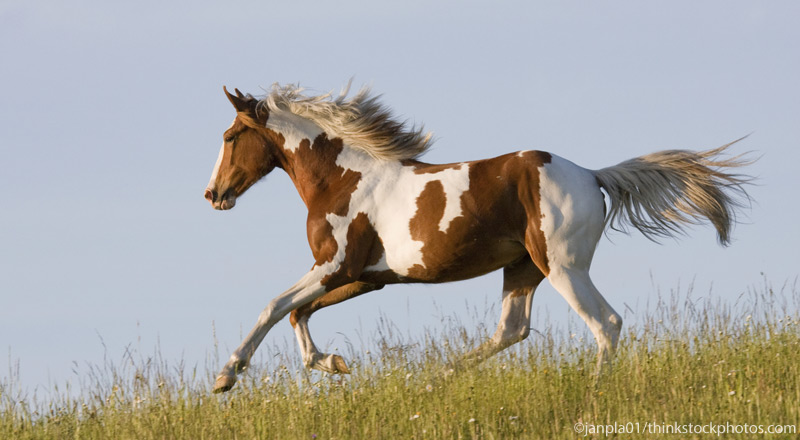 The flashy, multi-toned coat of the American Paint Horse traces back to the horses brought to North America by Spanish explorers. When Native Americans acquired horses, they preferred the spotted color, and settlers later bred their own horses to Indian ponies out of necessity, perpetuating the coloring.

The pinto and Paint are often lumped together as the same breed; however, pinto is a color, and horses can be of any parentage as long as coat requirements are fulfilled. The American Paint Horse, on the other hand, must have one parent registered with the American Paint Horse Association (APHA) and the other registered with the APHA, American Quarter Horse Association (AQHA) or the Jockey Club (Thoroughbred). He must also display pinto coloration; offspring of Paint Horses that do not have coloration are referred to as Solid Paint-Breds.

When the AQHA formed in 1940 to preserve its stock horse breed, the organization excluded pinto and “crop out” horses (those born with white body spots or white above the knees and hocks). Pinto stock horse enthusiasts formed a variety of organizations to preserve and promote their animals, and eventually these groups merged in 1962 to form the APHA.

Today, Paints come in a variety of colors and two main coat patterns: tobiano and overo. Tobiano horses have well-defined vertical patches of color across their backs, and they often have white legs and coloring on their heads. The white in the overo horse generally doesn’t meet over the back. Overos usually have large white markings on their face and come in three different types. The frame overo has a frame of color around the white body markings. Sabinos have roaning at the edges of the white markings and white that extends past the face and chin; some “maximum white” sabinos are nearly all white. Splashed white overos have blue eyes, long white socks, white or blazed faces, and/or white on the belly. There is also a less common pattern called the tovero, which is a combination of the tobiano and overo.

Characteristics of the tovero include blue eyes (one or both) and a mostly white body with coloring on the ears, poll and sometimes the top of the neck. This marking is called the medicine hat or war bonnet (with less color than the medicine hat; sometimes the war bonnet, on the ears and poll, is the only coloring) and was highly prized by Native American chiefs and medicine men. Color patterns can also occur on the tovero’s hindquarters, chest or belly. A dark marking surrounded by a large patch of white, such as on the chest or face, is called a shield.

Paints are found in all English and western pursuits and are prized ranch horses. The breed ranges in height from 14.2 to 16.2 hands.