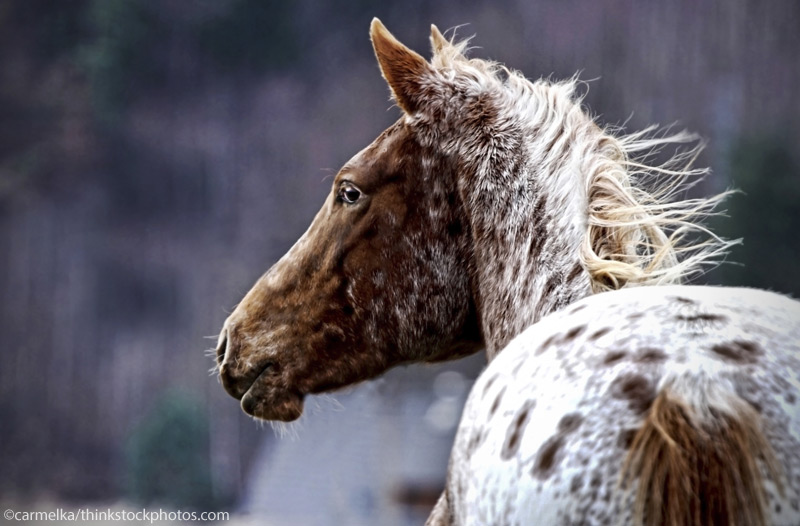 Cave drawings have proven that the Appaloosa’s spotted coloration has existed since pre-historic times. Spotted horses brought over the Pyrenees to Spain by the Visigoths were used to create the Spanish Jennet, which accompanied New World explorers on their travels and captivated the Native Americans with their beautiful coat patterns.

In the 18th century, the Nez Percé tribe, from the Pacific Northwest and inland Northwest, had become excellent horsemen and were the only Native Americans known to practice selective breeding. “The tribe bred first for speed and sure-footedness,” says Merida McClanahan, director of marketing at the Appaloosa Horse Club (ApHC). “It’s really a romantic notion that they bred for color first.”

European settlers referred to the tribe’s horses as “Palouse” horses, named for the Palouse River that ran through the area. In 1877, the United States Cavalry killed many of the Palouse horses, or Appaloosas, as they had been renamed, to ensure that the Nez Percé would never rise against the government. However, some horses escaped to the hills, and settlers and ranchers secretly kept them. Some Nez Percé were allowed to keep their horses, but only if they bred them to slower draft types and used them for farming.

In the late 1800s and early 1900s, interest in the Appaloosa grew, as the breed began appearing in western roundups and rodeos, and dedicated breeders formed the ApHC in 1938. “The Indians didn’t record their breeding practices,” says McClanahan. “The association had the full purpose of tracking and protecting the breed. It’s a different horse today than when the Nez Percé were breeding them. The gene pool was so small that in order to have a good-quality breeding base, the founders brought in breeds that already had traits from the Indian ponies, such as the Quarter Horse. Later on, they infused a little bit of Arabian blood. Essentially, the basics of what the tribe bred for in its stock are still there; it’s still the color, the versatility and the stamina.”

The modern Appaloosa has a muscular build with an upright carriage. Heights can range anywhere from 14.2 to 16 hands. The breed is characterized by a white sclera around the eyes, mottled skin and striped hooves. The Appaloosa has several color patterns. The snowflake pattern is a solid coat sprinkled with a dusting of white. A leopard Appaloosa has definitive spots over his entire body. A blanket marking consists of a solid white area over the horse’s hips, or up to his shoulders, and sometimes there are spots found within the blanket. Some Appaloosas are roan with dark strips along the face bones, known as varnish. The Appaloosa is a versatile horse used in all English and western disciplines, as well as racing.