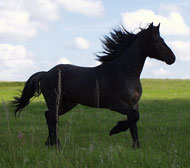 The Nokota Horse developed in the rugged Little Missouri badlands of southwestern North Dakota. DNA evidence has shown that the Nokota is descended from early 20th century ranch and Indian stock, which had all but disappeared since the 1950s.

“These areas in the Northern plains were the last strongholds of the natives, and where the last battles were fought,” says Frank Kuntz of Linton, N.D., who with his brother Leo began buying the horses to save them from slaughter or crossbreeding in the 1980s. “When the Sioux tribe’s medicine man and leader, Sitting Bull, was forced to surrender to the U.S. Army in 1881 at Fort Buford, N.D., he had to hand over his weapons and his horses.”

The tribe’s horses were sold to the fort’s traders, and many were dispersed through public sales. However, the Marquis de Mores, a French aristocrat and pioneer rancher of western North Dakota, showed interest in preserving these horses and bought 250 of them. The Marquis founded the town of Medora, the gateway to what is now the Theodore Roosevelt National Park. When the Marquis died in 1896, his ranch foreman rounded up and sold the horses. The ones that weren’t caught wandered into the badlands.

The horses in the badlands were inadvertently fenced in during the development of the Theodore Roosevelt National Park, and when the National Park Service began removing them from the land, the Kuntz brothers stepped in. They recognized that these park horses looked different from modern breeds and had a common conformation. By 1990, they began to call them Nokotas, a nod to their North Dakota origins. Today there are more than 1,000 Nokotas in the United States. The Nokota Horse Conservancy has an outreach program with local Sioux tribes to help re-introduce the horse culture.

Margaret Odgers of Carlisle, Ky., owns the Nokota Horse Blue Moon Rising, an ambassador of the breed who was ridden in the opening ceremonies at the 2010 Alltech FEI World Equestrian Games. “The history of these horses is very tragic, but it’s powerful,” says Odgers. “When you have one, you feel as though you are helping to preserve history.”

The large-boned Nokotas have a straight or slightly concave profile on a medium-sized head. The Nokota stands 14.2 to 15 hands. The coat is often roan, as well as bay, brown, chestnut or pinto. Due to their sure-footedness, the Nokotas are prized endurance and trail horses.