Although the horse originated on the plains of what is now North America, it became extinct here for unknown reasons. But the horse had migrated over an ancient land bridge to Eurasia and Africa, where it thrived and was domesticated. In 1493, Queen Isabella of Spain gave a variety of breeds of Spanish and Barb bloodlines to Christopher Columbus for his second voyage to the New World. These breeds included the powerful Andalusian, the hardy Sorraia and the gaited Spanish Jennet. Many more horses of these bloodlines were soon brought to the New World by subsequent Spanish explorers, thus reintroducing the horse to North America. Mounted on their horses, the Spanish were able to conquer the native people. 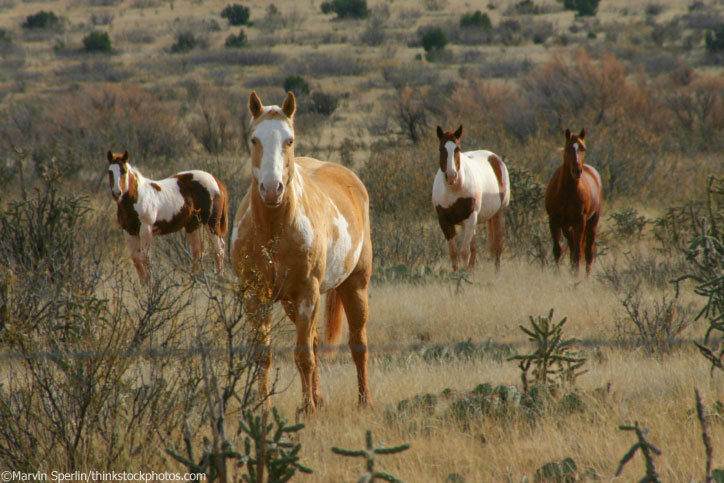 John S. Hockensmith, author and photographer of “Spanish Mustangs in the Great American West (Return of the Horse),” says that the natives were forbidden to ride horses, a crime punishable by death. “The Spaniards knew that if the natives got on a horse, they would be able to rebel,” he says. “Using horses, the Spanish kept the Indians in total fear. But in 1680, there was an Indian uprising in Santa Fe, and the settlers fled, leaving 3,000 horses behind. After that, the Indians had horses.”

Horses appealed to the nomadic tribes more than the agrarian tribes. Nomadic tribes—such as the Apache, Ute, Kiowa, Navaho and Comanche—followed the buffalo, and now they had a way to hunt them more efficiently. These tribes brought the horse farther into North America, adding to their herds by stealing other Indians’ and settlers’ horses, trading with other tribes and breeding their own.

Courage and speed were the characteristics prized most in horses. However, since all equine colors were present in the early Spanish breeds, Hockensmith says it’s likely that the Native Americans would have also chosen colorful horses because they were colorful people.

“They would paint themselves going into battle, so it stands to reason that they’d choose to ride the most colorful horses,” he says. “A warrior mounted on a pinto with a medicine hat marking believed that the horse was invincible and the warrior riding it could only be harmed if he had sinned.”

In the early 1800s, The United States government wanted the Native Americans’ land for settlers, so tribes were pushed off their native land. Rebelling tribes were able to evade the cavalry on their swift horses, so the only way to subdue them was to take away their horses. “Horses that remained [with the Native Americans] were bred to other breeds, such as draft horses, to make them slower.” By the end of the 19th century, the Native American horse culture was over, but the horses they favored remain living legacies. Some are very close to their native bloodlines, such as the Nokota and Spanish Mustang, while others, such as the Appaloosa and Paint, derived from native horses.

The flashy, multi-toned coat of the American Paint Horse traces back to the horses brought to North America by Spanish explorers. When Native Americans acquired horses, they preferred the spotted color, and settlers later bred their own horses to Indian ponies out of necessity, perpetuating the coloring.
Read more >>

Cave drawings have proven that the Appaloosa’s spotted coloration has existed since pre-historic times. Spotted horses brought over the Pyrenees to Spain by the Visigoths were used to create the Spanish Jennet, which accompanied New World explorers on their travels and captivated the Native Americans with their beautiful coat patterns.
Read more >>

When Meriwether Lewis, the famed second half of the Lewis and Clark expedition of the American West, crossed the Bitterroot Mountains into eastern Idaho in 1805, he noted in his journal that the Nez Percé tribe had very grand horses: “Their horses appear to be of an excellent race. They are lofty, elegantly formed, active and durable. In short, many of them look like fine English horses and would make a figure in any country.”
Read more >>

The Nokota Horse developed in the rugged Little Missouri badlands of southwestern North Dakota. DNA evidence has shown that the Nokota is descended from early 20th century ranch and Indian stock, which had all but disappeared since the 1950s.
Read more >>

The Spanish Mustang is the original Native American breed. It descends from the horses of the Conquistadors and Native Americans, and developed on the plains of the American West, growing stronger and thriftier through natural selection. The breed differs from the Bureau of Land Management (BLM) Mustang in that it shows little ranch or draft horse influence. Bob Brislawn from Oshoto, Wyo., is credited with bringing the Spanish Mustang back from near extinction in 1957. He gathered horses on Indian reservations and worked with the BLM to find the best Spanish Mustangs, bringing them to his 3,000-acre Cayuse Ranch. Brislawn’s son, Emmet, now runs the ranch, where Spanish Mustangs are still raised and sold.
Read more >>

The “End of the Trail” statue, created by sculptor James Earle Fraser (1876-1953) in 1915, is perhaps one of the most poignant examples of the loss of the horse in Native American culture. The rider sits slumped over his exhausted horse, lance held downward, as the pair lean into an unseen wind. But the Native American breeds are still with us, and through ardent breeders and enthusiasts, they will survive not only as living legacies, but also to make their mark in our modern equine world.

Sharon Biggs is a writer and dressage instructor. She is the author of Advanced English Riding (BowTie Press) and In One Arena (Half Halt Press).